As Israeli forces killed more than 100 Palestinians on Sunday, Israeli Prime Minister Benjamin Netanyahu vowed to continue the assault on Gaza for “as long as is required,” citing the backing of foreign allies that has “laid the diplomatic foundation that has given us international credit to operate.” The Obama administration has provided critical support, claiming Israel has acted in self-defense and blaming Hamas for the civilian toll. But on the conflict’s bloodiest day, the White House began showing mild signs of apprehension. President Obama spoke to Netanyahu for the second time in three days and raised “serious concern about the growing number of casualties.” Meanwhile, Secretary of State John Kerry made the rounds of Sunday television talk shows to publicly defend Israel’s assault on Gaza. But in a private phone call caught on camera in between commercial breaks, Kerry appeared to speak sarcastically about the massive civilian toll in the attacks he was publicly defending. The White House says Kerry will travel to Cairo today to work an end to hostilities based on a return to the November 2012 ceasefire. Max Blumenthal, a best-selling author and senior writer for AlterNet, says the Obama administration has practiced “hollow diplomacy” in order to “legitimize Netanyahu’s ground operation and create political space for the kind of massacres that we have been witnessing. … This is an absolute failure of U.S. diplomacy and an abdication of leadership by Barack Obama, who says that he is heartbroken by these images that he is witnessing from the Gaza Strip, as he oversees and authorizes the shipment of the very weapons that are used to bombard hospitals.”

AMY GOODMAN: Max, I wanted to get your comment on what Secretary of State John Kerry was caught on tape saying. He appeared on a whole bunch of U.S. talk shows. While he was on camera and mic’d up for Fox News on Sunday, he had a phone conversation with an aide in which he sarcastically responded to news of an Israeli operation that was captured by the network. Host Chris Wallace played the clip for Kerry calling it an extraordinary moment of diplomacy and asked if Kerry thought Israel had gone too far.

AIDE: Right, it’s escalating significantly, and it just underscores the need for a ceasefire.

SECRETARY OF STATE JOHN KERRY: We’ve got to get over there.

SECRETARY OF STATE JOHN KERRY: Thank you, John. I think, John, we ought to go tonight. I think it’s crazy to be sitting around.

CHRIS WALLACE: Secretary Kerry, when you said, “It’s a hell of a pinpoint operation,” are you upset that the Israelis are going too far? And, in fact, do you intend to go back to the Middle East tonight, sir?

SECRETARY OF STATE JOHN KERRY: I think it’s very, very difficult in these situations, obviously very difficult, Chris. You have people who have come out of tunnels. You have a right to go in and take out those tunnels. We completely support that.

AMY GOODMAN: That was John Kerry on Fox. And again, you heard, in the conversation he had with his aide, questioning the pinpoint bombings, Max Blumenthal.

MAX BLUMENTHAL: I don’t know if this was an accident. This may have been staged by Kerry to save face for his bungled act of hollow diplomacy, which was actually a ruse to legitimize Netanyahu’s ground operation and create political space for the kind of massacres that we’ve been witnessing on this very broadcast. It was Kerry who helped draw up the sham ceasefire proposal, which was introduced by the coup regime of Egypt and Abdel Fattah el-Sisi, who has jailed thousands of Muslim Brotherhood members who are political counterparts of Hamas, who hates Hamas, and who never presented this proposal to Hamas. Tony Blair served as the emissary between Sisi and Netanyahu. And the ceasefire was introduced to paint Hamas as rejectionists. Netanyahu openly declared that this ceasefire and Hamas’s rejection of it gave him all the political legitimacy he needed for the ground invasion.

And now Kerry is criticizing the outcome of the ceasefire proposal that he introduced—the inevitable outcome—and now claiming that he wants to be flown back to the Middle East to negotiate a new ceasefire on the taxpayers’ dime. I call on John Kerry to refund the American taxpayers for all the jet fuel he’s wasted. He can dip into the Heinz family fortune if he needs to do that. This is an absolute failure of U.S. diplomacy and an abdication of leadership by Barack Obama, who says that he’s heartbroken by these images that he’s witnessing from the Gaza Strip as he oversees and authorizes the shipment of the very weapons that are used to bombard hospitals. In Deir al-Balah, the al-Aqsa Hospital was just attacked, and five are dead. Four were in surgery when they were killed.

AARON MATÉ: Max, earlier this month, Israeli Prime Minister Benjamin Netanyahu said that Israel will never give up security control of the West Bank. Of course, the Israeli raids on the West Bank, that helped spark this crisis, followed the unity government between Hamas and Fatah. In agreeing to the government, Hamas obviously was moderating its position somewhat, tacitly endorsing negotiations. How much of this whole operation do you see as an Israeli attempt to cement the occupation, the settlements in the occupied West Bank?

MAX BLUMENTHAL: This is absolutely about cementing the occupation. And Netanyahu and his defense minister, Moshe Ya’alon, have openly declared that their goal is to maintain the occupation perpetually, with full U.S. support. So what we saw after the kidnapping and killing of the three Israeli teens, when Israeli intelligence knew who the suspects were within 24 hours and within 24 hours knew that the teens were dead, was a cover-up. The entire Israeli media was placed under gag, and the Israeli public was convinced that the Israeli military, as it rampaged through the West Bank, was on a rescue operation. The point of this operation was to crush any resistance to the perpetuation of the occupation and to the government of Palestinian Authority President Mahmoud Abbas, who has basically accepted the occupation as the head of the bantustan authority and accepted his role as a subcontractor of the occupation—

AMY GOODMAN: We’re going to have to leave it there. Max Blumenthal, senior writer for AlterNet.org, his latest book, Goliath: Life and Loathing in Greater Israel. Also thank you very much to Rann Bar-On, Israeli peace activist, speaking to us from Haifa.

I’ll be speaking in Hartford tonight at 7:00.

Max Blumenthal on “Goliath: Life and Loathing in Greater Israel” 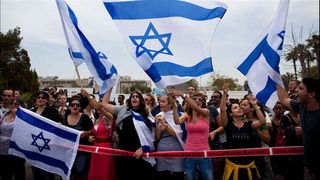 Max Blumenthal on “Goliath: Life and Loathing in Greater Israel”