In May, Sweden’s Feminist Initiative party won a seat in the European Parliament, becoming the first feminist party in history to do so. We are joined by the party’s co-founder, Gudrun Schyman, a former member of the Swedish Parliament. Schyman talks about the Feminist Initiative’s focus on climate change, anti-racism and connecting the violence in intimate relationships to the violence in international relations. “The patriarch structure is global, and it shows in all fields of society, in your intimate relations, in the labor market,” Schyman says. “We have to ban violence, and we have to see that the role of violence is always control, always power.”

AMY GOODMAN: This is Democracy Now!, democracynow.org, The War and Peace Report. I’m Amy Goodman. And we’re broadcasting from a very windy and rainy Visby. That’s the Swedish city of Visby on the island of Gotland in the middle of an event called Almedalen Week, a week-long political festival. Over 25,000 people come here. It’s unlike any other political event in the world. We’ve come to the island to hear these speeches. People come here to take seminars. Politicians from all the country’s parties are here.

Here in Sweden, there are nine political parties with representatives serving in the Swedish Parliament or the European Parliament. They’re the Swedish Social Democratic Party, the Moderate Party, the Green Party, the Liberal People’s Party, the Centre Party, Sweden Democrats, Feminist Initiative, Christian Democrats, Left Party. In May elections, the Feminist Initiative earned over 5 percent of the vote and won a seat in the European Parliament, becoming the first feminist party to do so.

Well, on Wednesday here in Gotland, I spoke to the party’s co-founder, Gudrun Schyman, who used to head the Left Party. I asked her about the founding of the Feminist Initiative.

GUDRUN SCHYMAN: Well, this question is about gender equality, high enough up on the political agenda. So I started discussions with different kind of feminists, from the peace movement, from the environmental movement, from the anti-racist movement. And we were discussing how to do, because women very often has the function of being a lobbyist in their own political parties. And they go together in special women groups, and then they try to have an opinion for the political—the real political questions and the real political party. And we thought it will be a time now to go from the status of lobbyism to parliamentarism. So we created an independent Feminist Initiative with an own independent ideologic platform.

AMY GOODMAN: Now, your party has made it into the European Parliament?

GUDRUN SCHYMAN: Yes, we just did in May. We had election to the European Parliament, and we ran for office. And we had 5.7, I think. We had one member. Sweden has 20 members, and we got one. And that was a big success, absolutely. And now we are going further when it comes to the national and regional and local election, which we all have on the same day in September.

AMY GOODMAN: Talk about the different platforms, the different positions you have in your platform, on everything from military spending to, what, climate change.

GUDRUN SCHYMAN: Yeah, I mean, this is questions that also the other political parties deal with—security policy, defense policy and environmental questions. But we have another knowledge about that we have paternal power in society that makes women, as a group, to be seen as less worth, which means salary gap, which means men’s violence against women—all that what you have all over. It’s a global structure. The patriarch structure is global. And it shows in all fields of society—in your intimate relations, in the labor market. And we connect this idea of violence, that is in our relation, with the idea of violence in the international relations. And we see we had to take a civilistic step forward and ban violence as a tool for solving conflict, because the world is not getting more secure when you have more weapon. And this comes to Sweden, and this comes to our civil society, and this comes to our intimate relations. We have to ban violence, and we have to see that the role of violence is always control, always power.

AMY GOODMAN: So, you’ve proposed a cap on military spending?

GUDRUN SCHYMAN: Yeah, we want to see militarism out from our society. That is the vision. That is the long run. And I think—we think that Sweden should start with cutdowns on military and change the idea of security policy into security policy not for territories, not for countries, not for nation, but for people, which means that we want Sweden to do what the United Nations organization for banning men’s violence against women told their member countries to do: cut spending on military and build a security policy for people.

AMY GOODMAN: For people listening or watching outside of Sweden, they might say that can’t be too hard for Sweden, you know, home of Alfred Nobel, the founder of the Nobel Peace Prize, but it might surprise people to know that Sweden is one of the largest military exporters in the world.

GUDRUN SCHYMAN: Absolutely. And we are criticizing this heavily, because this way of behaving is also—has also the result that poor people don’t get their needs in the countries where we sell weapon to. We sell, for example, these airplanes. JAS, they are called. It was sold to South Africa when South Africa needed the money for educating of and for healthcare for the children. Now it’s Brazil. Brazil has a lot of problems with a lot of poor people. They don’t need airplanes. They need social welfare. So this is very embarrassing, we think. And it’s a contradiction to the idea of cutting military expenses.

AMY GOODMAN: The issue of global warming, how do you propose to deal with it?

GUDRUN SCHYMAN: We have to make sustainable environment way of behaving in every level in society, and we have to work with the tools that we have, which means taxes, which means changing energy systems. We have to go to sun and wind and water. We have very good possibilities in Sweden to do that. But there are different opinions. We don’t want—among the political parties. We don’t want nuclear power, for example. Some political parties want. But we are quite on the same view upon this question as the Green Party, which is now ending the scene back here. It’s their day today.

So, but what makes us different from other political parties is that we put in a lot of knowledge about discrimination, how it works in society, the knowledge about that we have structures in our society that turns people into different positions because of gender, because of ethnicity, sexuality, and things like that. And all this kind of discrimination are working together in the same time. And we have had very clear, the last years, that it is not an equal country, Sweden. Gender equality is not reached. It has also been very clear that we have structural racism. We have a lot of problems with men’s violence against women and things like that.

AMY GOODMAN: You were speaking out here at Almedalen around the issue of the anti-immigrant fervor in some parties. There was a very small protest surrounded by hundreds of anti-racists, but of those who are seriously opposed to immigration.

AMY GOODMAN: Can you talk about how to deal with that in society?

GUDRUN SCHYMAN: Well, we think that we should have—in the long run, we should be a country, Sweden, that is open to people that comes from other parts of the world, people that have to flee from their own situation because of war or other things. And in the long run, it should be possible for people to go free and to come free. And we mean that we are a country, Sweden, that are a rich country. We have a good welfare. We haven’t had a war in our territory the last 200 years. We have the possibility to be generous, and we should make it easy for people that want to come. We should open our doors.

AMY GOODMAN: Gudrun Schyman, co-founder of Sweden’s Feminist Initiative, which recently became the first feminist party to win a seat in the European Parliament, and she could well take a seat in the Swedish Parliament come September.

Dennis Kucinich on the Iraq Crisis & What the U.S. Can Learn from Sweden’s Political Diversity

NEXTDennis Kucinich on the Iraq Crisis & What the U.S. Can Learn from Sweden’s Political Diversity 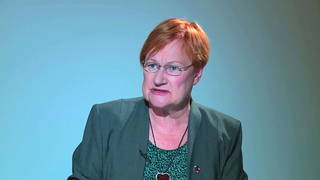