As we broadcast from UNESCO in Paris, we speak with Tarja Halonen, who was elected in 2000 as Finland’s first female president and served until 2012. Her election came about 100 years after Finland became the first European country where women were given the right to vote. In 2009, Forbes named Halonen among the 100 Most Powerful Women in the world. Since leaving office, she has become a prominent advocate for gender equality as well as transparency. She spoke today to mark the International Day for the Universal Access to Information, and we asked her about the country’s cost-effective healthcare system, which she says has given Finland “a lower infant mortality rate, better maternity care than the United States.”

AMY GOODMAN: This is Democracy Now!, democracynow.org, The War and Peace Report. We’re broadcasting from UNESCO headquarters in Paris, France. And we’re ending today’s show with the former president of Finland, Tarja Halonen. She was elected in 2000, becoming Finland’s first [female] president, served until 2012, two six-year terms, the most that a president can serve there. Her election came a hundred years after Finland became the first European country to be given the right to vote to women. In 2009, Forbes named President Halonen among the 100 Most Powerful Women in the world. Since leaving office, she’s become a prominent advocate for gender equality as well as transparency. Earlier today, she spoke here at UNESCO at the IPDCtalks to mark International Day for Universal Access to Information.

President Tarja Halonen, welcome to Democracy Now! In the United States, until Election Day, many thought, in that last few months in the general election, that the United States would have elected their first woman, Hillary Clinton. That didn’t happen. President Trump was elected, a man who a number of women said had sexually assaulted them. He said that he would sue them after the election. That hasn’t happened. But your thoughts on President Trump and also the importance of women being in positions of power?

TARJA HALONEN: So, I have not—I have never met President Trump personally, so my thinking about him is from the media, from his own twittering and all that. But I always say that when my friends in U.S.A. say that Trump won, that, yeah, yeah, won, because you have a funny system, because Hillary Clinton got the most of the votes. In our country, she would win. But that’s another point, and I know it’s very, very difficult. But I think that—

AMY GOODMAN: —but he won the Electoral College.

TARJA HALONEN: Yeah, yeah. So, but I think so that when now the women have been empowered in many countries, and so it’s as though that women have been taken seriously now. So also the contradictions have come much stronger, the hate speeches against the female politicians, journalists, the NGO activists, the human rights defenders and so on. It’s a new tone. But if I want to see something positive in that, it is that now they take us seriously. Earlier, they thought that, OK, you can have some equal choice, but it’s not dangerous. But nowadays it’s a different situation. I said, in Finland, when in foreign ministry, Foreign Service, some 20 years ago, we got more and more women ambassadors—I always said to the men that, “Just don’t worry. Smart men will survive.” And so, that’s it. But I think also that, of course, the competition between the genders have become harder, because it’s more equal possibilities for boys and girls, men and women. And we have to continue in that way.

AMY GOODMAN: I want to talk about healthcare. In the United States, President Trump tried to repeal Obamacare. It looks like the last effort was made this past week, though it’s being repealed, in a sense, in other ways, by starving it. But Bernie Sanders has introduced Medicare for all, the idea of healthcare for all. Finland has a lower infant mortality rate, better maternity care than the United States, highly cost-effective healthcare. Can you talk about how Finland implements healthcare, ensuring the health of its citizens.

TARJA HALONEN: I cannot do it in—very briefly. But I was at Harvard University in Boston in the time when Obamacare was passed, in the time of the previous president. And so, I was very astonished that it was so, so difficult, thinking that it was, of course, a reform, important reform, but compared to the Nordic system, and even with, among Nordic countries, our system, which came—it was the latest, so it’s very modest.

I think that one of the issues is that if you can have a coverage of the public health service for all people, so, of course, you can benefit also of the fact that you do it for all, and you don’t need to select. And, of course, also the financing system is important. I think that one of the problems in U.S.A. is the financing system of the healthcare, that you have so many actors and—in service companies and the others, that put this together is very difficult. But after all, everybody says that not only healthcare, but also other public services which help people being—more well-being, in the long run, they will save money, of course. And I think that everybody is welcome to come and see the Nordic system. There are the differences between the countries, but we are well known for that, that we make it with less expenses.

TARJA HALONEN: I think that this is easier to explain, because we have a full confidence with teachers. So it’s not only the question that, of course, we have the national legislation concerning the targets, the goals of the education system and all the principles. But then the local authorities have the possibility to formulate, fitting to the local circumstances. But then, the schools themselves, they are also really independent. So, they have the school boards. We have the people, parents, but also the local politicians and experts and so on, and the representatives of the pupils. And so I think that this independency, with the very high-quality teachers, that’s the secret. Our teachers, they all get, of course, the university degree, and the institutions can choose so that only 10 percent of the candidates to these institutes will be accepted. So they get the best of the best. And the last point is that this is not very highly paid. It’s about the medium, compared to the other salaries. So I think that the respect concerning education, life-long learning and the teachers is the basis.

AMY GOODMAN: Can you talk about the rise of the right, in the last minute we have together, in Europe right now? I mean, you have the far-right party in Germany, Alternative for Germany, AfD, entering the parliament.

TARJA HALONEN: And we have had this, too. We have the so-called True Finns party, which was a similar. Now it’s splintered in two. But we—

AMY GOODMAN: What about this and the attitude especially to refugees?

TARJA HALONEN: So, I think that one of the reasons was that politics had become too much discussions between—they call it elite, I would say professionals, so that even the language what the politicians and the advisers use was something different what people use in everyday life. And those political parties who has understood to listen the voices of the people have been successful. But I would say that when you listen, you cannot be just an echo. You have to give also the good, smart, true answers for the very often difficult issues. And that’s why I think that all political parties have to start listening more carefully, but also to give the more responsible responses to people, that they understand that this is not like a miracle, like that. And I think that this is also true. So, the highest wave of the populist parties is now coming down. But it doesn’t automatically become better, if we don’t work very hard in order to translate this modern society problems.

TARJA HALONEN: Once is not enough.

AMY GOODMAN: She says, “Once is not enough,” served until 2012. Forbes named her among the 100 Most Powerful Women in the world.

I’ll be speaking Friday night in Winnipeg. Saturday, I’ll be in Halifax, Sunday in Guelph, and then Sunday evening in Toronto. Juan González will be in Kansas City on Friday night. You can check our website. Also, today’s talks at UNESCO in Paris will be live-streamed at UNESCO.org. 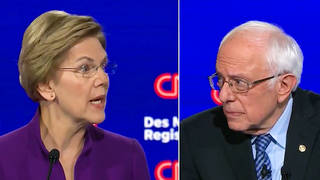