The Progressive magazine and Center for Media and Democracy have released new documents that show billionaire oil industrialist Charles Koch was an active member of the controversial right-wing John Birch Society during its campaigns against the civil rights movement in the 1960s. Charles Koch was following in the footsteps of his father, Fred Koch, a leader of the John Birch Society from its founding. We speak with The Progressive’s Lisa Graves about her new article, “The Koch Cartel: Their Reach, Their Reactionary Agenda, and Their Record.” Graves details how the reactionary ideas absorbed during Charles Koch’s youth continue to animate many of his actions decades later. Charles and his brother, David Koch, have used their wealth to push a similar agenda into the mainstream through the tea party and “dark money” political coalitions that allow donors to shield their identity while funding attack ads against Democrats.

StoryMar 26, 2015Why Is Climate Denier David Koch on the Board of Top Science Museums? Letter Urges Cutting of Ties

AARON MATÉ: We turn now to “The Koch Cartel: Their Reach, Their Reactionary Agenda, and Their Record,” a scathing new look at the Koch family’s role in the ultraconservative John Birch Society. The story appears in the new issue of The Progressive magazine, “Attack of the Plutocrats: The Robber Barons Issue.” It zeroes in on Charles Koch’s roots with the John Birch Society and how he has since used his wealth to push a similar agenda into the mainstream.

Welcome back to Democracy Now!, Lisa. Can you lay out what these new revelations are that you have found out?

LISA GRAVES: Yes, well, thank you so much for having us on. And we’ve been doing research in archives across the country, and what we’ve discovered is not just that Fred Koch, Charles and David Koch’s father, was a member of the John Birch Society and in fact helped found it, but what we discovered in archives is that Charles Koch himself followed his father’s footsteps into the John Birch Society. And that society was a very extreme organization. It was an extreme right-wing organization that spent the '60s largely opposing the civil rights movement here in the United States. And so, these documents, some of the documents we're revealing today, talk about—are, in Charles Koch’s own words, funding for the John Birch Society, trying to support its mission. And what we’ve documented is what that means in context in the civil rights movement, how that organization was trying to stop the civil rights movement, trying to discredit it, opposing the Civil Rights Act of 1964, opposing other progress on integration of our society.

AARON MATÉ: And, Lisa Graves, why is this so significant? Obviously the Koch brothers, billionaires, have a lot of power in this country, but do you see that John Birch legacy still continuing today in the political activities that they fund?

LISA GRAVES: We do. So, even though Charles Koch resigned his life membership and stopped advertising in the John Birch Society publications and promoting its radio shows and fundraising for it in 1968, what we think has happened, based on our other research, is that he’s really advanced those ideas. He has learned to use other language than calling people communists. For example, in his op-ed in The Wall Street Journal earlier this year, he used the term “collectivists” to describe anyone who basically opposes his agenda. In many ways, what Charles Koch has done is put a more sophisticated gloss on the John Birch Society through the organizations that he and his brother have helped fund and fuel and, in fact, really proliferate across this country to try to push these ideas into the mainstream, these ideas that anything that is—anything other than free market fundamentalism is somehow communist or collectivism.

AMY GOODMAN: Lisa Graves, your report features many photos about the Kochs and the John Birch Society that you gathered from public archives in recent months, including one that shows a double billboard they ran in Birmingham, Alabama, in the aftermath of Bull Connor’s attacks on protesters.

LISA GRAVES: Yes, one of the shocking documents that we discovered was that the John Birch Society—the bookstore that Charles Koch was hanging out in Wichita and helping to promote was putting out these pamphlets attacking not just the civil rights movement, but attacking even key photos and moments in civil rights. And so, Joseph—pardon me, in the John Birch Society, the founder, Robert Welch, helped promote the idea that the infamous attack on civil rights activists in Birmingham, where activists were bitten by dogs and hosed by fire hoses, that the dog bite photo was a setup, it was a sham. And so, after the outcry in the nation over the brutality by Bull Connor in Birmingham, Alabama, against civil rights activists and protesters, the John Birch Society started pushing a movement to support your local police. So, in addition to calling for the impeachment of Earl Warren, the chief justice of the Supreme Court, in addition to attacking Martin Luther King as a communist, in addition to suggesting that Rosa Parks was a communist and trained by communists, they also promoted, in the immediate aftermath of those attacks on protesters, a movement to support your local police. Those are the types of materials that were promoted in the 60s, in '64, ’65, ’66, ’67, ’68, attacking the civil rights movement, in fact asking, “What's wrong with civil rights?” and claiming that basically civil rights in the United States were perfectly fine without federal intervention.

AARON MATÉ: Lisa, your piece details this little-known political operation that the Kochs ran in 1996 called Triad. Can you talk about this?

LISA GRAVES: Sure. So, after leaving the John Birch Society and funding a number of other organizations, Charles and David Koch appear to have been involved in an operation called the Triad entity, basically, that was investigated by Congress back before smartphones and Google, and so it’s a little bit of obscure history, but in fact it’s very revealing because the Triad operation in Kansas was designed to use shell corporations, shell entities, to run ads to influence the 1996 races, federal races in this country. It was investigated by Congress. There were efforts to subpoena the people involved in Triad. One of the Republicans shut down that investigation, and later it turned out that part of that operation was largely financed by the Koch family fortune.

And if you fast-forward to just 2012, what you see is that operation on steroids, basically, through the Koch operatives who are running what’s known as Freedom Partners, which is another of these entities that basically operates a bunch of shell organizations or fuels shell groups with pop-up names, basically, to transfer cash, big cash. What we and the American people didn’t discover until almost a year after the 2012 elections was that the Koch brothers and their billionaire buddies had managed to inject nearly a quarter-billion dollars of money into the election through a group called Freedom Partners that no one outside those operatives knew even existed.

AMY GOODMAN: And let’s talk more about Freedom Partners, the Koch-backed political coalition, The Washington Post and the Center for Responsive Politics reporting in January on how it’s designed to shield donors through this labyrinth of 17 tax-exempt groups and limited-liability companies; in 2012 raising at least $407 million for voter mobilization and TV ads attacking President Obama and congressional Democrats. The Koch Industries spokesperson, Robert Tappan, told The Washington Post, “This type of activity is undertaken by individual donors and organizations on all ends of the political spectrum—on the left, the middle, and the right. In many situations, the law does not compel disclosure of donors to various causes and organizations,” he said. Lisa Graves, your response?

LISA GRAVES: Well, this is one of the big issues of our time. In fact, it’s the biggest issue of our time, whether this sort of dark money can be injected into our elections, designed deliberately to influence the results of our elections, and that the American people are kept in the dark about who’s really funding it. We have a long set of campaign finance rules in this country that were designed to make those sorts of direct efforts to help candidates, to promote them, public so that people would know who’s really influencing their elected officials, who’s trying to buy influence with them. And what the Koch brothers and their billionaire buddies and their legal team have done is to try to obscure that information from the American people, to try to hide that information while putting millions, tens of millions, hundreds of millions of dollars into our elections through these groups whose names change. They get fined, and then they pop up with another name, like Center to Protect Patient Rights, which is now American Encore. This is an operation to really hide from the American people the influence of these credibly super-rich people in this country who are trying to distort our policy and dramatically change our democracy for the worse.

AMY GOODMAN: So can you talk about the website that you’re releasing today, Lisa?

LISA GRAVES: Yes. So, we have created a clearinghouse called KochExposed.org that includes a number of profiles about the Koch family fortune, about some of their operations, about groups like this. This is a service, in essence, that we’re offering to the public to make sure that they can learn more about the Koch brothers. They can learn more about these groups that change their names or pop up here and there. And they can help trace the dark money that is being pushed into our elections. As was reported earlier this year, there has been an effort to increase the sophistication of that operation in the 2014 Senate races and governors’ races across the country. And so, we think it’s important for people to know who these Koch brothers are—

LISA GRAVES: —who these billionaires are.

AMY GOODMAN: We’re going to have to leave it there. Lisa Graves is president of The Progressive Inc.

And that does it for our broadcast. We have two job openings: administrative director, as well as a Linux administrator. 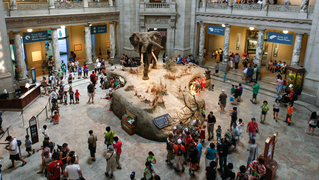