Musician Sting: Why I Am Walking with the Indigenous Bloc in People’s Climate March

The world-renowned musician and activist Sting stops by our three-hour special from the People’s Climate March to talk about why he is marching with indigenous activists on the front lines of the environmental movement. “The indigenous peoples’ message has been consistent from the beginning: We are in danger,” Sting says. “These people are not complacent, I am not complacent. We have to do something.”

StoryMar 28, 2017Rebecca Solnit on Climate Change, Resistance, Misogyny and “The Mother of All Questions”

STING: Hello, my darling. How are you? Nice to be here.

AMY GOODMAN: So, what are you doing here?

STING: Well, I’m with the indigenous group here, you know, and they’ve always been at the forefront of this struggle, and I think it’s right that they’re at the front of it. Their message has always been the same: The planet’s in danger, and you better wise up. And you know there’s a very, very well-financed, well-organized campaign to sow complacency about climate change, at the behest of oil companies and its propaganda. These people aren’t complacent. I’m not complacent. We have to do something. Today is the day.

AMY GOODMAN: And why march with indigenous people? Talk about your involvement. People certainly know you as a musician, but you’re also a major global environmental activist.

STING: Well, you know, the indigenous peoples’ message has been consistent from the beginning of this thing, and they’re saying, “We’re in danger.” And what endangers them in their homelands endangers us here in New York City. It’s the same planet. It’s a consistent and very simple message, and that’s why I’m with them today.

AMY GOODMAN: You spend time with world leaders who are in awe of you. What do you tell them?

AMY GOODMAN: Or who have rocked out to you. What do you tell them?

STING: Only what I’m telling you now: Listen to the people who know, which is the indigenous community here.

AMY GOODMAN: Do you think President Obama is doing enough?

STING: No, I don’t think anybody’s doing enough, frankly. I think, you know, we need to really pool our resources to make sustainable energy a reality. You know, the world is full of energy. We have solar power, wind. We can do more than just dig oil out of the ground and destroy the climate.

AMY GOODMAN: There’s a U.N. climate summit on Tuesday. Your thoughts about that? There’s concern about the level of corporate involvement.

STING: Yeah, well, a lot of corporations will pretend they’re trying to save the planet, and they’re doing the opposite. So, I have no patience with that kind of whitewash. But we’ve got to be careful.

AMY GOODMAN: There is an interesting irony here, as the gathering is here at Columbus Circle and it’s the indigenous people of the world who are leading this march and will be passing the Christopher Columbus statue. We’re joined right now by Sonia Guiñansaca of CultureStrike. Did I pronounce your name correctly?

AMY GOODMAN: So, Sonia Guiñansaca, you’re wearing a T-shirt that says, “Undocumented, Unafraid, Unapologetic.” That is really the motto of the DREAMer and immigrants’ rights movement. How does that relate to climate change?

SONIA GUIÑANSACA: Yeah, so, I’m actually here with CultureStrike, and we’re a national network of artists, musicians, that focus on migrant justice. And so, one of the things that we wanted to showcase is that climate change affects, you know, front-line folks like migrant communities, where there’s a forced migration happening. And so, we want to acknowledge that, but also say, you know, we’re here, we’re unafraid, we’re here also to fight for Mother Earth.

KIMBERLY COLLINS: Hello. My name is Kimberly Collins [phon.]. I live in Redfern Houses in Far Rockaway, Queens. It’s a NYCHA development. And we didn’t get that much of an impact as down the beach in Far Rockaway, but we’re here for everyone that suffered in Sandy.

AMY GOODMAN: What does climate change mean to you?

KIMBERLY COLLINS: The climate change means to me, my grandchildren may have to—may not have the same things I was able and took advantage of. And they might have to come outside in masks and things like that, come 25, 30, 50 years. So I’m out here so my grandchildren and everybody else’s grandchildren can live a good life and breathe good air and have lakes and all that good stuff.

AMY GOODMAN: Thank you very much. Dr. Steffie Woolhandler, what’s a doctor like you doing in the streets of New York?

DR. STEFFIE WOOLHANDLER: Well, there’s several hundred doctors in the physicians’ contingent, medical students, as well. And we’re here because this is a—global warming is a health crisis. We’re seeing—we saw tens of thousands of deaths from cholera related to algae blooms. We’ve seen the mosquitoes that carry malaria and dengue fever moving north and moving to higher elevations. We saw a thousand people die in New Orleans because of a hurricane. There’s no way the healthcare system can deal with this problem alone. We need to be working to stop global warming now. 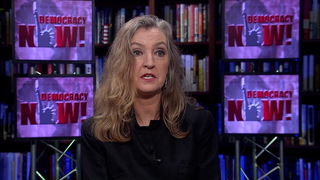 Rebecca Solnit on Climate Change, Resistance, Misogyny and “The Mother of All Questions”