As many as 400,000 people turned out in New York City on Sunday for the People’s Climate March, the largest environmental protest in history. With a turnout far exceeding expectations, the streets of midtown Manhattan were filled with environmentalists, politicians, musicians, students, farmers, celebrities, nurses and labor activists — all united in their demand for urgent action on climate change. Organizers arranged the People’s Climate March into different contingents reflecting the movement’s diversity, with indigenous groups in the lead. Democracy Now! producers Aaron Maté and Elizabeth Press were in the streets to hear from some of the demonstrators taking part in the historic protest.

AMY GOODMAN: We turn now to the People’s Climate March. Organizers estimate as many as 400,000 people marched in New York Sunday in the largest climate protest in history. The turnout far exceeded expectations. Other marches and rallies were held in 166 countries. More protests are planned for today. Climate activists are gathering today in downtown Manhattan for a mass sit-in dubbed “Flood Wall Street.” The actions are timed to coincide with the United Nations climate summit taking place here in New York Tuesday. President Obama and over 100 other world leaders are scheduled to attend.

Sunday’s events in New York began with an indigenous sunrise ceremony in Central Park. Indigenous activists then led the march. Democracy Now!'s Aaron Maté was in the streets at the People's Climate March.

AARON MATÉ: We’re near the very front of the People’s Climate March, and the sign behind me reads: “Front Lines of Crisis, Forefront of Change.” This march has been divided up into different groups, and at the front are indigenous and front-line communities most impacted by climate change.

CLAYTON THOMAS-MULLER: Hi. My name is Clayton Thomas-Muller. I’m an organizer with the indigenous peoples’ social movement Idle No More and Defenders of the Land. Things today are going really, really well. We’ve got tens of thousands, if not hundreds of thousands, of people on the street. We have front-line indigenous communities from communities that are disproportionately affected by President Obama’s all-of-the-above energy policy. We’ve got leaders from communities fighting fracking, fighting tar sands, pipelines, all kinds of pipeline fighters from across the continent who are organizing in solidarity with First Nations from the belly of the beast in Alberta who are trying to stop tar sands expansion at the source. And we’re here to send a very clear message to President Obama, Stephen Harper and the rest of the world leaders that we need legally binding mechanisms on climate change right now passed, and if they ain’t going to do it, that the people certainly will.

INDIGENOUS ACTIVIST: Hi. We’re here to march for the next seven generations and to take astand against Big Oil companies that are coming through our territories and trying to take our ancestral lands and destroy them. We’re here because it’s going to take all of us—all of us—not just the indigenous people, but everyone in the whole world, to come together to save our water.

PERUVIAN ACTIVIST: We are from the Peruvian delegation here on the March. And we are marching because we are fighting for climate justice, and we are fighting because this December, the next COP event is going to be in our country. And we are preparing a people’s summit and the next march in December 10 in Lima. And we are asking the Peruvian government, Ollanta Humala, for coherence, because even if they are taking pictures here near Ban Ki-moon, they are not doing that kind of commitments in the country. So, we need to fight here, we need to fight in our country. This is a global fight.

EL PUENTE ACTIVIST: Who are we?

EL PUENTE ACTIVIST: What do we stand for?

FRANCES LUCERNA: My name is Frances Lucerna. I’m the executive director of El Puente. We have about 300-strong here of our young people. We are a human rights organization located in Williamsburg, Brooklyn. Most of our young people are from Puerto Rico, from Dominican Republic. And the connection between what’s happening in terms of our islands and also what’s happening here in our waterfront community that Williamsburg is part of, we need, really, the powers that be to come together with our people and really make decisions that are about preserving our Earth.

IRENE JOR: My name is Irene Jor. I’m with the National Domestic Workers Alliance with the New York domestic workers here today. And for us, we’re here because, as domestic workers, it’s time to clean up the climate mess.

IRENE JOR: Domestic workers have been part of the struggle for a long time. We’re disproportionately impacted by climate change. For those of us who are migrant women workers, we often come here because of what extractive resources and climate crisis has done to our home countries.

JONAH FELDMAN: It says, “Divest from Climate Change.” We believe that our university should sell off all its investments in the fossil fuel industry—that’s in coal, oil, natural gas, tar sands—and to reinvest into clean, renewable alternatives.

LUIS NAVARRO: Hello. My name Luis Navarro. I’m 16. I’m from Boston, Massachusetts. I’m with the Boston-area Youth Organizing Project. Well, as a youth, I feel like every youth should be a part of this, because it concerns them and their future, whether or not if they can live by 20 years from now with this climate change. And I feel like it’s important for me to be here to show them that the youth is on our side.

AARON MATÉ: As we weave through this march that has taken over midtown Manhattan, tens of thousands out in full force, coming across all different sorts of diverse groups.

REV. SUSAN DE GEORGE: I’m Susan De George, and I’m with both Green Faith and with Hudson River Presbytery. We have everybody from Jains, Sikhs, Buddhists, Hindus, Catholics, Protestants, atheists, agnostics, all marching in a group.

PROTESTERS: What do we want? Climate justice! When do we want it? Now!

CAITLIN CALLAHAN: My name is Caitlin Callahan. I’m from Rockaway Beach, and I’m an organizer with Rockaway Wildfire. Superstorm Sandy devastated the Rockaway Peninsula. We know that climate change is being worsened and exacerbated by all of the systemic profiteering that’s happening throughout our world. And it’s time for that to stop. If you haven’t been involved in climate justice activism before, it’s time to get involved in climate justice activism, because this is affecting all of us.

BRADEN ELLIOTT: My name is Braden Elliott. I’m a Ph.D. student at Dartmouth College, and I’m here because I care.

AARON MATÉ: And the banner under which the scientists are marching is “The Debate is Over”?

BRADEN ELLIOTT: Correct. The banner says “The Debate is Over” because the core part, the part that the planet is warming and that humans are responsible for the lion’s share of it, is settled. There’s always debate to be had on the edges of a large topic, but the call to action is very clear.

AARON MATÉ: And now we’re in the bloc of demonstrators under the banner of “We Know Who is Responsible,” anti-corporate campaigners, peace and justice groups, those who are organizing against the groups they say are holding back progress.

SANDRA NURSE: My name is Sandra Nurse. I’m here with the Flood Wall Street contingent. We’re calling on people to do a mass sit-in in the financial district to highlight the connections between corporate capitalism, extractive industries, the financing and bankrolling of climate change, the financing of politicians who will not bring meaningful legislation to the table and who are blocking the process of actually bringing meaningful legislation against climate change.

AMY GOODMAN: Some of the voices from the 400,000-strong People’s Climate March here in New York. Special thanks to Aaron Maté and Elizabeth Press in the streets for Democracy Now!

Singer Angélique Kidjo: The Women of Africa Are Paying the Price of Climate Change

NEXTSinger Angélique Kidjo: The Women of Africa Are Paying the Price of Climate Change 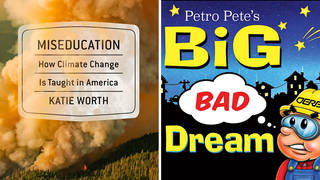