As President Obama hosts Mexican President Enrique Peña Nieto at the White House today, human rights groups want Obama to press the Mexican government on its failure to investigate and prosecute abuses by state security forces. The meeting comes on the heels of an explosive new report that directly contradicts the Mexican government’s claims they were unaware of what happened the night 43 students went missing after an attack by local police in the state of Guerrero. According to the Mexican magazine Proceso, federal police played a role in the attack, and federal authorities likely tortured key witnesses. The case has ignited protests across Mexico and around the world. We are joined by the reporters who broke the story, Anabel Hernández and Steve Fisher. Hernández is a leading Mexican investigative journalist and author of “Narcoland: The Mexican Drug Lords and Their Godfathers.”

AARON MATÉ: President Obama is meeting with Mexican President Enrique Peña Nieto at the White House today. The two leaders will reportedly focus on expanding dialogue and cooperation on economic, security and social issues. However, human rights groups want Obama to press the Mexican government on its failure to investigate and prosecute abuses by state security forces.

Two recent atrocities have drawn international media attention and sparked large-scale protests in Mexico. The first was the killing of 22 people by soldiers in Tlatlaya, Mexico state, in June. The second was the disappearance of 43 students in Iguala, Guerrero, in September.

Since 2007, the U.S. has provided Mexico with more than $2 billion in funding through the Mérida Initiative, a joint U.S.-Mexico effort to combat organized crime. Fifteen percent of that aid is supposed to be contingent on Mexico meeting human rights guarantees, but President Obama has signaled he won’t push Peña Nieto on the issue.

AMY GOODMAN: Meanwhile, an explosive new investigative report out of Mexico says federal authorities were involved in the disappearance and killing of the 43 students. The report was published in the Mexican magazine Proceso and is called “Iguala: The Unofficial Story.” It directly contradicts Mexican government claims they were unaware of what happened. According to the report, federal authorities likely tortured key witnesses who offered critical testimony for an investigation by the Mexican attorney general’s office into the disappearances.

For more, we go to Berkeley, California, where we’re joined by the authors of the exposé, Anabel Hernández and Steve Fisher. They’re both fellows at the Investigative Reporting Program at UC Berkeley Graduate School of Journalism. Anabel Hernández is a Mexican investigative reporter who was awarded the 2012 Golden Pen of Freedom award. Her latest book, Narcoland: The Mexican Drug Lords and Their Godfathers, was recently published in English.

We welcome you both to Democracy Now! Anabel, you’re really in exile here in the United States, fearing for your life in Mexico. Talk about this explosive exposé on who you believe is involved in the missing students—in the case of the missing students.

AMY GOODMAN: Anabel Hernández, at one point—your report is accompanied by a short compilation of videos that students took on their cellphones the night of the attack. At one point, voices in the footage shout, “Don’t shoot!” and “Get down!” in Spanish. Toward the end of the video, the students quietly talk to each other, saying, “The police are leaving. The federal—police—are going to stay. They’re going to hassle us.” Let’s go to part of that video compilation.

AMY GOODMAN: It is chilling, Anabel Hernández. Can you describe what happened, what you understand happened on that night of September 26 last year?

ANABEL HERNÁNDEZ: Well, what happened was that at 6:00 p.m. the students left the school in Ayotzinapa to go to the road between Chilpancingo and Iguala to kidnap some buses to go to Mexico City on October 2. And then, when they arrive to very near to Iguala, the federal police was waiting for them and were monitoring them. Then, they went to the bus station to take some buses, and at the end of the day were five buses. In two buses, the students take one way, and in the other three buses, the students took another way. So, the federal police and the municipal police attacked to the students, to the three buses in the middle of the city of Iguala.

Wasn’t true the version of the federal government that in that moment the mayor, Abarca, and his wife was in a political meeting in that moment in downtown. That was false. What we found is that the political event already finished two hours before the attack. So, when the students crossed through the downtown in Iguala, Abarca and his wife didn’t was there. So, at the end of the street, the municipal police closed the road, stopped the three buses, and in the back, the federal police arrived. In the moment of the attack were the two polices, but now the federal government, the official government, just accused to the municipal police and have been hiding the participation of the federal police.

AARON MATÉ: Anabel, as we said, you are alleging complicity at a very high level, and it contradicts the official Mexican government’s story. What evidence do you have, aside from this video that we just saw? What are you basing this report on?

ANABEL HERNÁNDEZ: We have access to the investigation that make the government of Guerrero. We have access to all the files. I mean, the first testimonies that the students gave to the authorities just few hours after the attack. I mean, the very fresh testimonies. In these testimonies, the students very clearly said that the federal police participated in the attack. Also, we have access to the criminal file of the attorney general office. And in this file, you can see all the contradictions, but also you can see how the government tortured to the most important witness to build the official version, to create the official version. And also, we have testimonies of the people that was in that street when the attack happened. I mean, we went to Iguala. We talked with many people, because in this street where the attack occurred was where exist many business, local business—you know, pharmacy, drug stores, restaurants, bars, that kind of business. And we were—neighbors, many neighbors. And we were able to talk with these people and with the students about what really happened that night.

AMY GOODMAN: Steve Fisher, you did a report along with Anabel Hernández. Explain further what we just saw and heard in this video, and then what happened to the witnesses, how you know that eyewitnesses were tortured.

STEVE FISHER: So what you see in the video, in addition to what you mentioned, Amy, where they speak of the federal police harass—likely to harass the students, in addition, further on in the video, they are yelling at the police. And in the video, it’s important to note, you don’t see the police clearly, but they are essentially yelling at them, saying, “Why are you picking up the gun shells? You know what you’ve done. You know that you’re guilty. Why are you picking up these gun shells?” And I think that further shows the efforts of the police that night to cover up exactly what they did.

And in regards to the witnesses that were tortured, we have the medical examinations of these witnesses that show that there were severe beatings, brutal, brutal beatings, including electric shocks to various parts of the body. And then we also have the documentation of these same witnesses denouncing this torture prior to—prior to their testimony. And it should be noted that the officials that tortured these individuals were the marines, the military and the federal police.

AARON MATÉ: And, Anabel, the motive, in your view, for this attack? These students were from a very politically engaged school. Was that a factor in why you think they were targeted?

ANABEL HERNÁNDEZ: Well, you have to really understand what is the meaning of this school. This school—from this school, one of the members of this school in the decade of the ’60s was Lucio Cabañas. And as you know, Lucio Cabañas was a member of a guerrilla in Mexico. And these students still having that spirit in Mexico. If you went to the school and if you get in, in their circle, you can see that these students really believe in this kind of protest, you know?

AMY GOODMAN: Anabel and Steve, we have less than a minute to go, and I want to ask, in today’s meeting—

AMY GOODMAN: —between the Mexican president, Peña Nieto, and Obama in Washington, what do you want to see happen? We’ll start with Anabel and then to Steve. You each have 15 seconds.

ANABEL HERNÁNDEZ: It’s important to consider that in these last four years since the Plan Mérida was signed, the money of the government of U.S. have been empowering these federal police, the militias, and also the marines that didn’t—really don’t want to respect the human rights in Mexico, and abuse of their force against the society. So, I think that the U.S. government have to ask about this.

STEVE FISHER: I believe that the—it’s clear that the attorney general and the president of Mexico are unable to bring this case and bring justice for the families. And I believe today when President Peña Nieto meets with Obama, I believe it’s import for Obama to encourage and insist on an open investigation, along with international community.

AMY GOODMAN: We want to thank you both for being with us. Anabel Hernández, Steve Fisher co-authored the new investigation, “Iguala: The Unofficial Story.” We’ll link to the report at democracynow.org. 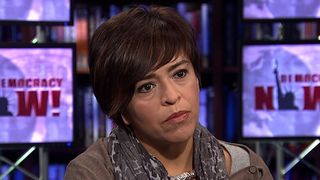