“We Are Scared, We Are Grieving”: Muslim Activist in Paris Condemns Attacks, Rising Islamophobia

Reports of Islamophobia have already emerged following the Paris attacks, and fears of attacks on Muslims in Paris have risen. After al-Qaeda-linked gunmen attacked the magazine Charlie Hebdo in January, there were nearly as many anti-Muslim incidents in the two weeks following the attacks as there were in all of the previous year. More than 220 anti-Muslim acts were recorded in the first quarter of 2015, a sixfold increase over the same period the previous year. The incidents included violent assaults and destruction of Muslim places of worship. For more, we speak with Yasser Louati, spokesperson and head of the International Relations Desk for the Collective Against Islamophobia in France (CCIF).

AMY GOODMAN: Reports of Islamophobia have already emerged following the Paris attacks, and fears of attacks on Muslims in Paris have risen. Back in January, after al-Qaeda-linked gunmen attacked the magazine Charlie Hebdo, there were nearly as many anti-Muslim incidents in the two weeks following the attacks as there were in all the previous year. More than 220 anti-Muslim acts were recorded in the first quarter of 2015, a sixfold increase over the same period the previous year. The incidents included violent assaults and destruction of Muslim places of worship. This is Nabil, a Muslim resident of Aulnay-sous-Bois, talking about the Paris attacks.

NABIL: [translated] Religious terminology cannot be used to describe these individuals. I would call them terrorists and only terrorists, not jihadists nor Islamists, because they are terrorists. I was 100 meters from the first explosion. The bomb would not have differentiated between a Muslim and a Buddhist. So they are terrorists. And my thoughts are with the families.

AMY GOODMAN: For more, we’re joined in Paris by Yasser Louati, spokesperson and head of the International Relations Desk for the Collective Against Islamophobia in France.

Welcome to Democracy Now! Thank you for leaving the rally to come speak with us as you stand in front of the theater that was the site of the greatest carnage. Can you talk about your response to what happened? What are the calls at the rally you were just at?

YASSER LOUATI: I mean, the rally was called, like it was a spontaneous initiative by the Muslim minority in France. You know, we have been working on this for the past two days, and now we managed to bring everybody from all across the greater Paris area and, of course, outside of the city. Of course, we came here to share our grief, our pain and our outrage. And as the person right before me said it, these terrorists made no distinction between Muslims and non-Muslims. And as, you know, an organization fighting Islamophobia, we receive accounts of Muslim families just torn into pieces because their relatives were either killed at the concert hall or around it. So, definitely, it’s a message of unity. And the worst we could do is to show a division amongst us as French people.

AMY GOODMAN: Can you talk about whether there has been escalated violence or attacks on Muslims right now in Paris?

YASSER LOUATI: Yes, definitely. Unfortunately, as we were still receiving reports of the first attack, within 30 minutes a right-wing columnist started putting the blame on the Muslim community. Like this is the utmost sign of indecency, blaming Muslims and asking them to take to the street and show solidarity, when Muslims themselves are the first targets of these terrorist organizations abroad and now here in France. And, of course, throughout the night, we received countless reports of death threats being sent to the Muslim community. And by 5:00 in the morning, we had to literally like, you know, call for someone to open the office, because the first mosques were attacked. We also received reports of Muslim shops being vandalized.

And of course—but at the same time, we received lots and lots of messages of support from non-Muslims, telling us, “We are in this together. You don’t have to justify yourself. You don’t have to feel guilty or even say, 'Not in my name.' It was not you. It was them.”

But unfortunately, we still had some criminal groups, like, for example, who targeted a young man like 24 hours ago and literally lynched him. There were like six people like, you know, beating him and making him pay for—so they say, for what happened. We had Muslim families hiding in shops because they were being chased.

But at the same time, we still have support, on the other hand. So, we—we are scared, we are grieving. Many of us believe that we don’t have the right to cry our deads, even though we keep saying that it is the wars of our governments that make us bury our deads here. But we still rely on our country to stay united.

AMY GOODMAN: I think this is a key point, Yasser Louati, that you are raising, that Muslims by far outnumber any other group when it comes to being targeted by ISIS. ISIS has killed more Muslims than certainly members of any other religion.

YASSER LOUATI: Definitely, like if they hit Beirut right before hitting Paris. And before that, I mean, like they have been killing Muslims by the thousands in Syria and Iraq. You know, what Islamic—I mean, like, how can they call themselves so-called Islamic, when they are first targeting Muslims? I mean, you know, there is—it’s not even religion. It’s an ideology based on hatred and a political agenda to impose their vision of the world. At the same time here, Muslims are saying, “You are not one of us. We have nothing to do with you. And we can’t say, 'Not in my name,' because you are not us, and we are not you.” So, what can I say, Amy?

YASSER LOUATI: These are times of grief, and we still—

NIHAD AWAD: We are revolted by this heinous and despicable attack on civilian populations. And our response to ISIS should be swift, should be methodical and should be principled. Our focus should be on the victims of these attacks. In fighting ISIS, we should remind ourselves to stick to our principles and not descend to their level. We hear talks about closing the borders to refugees. And let’s remember that these refugees have been running away and fleeing the attacks of ISIS and the killing machine of Bashar al-Assad.

AMY GOODMAN: That is CAIR Executive Director Nihad Awad in a news conference in Washington, D.C., on Saturday. We’re speaking with Yasser Louati, a spokesperson for, the head of the International Relations Desk for the Collective Against Islamophobia in France. We’re speaking to him in front of the theater that was the main site of the attack on Friday night by ISIS. Yasser Louati, Nihad Awad mentioned refugees. And it seems that what’s going to—one of the things coming out of this is an extreme crackdown on refugees. Can you talk about this?

YASSER LOUATI: I mean, as Mr. Awad said it right before us, those refugees are fleeing the exact same people who hit us here in Paris, and they can’t be blamed for fleeing the bombs that are being sent by these terrorist groups and at the same times by the various governments who contributed to destabilizing their respective countries. I mean, like I can speak for myself, for a son of Paris. The refugees I kept seeing every day by the highway or by the belt disappeared. God knows where they are, because they are scared to death. And people now are pointing fingers at them, when, first, France didn’t welcome that many of them, unlike Germany or other European countries. And on the other hand, how can we blame them for what happened? What is their guilt? What is their crime? They came here seeking refuge just to live. Let them live. And this is our call to the government. We cannot put the blame on the weakest ones amongst us.

AMY GOODMAN: How are the anti-terror laws, leading up to this weekend, affecting the Muslim community?

YASSER LOUATI: Unfortunately, we have the feeling that Muslims have been used as scapegoats to justify a crackdown on individual freedoms. I’m a fervent believer in individual freedoms and the right for privacy and the right to live without government surveillance. But these measures have been passed in the wake of the January attacks. But the problem is that every single terrorist identified or apprehended was already on a watchlist. And as we speak right now, the government is revealing names that were already on a government watchlist. So it’s not a—we don’t need any more liberticide laws. We need more cooperation within the government, so information services and the police can do their job. So, right now, the French people are paying a high tribute through a scapegoat named the Muslim community. And so far, we haven’t seen any positive result, just as we haven’t seen any positive result from the wars we have been waging for the past 15 years abroad.

AMY GOODMAN: What do you think needs to be the response right now? François Hollande said that he will wage a pitiless war. The immediate response was French airstrikes on Raqqa, where hundreds of thousands of civilians, of course, live—also, they say, the headquarters of the Islamic State.

YASSER LOUATI: I will quote to you former Foreign Minister Dominique de Villepin, who said, “You don’t win a war on terror through conventional armies. It doesn’t work. We’ve been failing for 14 years now. It does not pay off. We only contributed for further destabilization of countries and the emergence of these groups.” Look at what’s going on in Mali. Look at what’s going on in Yemen, now in Syria, the collapse of Iraq. Everything became—all those places became theaters for the rise of these terrorist groups. It does not work. The solution is only political. That’s a problem.

AMY GOODMAN: And, Vijay Prashad, I’ll give you the last word on that issue of what is the alternative. What if war were not an option?

VIJAY PRASHAD: Well, the first thing I would like the French to do is to reconsider their $10 billion arms deal with the Saudis, which is making it very difficult for them to maneuver an actual sober policy vis-à-vis Saudi funding and ideological support to both ISIS and ISIS-type figures. Until that happens, I’m afraid it’s just basically speciousness.

AMY GOODMAN: I want to thank you all for being with us, Vijay Prashad, professor of international studies at Trinity College. I want to thank our guest in Paris right now, standing in front of the theater that was the site of the carnage, Yasser Louati, spokesperson for, the head of the International Relations Desk for the Collective Against Islamophobia in France.

Also I want to let people know Juan González will be interviewing Lin-Manuel Miranda at NYU. Check our website. 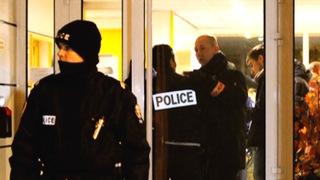