A major rally in Paris on the eve of the U.N. climate summit was canceled after authorities banned public protests in the aftermath of this month’s Islamic State terror attacks. But on Sunday, tens of thousands of people formed a human chain stretching for blocks. After the human chain action ended, thousands of Parisians and international activists defied the French ban on protests and tried to march through the downtown streets. They were met by hundreds of riot police, who used tear gas, sound bombs and pepper spray. More than 200 protesters were arrested. Democracy Now! was live on the scene interviewing people throughout the streets.

AMY GOODMAN: Back in Paris, France, activists installed thousands of pairs of shoes in front of the Place de la République in downtown Paris, only blocks from where the November 13th shooting happened at the Bataclan, occurred—to symbolize the desire to march. Yannick, a French citizen who donated her shoes to the installation, said she felt it was important the protesters’ presence was felt.

YANNICK: [translated] I find it very moving. It is a very strong message. As we do not have the right to take part in the large march which was organized, it was important that our presence was felt. All of these shoes represent all the people who are committed to do something for climate change, to do something this week, when there will be a lot of debate.

ROMAIN PORCHERON: [translated] The idea is to show that all citizens of the world are aware, and the common environmental and ecological objective is not individualist. It is about solidarity and the sharing between populations, that we are all in the same boat. That is planet Earth. If each one of us accept taking one step forward to change little habits, which then evolves into systematic change, we will be able to solve the crisis of climate change, which threatens the entirety of humanity.

AMY GOODMAN: Indigenous people from the Arctic to the Amazon took part in the human chain in Paris, calling for urgent action on climate change and highlighting the disproportionate impact of global warming on frontline communities. After the human chain action ended, thousands of Parisians and international activists defied the French ban on protests and attempted to march through the streets of downtown Paris. They were met by hundreds of riot police, who used tear gas, sound bombs, pepper spray, in an effort to break up the demonstration in the Place de la République. More than 200 protesters were arrested after police with shields and riot gear stormed the monument at the Place de la République, trampling on the flowers and candles commemorating the November 13th attacks, and forcibly removing protesters who had linked arms around the statue to protect it. Democracy Now! was live on the scene interviewing people throughout the protests.

PROTESTER 1: I’m here because I wanted to walk for the climate. Convention don’t consider the citizens’ opinion and what citizens want to do. They prefer shoot us than listen to us.

PROTESTER 2: We’re here at République, where demonstrators in the hundreds—it’s hard to say how many—have gathered. The police response has been tear gas and these sound bomb canisters that they’re dispersing into the crowd.

SHEILA: I’m Sheila. I’m from Oakland, and I’m here because it’s supposed to be the most important climate negotiation of all time. I was an environmental studies student, and they just constantly talked about COP21. And if something didn’t happen this year, if a negotiation wasn’t made that was binding, then we would see drastic effects of climate change that would be irreversible.

JEN: We are in the Place de la République in Paris. It’s demonstrating after the climate demonstration. And so now we gather to focus on also state of emergency, and plus climate change. And actually, the cops are just sending gas bombs on us.

PROTESTER 3: We are just on the—right in front of the statue. And this statue is important for us, and more important today because there are many candles on the statue, and we want to protect it. I’m not so much in demonstrations, and—but this time, when I understood that the French state, French government, used the law, they began attacking the left activists. And it’s just incredible that so many people in France don’t understand what is happening, everything that is going to slide—to switch from fight against terrorism to a fight against citizens.

LAURA GOTTESDIENER: If the COP is opening tomorrow, what is your message on climate change?

PROTESTER 1: There are the terrorists. They are shooting us.

PROTESTER 6: What I am doing here is clear. I don’t—I protest against the emergency state, which is a parody of protection for the citizens, and it’s transformed into repression against the citizens.

PROTESTER 4: As you can see, they’ve blocked off every entrance around République. And they won’t let us go anywhere.

PROTESTER 6: Several friends of us have been arrested.

PROTESTER 4: We can’t give too much information, but repression in our circle has been quite extensive.

JEN: My name is Jen. I live in Paris, and I’m a militant for environment. I have no hope in events like COP, because, you know, they have partners, like EDF, like BIC, like IKEA, like Carrefour, which are—like L’Oréal, which are enormous polluters, no? Air France is like planes everywhere. BIC is disposable stuff. IKEA, it’s planned obsolescence. I have a panel, which is written, “Right to demonstrate,” because here in Paris today, we’re not supposed to demonstrate, we don’t have the right. The march has been forbidden. But still we are here. And we make some noise.

PROTESTER 7: The government shouldn’t be using fear to stop us to protest what we believe in. COP21 has been scheduled for a very long time. Even before the attacks, they decided to increase security at the borders. This isn’t about terrorism. I’m here to fight fear and the use of fear.

AMY GOODMAN: More than 200 people were arrested. French President François Hollande condemned the clashes between protesters and police as, quote, “scandalous” and blamed the protesters for trampling on the monument, even though video footage shows the police smashing the glass candles and trampling on the flowers. Activists said that actions and demonstrations would continue throughout the summit. Special thanks to Sam Alcoff, Laura Gottesdiener and John Hamilton for that report. We’re going to break. When we come back, we’ll hear from indigenous activist Tom Goldtooth and his son, Dallas, of the 1491s, best-selling author Naomi Klein, French farmer José Bové and more. Stay with us.

“I am Paris, I am Bamako, We are Humanity”: Memorial at Bataclan Theater Honors Attack Victims

NEXT“I am Paris, I am Bamako, We are Humanity”: Memorial at Bataclan Theater Honors Attack Victims 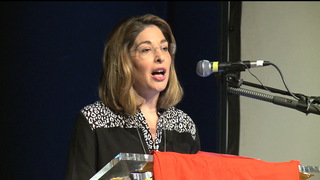