“A Devastating Decision”: No Charges for Border Guards in Beating, Taser Death of Mexican Immigrant

The Department of Justice has announced no border agents will be prosecuted for their role in the killing of a Mexican immigrant near San Diego even though eyewitness video showed him being beaten and tasered. The incident occurred in May 2010 when 32-year-old Anastasio Hernández Rojas was caught trying to enter the United States from Mexico. He had previously lived in the United States for 25 years and was the father of five U.S.-born children. The San Diego coroner’s office classified Anastasio Hernández Rojas’s death as a homicide, concluding he suffered a heart attack as well as “bruising to his chest, stomach, hips, knees, back, lips, head and eyelids; five broken ribs; and a damaged spine.” Agents say they confronted Hernández Rojas because he became hostile and resisted arrest. But eyewitness video raised many questions. We are joined by Andrea Guerrero, co-chair of the Southern Border Communities Coalition and executive director of Alliance San Diego.

AMY GOODMAN: The Department of Justice has announced no border agents will be prosecuted for their role in the killing of a Mexican immigrant near San Diego, even though eyewitness video showed him being tased and beaten. The incident occurred in May 2010 when 32-year-old Anastasio Hernández Rojas was caught trying to enter the United States from Mexico. Hernández Rojas had previously lived in the United States for 25 years from the age of 15. He was the father of five U.S.-born children. Agents say they confronted Hernández Rojas because he became hostile and resisted arrest. But eyewitness video raised many questions. The footage was obtained by reporter John Carlos Frey and aired in a 2012 PBS report by correspondent John Larson.

JOHN LARSON: What U.S. border agents did not realize is that eyewitness videos of the incident caught the sounds of Hernández Rojas screaming and pleading for his life.

JOHN LARSON: And now, a never-before-seen eyewitness video of the incident raises new disturbing questions. The dark video reveals more than a dozen U.S. border agents standing over Hernández Rojas. It shows the firing of the Taser. Was Hernández Rojas, as the police press release suggested, combative when he was killed? Or was he on the ground, handcuffed?

AMY GOODMAN: Video from the PBS program Need to Know. The San Diego coroner’s office classified Anastasio Hernández Rojas’s death as a homicide, concluding he suffered a heart attack as well as, quote, “bruising to his chest, stomach, hips, knees, back, lips, head and eyelids; five broken ribs; and a damaged spine.” Despite these findings, the Department of Justice announced on Friday there was insufficient evidence to pursue federal criminal civil rights or other federal charges against the agents.

The killing of Anastasio Hernández Rojas had spurred calls for border agents to begin wearing body cameras, but the Los Angeles Times reports a new internal review by U.S. Customs and Border Protection officials found that staff should not be required to wear body cameras in the field.

Joining us from San Diego is Andrea Guerrero, the co-chair of Southern Border Communities Coalition and executive director of Alliance San Diego.

Can you tell us first, before we go to this decision, one of the largest police bodies in the country, the Border Patrol, not to wear a body cam—let’s talk about this case, let’s talk about Anastasio’s case. What happened on that day? And talk about the exoneration of the men involved with his death.

ANDREA GUERRERO: Yes, thank you. This is a devastating decision for the family of Anastasio. As you mentioned, he had been a longtime resident of San Diego. He was picked up off the streets of San Diego because he was undocumented. He did attempt to return to his family, his children. He has five children here in the United States. He was apprehended, and he was hurt by agents in the apprehension. He sought medical assistance, but instead of providing that, the agents attempted to deport him forcibly without providing the assistance.

It was then that the altercation occurred that was witnessed by passersby at the San Ysidro port of entry. He was electrocuted. He was beaten with a baton. And he was put face-down on the ground, hogtied, handcuffed with his pants taken off of him, with an agent on top of him, which led him to asphyxiate, lose consciousness, end up in the hospital. Shortly thereafter, he died.

AMY GOODMAN: And talk about the significance of the video that was released. And then, what were the grounds that the Justice Department announced the clearing of the officers who killed him?

ANDREA GUERRERO: Fortunately, there was an eyewitness video. There were actually two eyewitness videos, and the first video came forward immediately. The second video came forward two years after the incident. And when it did, it broke a national story about CBP brutality and impunity. Until the second video emerged, CBP had asserted that there were only a few agents involved and that Anastasio had been combative and that the use of force exercised against him was justified. The second video calls all of that into question. There were a dozen agents involved in the incident. And the agents who were there, immediately following the incident, went up on the bridge where the passersby were witnessing what was going on. They took the cellphones of the passersby. They erased the videos—all but one video. One eyewitness saw what was coming, saw the agents coming, and she pocketed the video. She held onto it for two years. She was scared to release it, because she had seen the murder of a man. And she finally did have the courage to come forward. We are very grateful for that. And when she did, it broke a national story. It broke the credibility shield of CBP, who has long enjoyed virtual impunity in this country.

AMY GOODMAN: That’s Customs and Border Protection. I want to turn to Anastasio Hernández Rojas’s widow, María Puga, who spoke after the Justice Department’s decision not to file charges against the agents.

MARÍA PUGA: [translated] My name is Maria Puga. Today, I received very bad news about the case involving my husband, Anastasio Hernández, who was killed by the Border Patrol. The prosecutor told me that there wasn’t enough evidence to charge the agents who were involved in the killing of my husband. He said the videos weren’t sufficient proof. I believe that if the agents would have been equipped with body-worn cameras, we would have enough evidence, or perhaps this would never have happened, my husband would still be alive. I ask President Obama to equip the agents with body-worn cameras, so that these incidents—or killings—do not continue to happen. I also ask that he conduct an administrative investigation to punish the agents who were involved in Anastasio Hernández’s case. We ask the community to support this petition, and thank you for your support, for always being with us.

AMY GOODMAN: That is Anastasio Hernández Rojas’s widow, María Puga, speaking after the Justice Department’s decision not to file charges against the agents who killed her husband. And you can go to democracynow.org to see our interview with María Puga. But I wanted to ask you, Andrea Guerrero, about the decision that’s coming just about the same time after a year investigation of the Customs Border Patrol not to put body video cams on their agents across the border of the United States.

ANDREA GUERRERO: It is an outrageous decision. This is an agency in crisis. You know, in this country, we have a policing crisis. And CBP is at the front of that crisis. It’s the largest law enforcement agency in the country. And as President Obama is calling upon local and state police to adopt 21st century reforms, which include body-worn cameras, we urge him to consider leading by example with his own police force, Customs and Border Protection, and directing them to adopt cameras.

Cameras would have saved the life of Anastasio and may have saved the life of—lives of many others. You know, the reason why the Department of Justice was not able to bring charges is because they couldn’t ascertain whether he had been combative prior to the eyewitness video or not. That is right now just the word of the agents against Anastasio, who is dead. If the agents had had cameras, we would know whether his actions justified what we saw. But right now, we don’t know. All we see is a lot of brutality—in an eyewitness video—that led to the death of Anastasio.

AMY GOODMAN: Let me ask you, Andrea—among the reasons that Customs and Border Patrol have given for saying no to these body cams are they may hurt employee morale and may be unsuited to the hot, dusty conditions in which Border Patrol agents often work. Your response?

ANDREA GUERRERO: Police in nearly every county in the southern border, from the Pacific Ocean to the Gulf of Mexico, are using body-worn cameras in the same conditions, the same hot, dusty climate. They’re facing the same challenges. And there is no reason why Customs and Border Protection cannot address those same challenges, adopt the best practices. They have lots of local police examples to turn to. There’s absolutely no reason why they can’t adopt these cameras.

AMY GOODMAN: Andrea Guerrero, I want to thank you for being with us—we’ll continue to follow this story—co-chair of Southern Border Communities Coalition, executive director of Alliance San Diego.

And that does it for our broadcast. Democracy Now! is hiring a development director to lead our fundraising efforts, as well as an on-air graphics operator. And we’re also accepting applications for our internship program. For all of these jobs, find out more at democracynow.org. 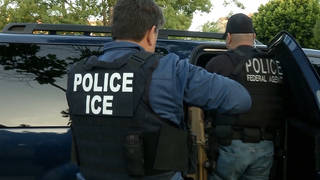