At End of Hottest Year Ever, Massive U.S. Storm Kills At Least 43 with More Extreme Weather to Come

At least 43 people died over the Christmas holiday weekend in a series of storms that hit the South, Southwest and Midwest United States. Tornadoes were reported in 10 states, including Michigan, which recorded its first-ever tornado in December. The deadliest storms were in Texas, where at least 11 people died when tornadoes hit areas near Dallas. As many as 1,000 homes were damaged. Now a major snowstorm is heading toward the region. Flash floods also killed at least 13 people in Missouri, Illinois and Arkansas, where as much as nine inches of rain fell on some areas. Meanwhile, heat records were broken on Christmas Day across the East Coast from Maine to Georgia. This weekend of extreme weather comes as climatologists predict 2015 will be the warmest year ever recorded, smashing last year’s record. We are joined by leading climate scientist James Elsner, professor at Florida State University and co-author of “The Increasing Efficiency of Tornado Days in the United States,” a paper recently published in the journal Climate Dynamics.

AMY GOODMAN: At least 43 people died over the Christmas holiday weekend in a series of storms that hit the South, Southwest and Midwest United States. Missouri and New Mexico declared states of emergency. Tornadoes were reported in 10 states, including Michigan, which recorded its first-ever tornado in December. The deadliest storms were in Texas, where at least 11 people died when tornadoes hit areas near Dallas. As many as a thousand homes were damaged. Now a major snowstorm is heading toward the region. The storm has already resulted in blizzard-like conditions in New Mexico, Oklahoma and western Texas. The snowstorm even disrupted the college football Sun Bowl being played in El Paso on the Mexico border. Another 10 people died in tornadoes in Mississippi, six more in Tennessee. Flash floods also killed at least 13 people in Missouri, Illinois and Arkansas, where as much as nine inches of rain fell on some areas.

Meanwhile, heat records were broken Christmas Day across the East Coast from Maine to Georgia. On Christmas Eve, the thermometer topped a record-breaking 70 degrees Fahrenheit in New York, Philadelphia and Washington, D.C. This weekend of extreme weather comes as climatologists predict 2015 will be the warmest year ever recorded, smashing last year’s record. So far in 2015, nine out of the 11 months have set a new monthly temperature record. Meanwhile, in South America, as many as 160,000 people have been evacuated due to heavy storms in Paraguay, Uruguay, Argentina and Brazil.

We go now to Tallahassee, Florida, to James Elsner, professor at Florida State University, co-author of the paper, “The Increasing Efficiency of Tornado Days in the United States,” recently published by the journal Climate Dynamics.

Professor, welcome to Democracy Now! Can you start off by talking about the weather we’ve seen, especially the tornadoes? Is there a link to climate change?

JAMES ELSNER: Well, first of all, Amy, it’s really important to note that the link between climate change and tornadoes is still in its infancy. Nothing is conclusive. What we do see, though, is that tornadoes seem to be coming in bigger bunches. So, in the past, we might see a day with five or six tornadoes; now we’re seeing days with 10 to 15 tornadoes.

AMY GOODMAN: And so, talk about those links, the links to, well, both the numbers and also the intensity.

JAMES ELSNER: Yes, so there are actually two things that we see. Not only are we seeing tornadoes come in bigger bunches, we’re also seeing them last longer. Once they hit the ground, they seem to be lasting longer. They’re staying on the ground longer. They’re doing more damage because of that. And they’re often reaching stronger intensities because of that. And the link here, we believe, although it’s not conclusive, is due to the amount of water in the air. So as the temperatures go up, as we get more heat in the atmosphere, we have more water also in the atmosphere. This is what makes you feel uncomfortable on a hot, sunny day, is this water in the air, water vapor or humidity. And we’re seeing the humidity go up as the temperatures go up. And this humidity is the fuel to keep these tornadoes going and getting stronger.

AMY GOODMAN: The number of deaths just over the weekend: 43 deaths. Can you also talk about the flooding that we’re seeing?

JAMES ELSNER: Yes, well, again, with the extra water in the atmosphere, the rains seem to come in greater downpours. So as the storm system organizes and the rain starts to fall, it comes down heavier and harder, creating flooding situations.

AMY GOODMAN: You know, there is a lot of coverage of weather in the United States, but rarely are the two words “extreme weather” connected to another two words—”climate change” or “global warming.” Can you talk about whether you feel this would be critical in dealing with this issue?

AMY GOODMAN: And in the last few days, InsideClimate News, the Pulitzer Prize-winning news organization, came out with a report that said not only ExxonMobil, a story they exposed weeks ago, but they suggest that nearly every major U.S. and multinational oil, gas company was aware of fossil fuels’ impact on climate change as early as the late 1970s. The earlier exposés by InsideClimate News and the Los Angeles Times revealed Exxon scientists knew about climate change as early as 1977, and for decades Exxon concealed its own findings that the burning of fossil fuels caused global warming, altered the climate and melts the Arctic ice. Can you talk about your response to this latest revelation that the entire oil and gas industry knew this?

JAMES ELSNER: Well, that’s really not my area of expertise. I do—that seems consistent with what the scientists knew at the time. Especially by the mid-1980s, the scientists were pretty much in agreement that greenhouse gases were warming the planet. And to have these companies not respond to that—and in fact hide the evidence—is, in my opinion, not surprising.

AMY GOODMAN: Finally, you have made a report card of the presidential candidates’ record on climate change, their statements. Can you talk about where they stand, Republican and Democrat?

JAMES ELSNER: Well, it appears that the Republicans don’t get a very high grade. This was done over a series of weeks when they were debating and tweeting their comments about climate change. And a number of the climate scientists got together and graded these candidates. And by and large, the Republicans got poor grades. The Democrats did a little better, but not—Bernie Sanders probably did the best, but again, there were a lot of variations in those responses.

AMY GOODMAN: Former Governor Jeb Bush scored the highest, the former governor of your state, of Florida, among the Republicans, 64. He was the only Republican candidate who got a passing grade on climate in the exercise. Below Clinton’s 94—that’s Hillary Clinton, of course—were Governor O’Malley with 91; Sanders with 87; Christie with 54; Ohio Governor John Kasich, 47; Kentucky Senator Rand Paul, 38; Carly Fiorina, 28; your senator, Florida Senator Marco Rubio, 21; Donald Trump, 15; and retired neurosurgeon Ben Carson, 13; finally, Ted Cruz with six. I wanted to look at this issue of the GOP debate on climate change. This is Ohio Governor John Kasich, who held the distinction of being the only candidate to even say the word “climate”—but it wasn’t to address it—in the last debate.

GOV. JOHN KASICH: First and foremost, we need to go and destroy ISIS, and we need to do this with our Arab friends and our friends in Europe. And when I see they have a climate conference over in Paris, they should have been talking about destroying ISIS, because they are involved in virtually every country, you know, across this world.

JAMES ELSNER: Well, clearly, there are lots of problems in the world, but climate change is an important problem that needs to be addressed now because of the consequences. And I think as the science becomes clearer and clearer, the extreme events that we’ve seen, not only in this country, but around the world, indicate that this is a serious problem going forward.

AMY GOODMAN: I want to thank you for being with us. Professor James Elsner teaches at Florida State University, co-author of the paper, “The Increasing Efficiency of Tornado Days in the United States.” We’ll link to it at the journal Climate Dynamics. And you can go to democracynow.org to see our two weeks of comprehensive coverage of the U.N. climate summit that took place in Paris.

This is Democracy Now! When we come back, we’re headed to Chicago. Police killed another two African Americans—a 19-year-old college student and a 55-year-old mother. The demands for Mayor Emanuel’s resignation are increasing. He’s on vacation in Cuba. Stay with us. 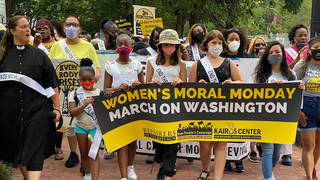