After the grand jury’s decision not to indict, Tamir Rice’s mother Samaria Rice accused the prosecutor of “deliberately sabotag[ing] the case, never advocating for my son, and acting instead like the police officers’ defense attorney.” Attorneys for the Rice family have asked the Justice Department to intervene over what they call “extreme bias” and “a charade process aimed at exonerating the officers.” Questions have also been raised about the officers’ past. In a previous stint at a different Ohio police department, Timothy Loehmann, who fatally shot Tamir, had been declared unfit for duty and “dismal” with his handgun. His fellow responding officer, Frank Garmback, also has a troubled history, with Cleveland paying $100,000 to a city resident who accused him of excessive force. We discuss the officers’ past and the prosecutors’ conduct with Rice family attorney Billy Joe Mills.

StoryApr 26, 2016Not Justice & Not Enough: Tamir Rice Family Gets $6M Settlement for Police Killing of 12-Year-Old

AMY GOODMAN: I wanted to ask about the earlier reports that emerged that the officer responsible for Tamir Rice’s death, Timothy Loehmann, was deemed unfit for police service over two years ago when he worked in the suburb of Independence. A letter from a superior specifically criticizes Loehmann’s performance in firearms training, saying, quote, “He could not follow simple directions, could not communicate clear thoughts nor recollections, and his handgun performance was dismal.” Meanwhile, Officer Frank Garmback, the officer who was driving the police cruiser, also has, to say the least, a troubled history. Cleveland reportedly paid out $100,000 to a Cleveland resident named Tamela Eaton to settle an excessive force lawsuit brought against Garmback. The settlement stemmed from a 2010 confrontation in which Eaton said Garmback, quote, “rushed her, placed her in a chokehold, tackled her to the ground, twisted her wrist and began hitting her body.” Billy Joe Mills, does this have any bearing on Tamir Rice’s case? I mean, start with Loehmann, the man who shot Tamir Rice. He’s forced out of a department because he had low impulse control and because his handling of handguns was appalling.

BILLY JOE MILLS: That’s right. He was forced out of a department that also was a suburban police department, a police department in which you would not expect there to be as many tense, high—you know, high-impulse situations as the city of Cleveland. And yet, the city of Cleveland completely neglected to even look into his employment record, and they have now gone back and looked at the hiring process and disciplined, I believe it was, the two hiring officers that were responsible for bringing Officer Loehmann on board. And so, that’s Officer Loehmann, completely unfit to even handle a weapon, completely unfit to be in that situation to begin with. Then, Officer Garmback, who was the driver of that vehicle, he was training Officer Loehmann at that time. Let’s not forget, Officer Garmback, the driver, created the danger by driving right up to Tamir. He’s the one that had more experience. He drove right up to Tamir and created the danger that they then saw fit to shoot their way out of.

AMY GOODMAN: And the issue of this unusual grand jury process, Billy Joe Mills, can you explain why it’s unusual?

BILLY JOE MILLS: Yes. If you’ve got another hour to give me, Amy, I can go over everything with you, but I’ll give you the highlights. First of all, the officers have criminal defense attorneys. They ignored their attorney’s advice to remain silent in the grand jury process. So what they did is they wrote prepared statements. They took the oath in front of the grand jury and then read those statements to the grand jury. What’s extremely unusual here is that, any other situation, if these were not police officers, the prosecutor would be salivating at the opportunity to then cross-examine the people who waived their Fifth Amendment right, because that’s what they did there. They waived their Fifth Amendment right to remain silent. So, that’s one big thing.

Second big thing, Prosecutor McGinty hired three experts, all of whom concluded that this was a justified shooting. Those experts would be normally selected by the defense attorneys, the attorneys representing the police officers. There is not any randomness. When an attorney hires an expert, there is no randomness in it. Any attorney in this country that is worth, you know, a pint of beer an hour knows exactly what their experts are going to say before they are hired.

AMY GOODMAN: And the story of the municipal judge who recommended Officer Loehmann be charged with murder, manslaughter and reckless homicide last year, can you explain what his standing was?

BILLY JOE MILLS: Sure. Well, he found probable cause for—to say that the officers committed a crime, which, again, that’s what the grand jury was looking at: Was there probable cause to say that a crime was committed here? It’s a pretty low standard to meet. And the video, in itself—and this is what Judge Adrine—he’s the judge you’re referring to—Judge Adrine essentially said the video itself is sufficient evidence to say there is probable cause that a crime has been committed here. What he—what he unfortunately chose not to do was take the next step, which was to say, “I find there’s probable cause, and I am also going to issue arrest warrants for these officers.” So, unfortunately, he did not take that step.

AMY GOODMAN: And the experts that you describe, that the prosecutor called, who were they? And if you were the prosecutor in this case, how would you see there being a different outcome? He said if you look carefully at the video—and they slowed it up, and they enhanced it—that, you know, that Tamir was showing—was pointing the gun at them, though he did say maybe it was because he wanted to give it to them?

BILLY JOE MILLS: Right. So that portion is very strange, and perhaps, to me, the strangest part of his press conference, the prosecutor’s press conference, yesterday, because, again, none of his experts, in their reports, said with any definitive certainty that Tamir was pulling the gun or trying to, you know, threaten the officers with it—they said that, essentially, that it was uncertain—but then took the next step to say, well, in that moment, in that one to two seconds of time—and our—one of the experts we hired said that it’s really just one second of time—in that one second of time, the officers were reasonable in feeling threatened by Tamir.

And so, the big—from a legal perspective, the big argument in this case is: What is the zoom? What is the focus level that you look at this situation from? Do you look at the total circumstances and realize and appreciate that the officers fabricated and created a danger that did not exist at all, a perceived danger? Or do you just zoom way in and look at the one to two seconds in which Officer Loehmann is within four-and-a-half to nine feet of Tamir Rice and say that he is justified in that moment? So that is the big—that is the big legal dispute here. And there is Sixth Circuit law, Kirby v. Duva, that says you can consider the police officers’ tactics, you can consider the totality of facts, when analyzing whether an officer is reasonable.

AMY GOODMAN: So, there is a lawsuit now that they family has. Where does that go, Billy Joe Mills?

AMY GOODMAN: And have you been speaking to the Department of Justice? Will there be a civil rights investigation?

BILLY JOE MILLS: We put together an extensive letter to the Department of Justice. It attached all of our complaints, showing all of the irregularities and unprecedented behavior of the prosecutor. And they are currently reviewing our request. But we don’t have any further information at this time, unfortunately.

AMY GOODMAN: Could another grand jury be convened?

BILLY JOE MILLS: Yes, not under Prosecutor McGinty, but, yes, that is possible.

AMY GOODMAN: And who would be the prosecutor in that case? And is there precedent for this?

BILLY JOE MILLS: Well, again, this entire thing has been incredibly unusual and unprecedented, to have a prosecutor acting as defense attorney and doing everything that he’s done, insulting the family, talking about the family having financial incentives for seeking criminal accountability. You know, there are—it could come from a future prosecutor. It could come from a special prosecutor being appointed, there being some kind of intervention, perhaps intervention from, you know, the state’s attorney general, Mike DeWine. You know, there are a couple of possibilities. We’re not—we don’t think there’s particularly high hope for any of those possibilities at this time, but we’re definitely going to be exploring every single possible avenue that is available.

When Will the Killings Stop? Calls for Justice as Tamir Rice Joins List of Unpunished Police Deaths 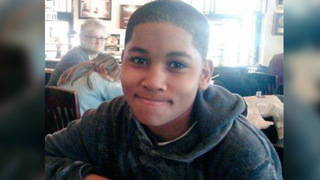 Not Justice & Not Enough: Tamir Rice Family Gets $6M Settlement for Police Killing of 12-Year-Old