Blockupy: Thousands Protest in Frankfurt Calling on Eurozone to Dismantle “Laboratory for Austerity”

Dozens of people have been wounded in clashes surrounding Wednesday’s massive protest against austerity in Frankfurt, Germany. A crowd of around 10,000 people marched outside the new headquarters of the European Central Bank to oppose economic policies that force deep cuts to public spending and worsen unemployment. Around 14 officers and 21 protesters were injured after breakaway marchers clashed with police. We speak with German climate justice activist Tadzio Mueller, who took part in the Blockupy protest.

AMY GOODMAN: We begin in Germany, where dozens of people have been wounded in clashes surrounding Wednesday’s massive protest against austerity in Frankfurt. A crowd of around 10,000 people marched outside the new headquarters of the European Central Bank to oppose economic policies that force deep cuts to public spending and worsen unemployment. Around 14 officers and 21 protesters were injured after breakaway marchers clashed with police.

The German climate justice activist Tadzio Mueller joins us now on the phone from Frankfurt. He took part in the Blockupy protest yesterday.

Tadzio, thanks so much for joining us. Can you talk about what is happening there in Frankfurt?

TADZIO MUELLER: Well, thank you very much for having me on the show. The first thing to say is that there were two things that happened yesterday. There were blockades of the opening of the new ECB tower block. Basically, the ECB, which used to be in Frankfurt for a long time, has built itself a new tower there, and they were going to open it with a lot of fanfare. And then the Blockupy coalition, which is a coalition of various left-wing and social justice groups, said, “We are going to blockade your opening, because there’s nothing to celebrate.” Like they had a big party planned with lots of heads of state. And Blockupy said, “You know there’s nothing to celebrate, given that the policies that you, the European Central Bank, are driving are leading to immiseration and impoverishment, especially in the European periphery, but all throughout the eurozone.” So, we announced these blockades. And in response, actually, the ECB kind of scaled back their party plans and just sort of invited a few people to come. So that was, in fact, a bit of a success, even of the announcement of our blockades.

So that’s what happened in the morning, and that’s where you saw the major clashes, that also produced the images you probably saw on TV. And then, in the afternoon, there was a rally and a major march. And if there were maybe 5,000 or 6,000 at the blockades in the morning, the rally and the march gathered up to about 30,000 people. So those were kind of two sort of separate events. And the mood at the first event, the blockades, was definitely very confrontational. But the mood in the afternoon was very different. It was very colorful. It was sunny. Folks were there from all over the continent. There was a real sense of a Europeanization of the struggle from below against the austerity diktats from above.

AMY GOODMAN: Can you—

AMY GOODMAN: Can you explain why the protest of the European Central Bank? Explain what are the concerns of those who are occupying, the protesters, the Blockupy group.

TADZIO MUELLER: Right. So, you have to imagine Europe or the eurozone right now as a huge laboratory for austerity policies, which is the word we use in Europe to describe what maybe folks in other countries have called neoliberalism or what for countries in the Global South used to be called policies of structural adjustment. The eurozone is being used by European elites to push back labor rights, all sorts of accomplishments of social movements of the last decades or even century. Everything is on the table in the euro crisis, whether it’s pensioners’ rights, workers’ rights, student rights, the right not to be evicted from your housing, healthcare. Everything is on the table for a sort of neoliberal offensive from the top.

And there, in that, the European—the countries of the European periphery in the south are suffering the most—Spain, Italy, Portugal and especially Greece. Greece has essentially, since the euro crisis hit or started, gone into what you might think of as receivership. They are no longer capable of drafting their own economic, social, etc., policies, but those policies are drafted by three institutions, which were—which used to be referred to as the troika. That is, A, the IMF, which we know from structural adjustment programs and others; the European Central Bank; and thirdly, the European Commission. Now, the ECB, the European Central Bank, is a key node in this troika, and the troika is the institution which has essentially evacuated Greek democracy.

When the Greeks voted for a different government, Syriza, anti-austerity government, a few months ago, it became very clear that European elites had a fight on their hand, whereas for many years it seemed that they were able to push these austerity projects from the top without much coordinated resistance or without resistance that managed to occupy certain levers of power. When, on the 25th of January, the Greek people voted for an anti-austerity government for the first time, which at this point enjoys 70 to 80 percent support in the Greek population, despite being in a very difficult situation—when this new government, this new hope, came to power in Greece, European elites realized now they had a real fight on their hands. And they’ve been trying to strangle this new hope in Greece ever since.

And this is why the protests at the European Central Bank yesterday were so tense and also filled with rage, because, on the one hand, you had this supposedly grandiose opening of a new institution that says, “Hey, we’re, you know, the sort of pinnacle of European integration and of European capitalism,” and at the same time, you’ve got this massive assault on social movements, on workers, in the entire European—in the entire eurozone, and especially the European periphery, and there, foremost Greece. And that’s essentially the connection that drove folks yesterday in large numbers to come and protest and blockade the ECB in Frankfurt.

AMY GOODMAN: And so, in this last minute we have left, Tadzio, explain what happened, the people who were injured and also the cars that were set afire.

TADZIO MUELLER: OK. Now, there were these blockades, and it is true that folks from the blockades were clearly out to engage the police. And I think we can say that this actually—it’s understandable why there is this rage. If you look at Greece, you’ve got youth unemployment of 50 percent, you’ve got increase in suicides. It’s a terrible situation. And folks in Europe were trying to express their rage at the evacuation of democracy on the continent. However, expressing rage is not the same as having a political strategy to change the things that are actually causing the suffering that is causing your rage. So, actually, there was a lot of rage in the street in the morning, but in the afternoon and evening, that had been transformed into a sense of hope, into a sense that we can lead a European struggle from below against these institutions and maybe win. So my hope would be, let’s not just focus on the burning cars, because in fact what we need to focus on is the ECB and their policies, because they’re burning the continent.

AMY GOODMAN: Tadzio Mueller, I want to thank you for being with us from Frankfurt, German activist who took part in the Blockupy protest. This is Democracy Now! When we come back from break, we go to Tunis, Tunisia, where tourists and local Tunisians were killed as they went into the museum in the capital of Tunisia. Stay with us. 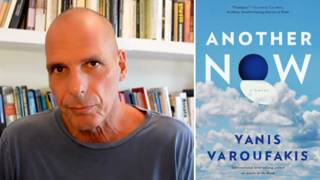