Chomsky on Snowden & Why NSA Surveillance Doesn’t Stop Terror While the U.S. Drone War Creates It

World-renowned political dissident, linguist and author Noam Chomsky discusses why National Security Agency whistleblower Edward Snowden should be welcomed back to the United States as a hero and why those who authorized the government surveillance he exposed should be on trial, not him. Chomsky also argues that while mass surveillance has been ineffective in stopping terrorism, programs like the global U.S. drone war have helped spread it to areas all around the world.

AMY GOODMAN: We’re spending the hour with MIT professor, author and activist Noam Chomsky. We sat down with him Monday. I asked him about the significance of the leaks by National Security Agency whistleblower Edward Snowden and whether he should be allowed to return to the United States without facing any charges.

AMY GOODMAN: I was talking to a friend who was saying, you know, when you talk about Edward Snowden, what about the issues of terrorism and having to spy on those who might want to hurt others?

NOAM CHOMSKY: If they want to—first of all, it’s—we can raise this question, but it’s academic, because they are not preventing terrorism. You’ll recall, when the Snowden revelations came out, the immediate reaction from the government, the highest level—Keith Alexander, others—was that these NSA programs had stopped, I think they said, 54 or so acts of terror. Gradually, when the press started asking questions, it was whittled down to about 12. Finally, it came down to one. And that act of terror was a man who had sent, I think, $8,500 to Somalia. That’s the yield of this massive program.

And it is not intended to stop terrorism. It’s intended to control the population. That’s quite different. You have to be very cautious in accepting claims by power systems. They have no reason to tell you the truth. And you have to look and ask, “Well, what is the truth?” And this system is not a system for protecting terrorism.

Actually, you can say the same about the drone assassination program. That’s a global assassination program, far and away the worst act of terror in the world. It’s also a terror-generating program. And they know it, from high places. You can find quotation after quotation where they know it. Take this one case that I mentioned before, this child who was murdered in a drone strike after having watched his family burn to death by drone strikes.

NOAM CHOMSKY: What’s the effect of this on people? Well, it’s to create terror. The close analyses have shown that that’s exactly what happens. There’s a very important book by Akbar Ahmed, who’s an important anthropologist, who is a Pakistani, who studies tribal systems and worked in the North-West territories and so on, and it’s called The Thistle and the Drone. And he goes through, in some detail, the effect on tribal societies of simply murdering—from their point of view, just murdering people at random. The drone attacks, remember, are aimed at people who are suspected of maybe someday wanting to harm us. I mean, suppose, say, that Iran was killing people in the United States and Israel who they thought would—might someday want to harm them. They could find plenty of people. Would we consider that legitimate? It’s again, we have the right to carry out mass murder of suspects who we think might harm us someday. How does the world look at this? How do the people look at this in this village where this child was who said that they’re terrorized by constant drone strikes all over North-West Pakistan? That’s true. Now it’s over most of the world. The U.S. war—so-called war against terror has been a smashing success. There was a small group up in the tribal areas of mostly Pakistan and Afghanistan, al-Qaeda, and we have succeeded in spreading it over the whole world. Now they’re all everywhere—you know, West Africa, Southeast Asia—simply generating more and more terror. And I think it’s—you know, it’s not that the U.S. is trying to generate terror. It’s simply that it doesn’t care. 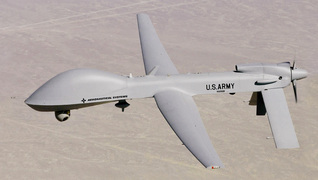