Noam Chomsky: As Venezuela Struggles to Fix Economy, U.S. Should Stop Trying to Undermine Its Gov’t

Tensions are growing between the United States and Venezuela as the government of President Nicolás Maduro grapples with an economic crisis and a right-wing opposition calling for his removal from office. Venezuela has announced the arrest of an unspecified number of Americans on charges of espionage, new restrictions on the number of U.S. diplomats allowed in Venezuela, and rule changes that will subject Americans to the same visa requirements Venezuelans face in the United States. Maduro has also unveiled a list of American politicians barred from entering Venezuela in response to U.S. sanctions against Venezuelan officials last year. Maduro has repeatedly accused right-wing opponents of fomenting a coup with U.S. support. The White House has denied the charges, but said last week it is considering “tools” to “steer the Venezuelan government in the direction … they should be headed.” Weighing in on Venezuela, Noam Chomsky says the United States should be working with the Maduro government, not trying to undermine it.

AMY GOODMAN: Speaking of Latin America, overall, I wanted to turn to the latest that’s happening in Venezuela and with U.S.-Venezuelan relations. Venezuela has announced the arrest of an unspecified number of Americans on charges of espionage, at least some of whom have reportedly been released and left the country. Speaking at a rally, the Venezuelan president, Nicolás Maduro, said the suspects were trying to stoke anti-government political sentiment.

PRESIDENT NICOLÁS MADURO: [translated] We’ve detected activity, and we have captured some U.S. citizens in undercover activities, in hidden activities, espionage, trying to win over people in towns along the Venezuelan coast, trying to win over people in some neighborhoods. In Táchira, we captured a pilot of a U.S. plane of Latin origin with all sorts of documentation.

AMY GOODMAN: President Maduro also announced new restrictions on the number of U.S. diplomats allowed in Venezuela and rule changes that will subject Americans to the same visa requirements Venezuelans face in the United States. President Maduro has also unveiled a list of American politicians barred from entering Venezuela in response to U.S. sanctions against Venezuelan officials last year. Maduro has repeatedly accused right-wing opponents of fomenting a coup with U.S. support. Now, the White House has denied the charges, but said last week it’s considering tools to, quote, “steer the Venezuelan government in the direction they should be headed,” unquote. Professor Noam Chomsky, your response? What’s happening?

NOAM CHOMSKY: Well, one kind of question we should immediately ask ourselves is brought up by your observation that Venezuela is planning to impose on U.S. citizens the same restrictions that the United States imposes on Venezuelans. Why do we impose those restrictions? Suppose, say, that Iran was sending people to the United States to foment opposition to the government and call for change in the regime. How would we react to that? Unimaginable. But we consider it our right to do that elsewhere. Incidentally, this is not a justification of Venezuelan actions. The fact that we do it doesn’t make it justified. If others do it, no, it’s not justified. Venezuela has severe internal problems. There’s no doubt about that.

AMY GOODMAN: What is your assessment of Maduro and how he compares to President Chávez?

NOAM CHOMSKY: Well, Maduro—Chávez had a charisma and popular support and appeal that Maduro doesn’t have. But there is a—there are difficult economic circumstances to face within Venezuela. The economy is in difficult shape. During the Chávez years, there were progress in many areas, but there was no success in moving Venezuela away from a strictly oil-based economy. There was very little in the way of diversification of the economy, a development of agriculture, development of industry and so on. And that’s a pretty weak reed for an economy to rest on. It’s not a successful development program. And that’s now showing up. There were inflation problems. They were never able to deal with the problem of internal violence. It’s not the most violent country in the hemisphere, but it’s pretty bad. And these are serious internal problems that are undoubtedly being exacerbated, to some extent by U.S. involvement. By rights, we should be trying to support Venezuela to overcome its internal problems, not trying to light fires that will make them worse.

AMY GOODMAN: How could the U.S. do that?

NOAM CHOMSKY: We could, for example, eliminate those restrictions that you’re talking about. We could be providing economic and technical assistance that could be used to overcome internal difficulties. These are things that could be done. Instead what we’re doing is maintaining a position of extreme hostility. This is not—there’s plenty of problems internally, and our actions are purposely making them worse. It’s not by accident. We want—the U.S. government wants to make them worse, because it wants the regime overthrown. Chávez’s own estimate—whether it’s accurate or not, I can’t judge, but what he’s—his position is that the United States was willing to tolerate his government, up to the point when he began to play a significant role in OPEC and convinced the OPEC countries, the oil-producing countries, to lower production in order to raise prices. And the U.S. was strongly opposed to that. And what he says is, that’s when the U.S. government turned against him. In fact, the U.S. backed, openly backed, the 2002 coup, which briefly overthrew the government, and has continued subversive activities. That’s his judgment.

AMY GOODMAN: MIT professor Noam Chomsky. Coming up, he talks about Edward Snowden, drone warfare, the legacy of slavery in the United States and Noam’s new love. All that and more, coming up.

Chomsky on Snowden & Why NSA Surveillance Doesn’t Stop Terror While the U.S. Drone War Creates It

NEXTChomsky on Snowden & Why NSA Surveillance Doesn’t Stop Terror While the U.S. Drone War Creates It 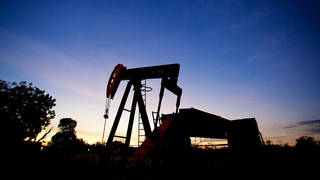