Amy Goodman interviewed civil rights luminaries at the foot of the Edmund Pettus Bridge, including 103-year-old Amelia Boynton Robinson, who held President Obama’s hand as they marched on the 50th anniversary of Bloody Sunday. Robinson played a key role in organizing the march and invited Dr. Martin Luther King Jr. to Selma in 1965. “If you are not a registered voter and you are 18 years of age, you are a hopeless people. Definitely hopeless, because you have nothing to say about your county, your city, your state,” Robinson says. Other women honored this weekend as original “foot soldiers” who marched in 1965 include then 13-year-old Mae Taylor Richmond. “As we knelt down to pray,” she recalls, “the state troopers threw tear gas besides us, and we proceeded to run back to the church.” We also speak with Rev. Jesse Jackson; Theresa Burroughs, who was 21 years old when she marched in Selma; comedian Dick Gregory; Clarence B. Jones, the attorney for Martin Luther King Jr.; and Susannah Heschel, daughter of Rabbi Abraham Joshua Heschel.

StoryMar 10, 2015Dying for the Right to Vote: Remembering the Selma Martyrs, From Jimmie Lee Jackson to Viola Liuzzo

AMY GOODMAN: We’re here. It’s Saturday of March 7th, 50 years of Bloody Sunday. And we’re at the foot of the Edmund Pettus Bridge. Many luminaries are walking by. Reverend Jackson, Amy over here from Democracy Now!

REV. JESSE JACKSON: Amy, there is—today there is no sense of the danger that was here 50 years ago, open season on anybody with out-of-state tags—activists, young black people, blacks and Jews in coalition. That’s why Schwerner, Goodman and Chaney were killed, targeted and killed, an act of terrorism. Viola Liuzzo, a white woman from Detroit, brains shot out, point-blank range, called “nigger lover.” That was killing, a bound and killing—Reverend James Reeb, Jimmie Lee Jackson.

And we celebrate it because, against those odds, we overcame. We won the protected right to vote, where you could not move boundaries and you could not gerrymander, annexation, at-large schemes. But the Supreme Court took that away two years ago, and there is not the drama attached to gutting the bill as there was achieving the bill. The Congress is here today with the president. They must go back to Washington, not as demonstrators, but as legislators, to restore the protected right to vote and to address the issue of poverty in a meaningful way.

Everybody will say, “Selma made me possible. Selma helped me.” Well, help Selma—40 percent unemployment among adults, 60 percent of that among young people, people living in trailers, living in huts without running water, without indoor toilets. This is a time Selma should be a model city for restoration of urban poverty—property, dealing with both legislation and poverty.

REV. JESSE JACKSON: She invited Dr. King to Selma. She was head of the Dallas Voters League. And along the highway is the letter she wrote to Dr. King. At Christmas time, she came to Atlanta, inviting Dr. King here. He came on the strength of her invitation.

AMY GOODMAN: Your thoughts about what happened 50 years ago today? You were in that first protest. You were beaten.

AMELIA BOYNTON ROBINSON: Well, it was something that I figured that I could not resist, because we were trying to get people to register and voted, long before Dr. King was born. And we were working to get them to know that. And I say today, if you’re not a registered voter and you’re 18 years of age, you are a hopeless people, definitely hopeless, because you have nothing to say about your county, your city, your state, your nothing. So don’t be hopeless. Be a human being, a city, a citizen of the city of Selma, of the state, of Selma.

AMY GOODMAN: What gave you the courage that day to face those state troopers?

AMY GOODMAN: Thank you so much.

Hi. Can I ask your name and where you were 50 years ago today?

THERESA BURROUGHS: My name is Theresa Burroughs, and I’m from Greensboro, Alabama. And 50 years ago today, I was on the Edmund Pettus Bridge.

AMY GOODMAN: Right where you are today.

THERESA BURROUGHS: Right where I am today.

AMY GOODMAN: And what happened? How old were you at the time?

THERESA BURROUGHS: I was 21.

AMY GOODMAN: You were facing off against state troopers?

THERESA BURROUGHS: Yes. Yes, we were beaten on that bridge.

AMY GOODMAN: What gave you the courage to do that?

AMY GOODMAN: Can you tell me your name? And tell me about the medal that you’re wearing.

MAE TAYLOR RICHMOND: Mae Richmond. This is a medal for foot soldiers who participated in the 1965 voting rights movement.

MAE TAYLOR RICHMOND: Thirteen. I was 13. Many of the youth were between the ages of about nine, eight or nine, to about 16.

AMY GOODMAN: Did you march that day?

MAE TAYLOR RICHMOND: I did. I participated in all three marches—the Bloody Sunday, the Turnaround Tuesday, the Selma to Montgomery March.

AMY GOODMAN: And Bloody Sunday, where were you in the march, and what happened to you?

MAE TAYLOR RICHMOND: —Hosea Williams told us to kneel down and pray, after they would not—the state troopers would not let us through. And as we knelt down to pray, the state troopers threw tear gas beside us, and we proceeded to run back to the church and to other areas, trying to get in security.

AMY GOODMAN: That was Mae Taylor Richmond, Theresa Burroughs and, before that, Amelia Boynton Robinson, who is now 103 years old—some of the civil rights foot soldiers who gathered in Selma this weekend for the 50th anniversary of Bloody Sunday. We’ll have more from Selma, Alabama, in a minute.

AMY GOODMAN: John Legend and Common performing “Glory” at the Oscars. They won best original song for the movie Selma. This is Democracy Now!, democracynow.org, The War and Peace Report. I’m Amy Goodman. We’re broadcasting from Montgomery. We have just returned from Selma, Alabama, where this weekend tens of thousands of people gathered to mark the 50th anniversary of Bloody Sunday.

AMY GOODMAN: Mr. Dick Gregory, how are you? Can you tell me your thoughts today?

DICK GREGORY: Fear is gone. Fear. And we won’t lose it all 'til the women get free. Fear. We were here 50 years ago, and we knew we could all die. We don't even expect a cop to slap you. But it ain’t the cop [inaudible]. It’s fear.

AMY GOODMAN: What’s your most vivid memory of marching with Dr. King and that final march from Selma to Montgomery?

DICK GREGORY: It’s over. That phrase of it: “It’s over.” We made it. And that’s the day I realized that the greatest fighters in the world are not soldiers. It’s turtles. And that’s what we’d become—hard on the outside, soft on the inside, and willing to stick your neck out. That’s all. Harvard don’t teach that. NBC don’t know nothing about that.

CLARENCE B. JONES: My name is Dr. Clarence B. Jones. I am here, along with so many others, to commemorate the 50th anniversary—different than, except for a small number of people, I was actually here 50 years ago. But eventually what happened was that we marched under federal—

CLARENCE B. JONES: —and state escort, yeah. We marched from Selma to Montgomery. And what is often obscured and forgotten is, when we got to Montgomery, the speech that Martin Luther King Jr. gave across the street from the state Capitol was one of the greatest speeches he ever gave. Somebody in the audience said to him, “Dr. King, how long?” And Dr. King turned to him and gave the most eloquent response, part of which he says, “The moral arc of the universe is long, but it bends towards justice.” And then he went on to say, “Not long.”

SUSANNAH HESCHEL: My name is Susannah Heschel. I’m a professor of religion at Dartmouth College. And my father marched with Dr. King 50 years ago. He was Rabbi Abraham Joshua Heschel.

AMY GOODMAN: And talk about what you know from his stories about that moment when they marched over the Edmund Pettus Bridge, March 23rd, 1965.

SUSANNAH HESCHEL: I grew up—my father was immersed in the civil rights movement, and it shaped my entire childhood. And it was the most inspiring experience for me. When my father left to come to Selma that night, it was after Shabbat. I remember vividly kissing him goodbye and wondering if he would ever come back, if I would ever see him again. So it’s very much ingrained in my memory. And then he came back, and he said that he felt it was a holy—a holy moment. He said it reminded him of marching with Hasidic rebbes being in Europe, being here. He told me that Martin Luther King said to him that this was the greatest day of his life. And my father said that he felt that it was worship, this march. He said, “I felt my legs were praying.” 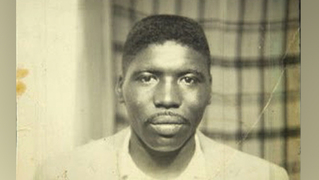 Dying for the Right to Vote: Remembering the Selma Martyrs, From Jimmie Lee Jackson to Viola Liuzzo