Fifty years ago, Dr. Martin Luther King Jr. was confronted by Alabama state troopers as he led a march across Edmund Pettus Bridge in Selma, Alabama. This weekend, his daughter Bernice King was escorted across the bridge by an African-American state trooper. “The contrast between then and now is phenomenal, but the reality is we are at a crossroads,” King says. She argues voting rights that were won in 1965 have since been gutted, and calls for a resurgence of activism to restore them. “Struggle is a never-ending process. Freedom is never really won,” King adds, quoting her mother, Coretta Scott King. “You have to earn it and win it in every generation.” King also describes her own work conducting nonviolence trainings in Ferguson, Missouri, when protests erupted after the police shooting of unarmed teenager Michael Brown.

BERNICE KING: My name is Bernice A. King. I’m the youngest child of Martin Luther King and Coretta Scott King. But, you know, we all know this is a very important day in the history of our nation. It’s the centerpiece of our democracy that these people sacrificed their life for, shed blood for. And in one sense, it’s a joyous day, because we’ve made so many tremendous strides. I was sharing, you know, this all got started when the state trooper shot Jimmie Lee Jackson. Well, it started really before that, but that’s what really sparked the whole Selma-to-Montgomery process. And today I had an opportunity—and being escorted by a state trooper, and was brought down here by an African-American state trooper. And so, the contrast between then and now is phenomenal. But the reality is we’re at a crossroads, because the Voting Rights Act has been gutted. And there’s so many people now that have been disenfranchised. And so, in the words of my mother, struggle is a never-ending process. Freedom is never really won; you have to earn it and win it in every generation. And there must be a resurgence of the fight for that struggle, to guarantee that those people, going forward, will have the same opportunity to have their voices heard and their vote registered.

AMY GOODMAN: And as you pointed out with Jimmie Lee Jackson, that this is also an issue today, looking back 50 years, of police brutality—

AMY GOODMAN: —what we’re seeing around the country—

AMY GOODMAN: —young people being killed by police officers, and the DOJ report that just came out.

BERNICE KING: Yes, it is. And we’re going to have to try to find a way to train these police officers. It’s going to take some time, because at the end of the day, no law is going to change a person’s perspective, their outlook, their behavior. And that’s why, through the King Center, we’re doing training in Nonviolence 365. We had an opportunity to do some in Ferguson when all of this happened. And there were police officers in the room with citizens in that community. And it was a little tough at the beginning, but we made it through. And it was a small seed, but that’s the work that I do, because this movement was fueled by nonviolent philosophy and methodology.

AMY GOODMAN: Your thoughts on the Black Lives Matter movement?

BERNICE KING: I think it’s important because it brings attention to that there’s still a community that’s wholeheartedly suffering. But more importantly, it’s lifted up the fact that we still, in this nation, have to understand that everybody’s humanity matters, regardless of who they are. And so, thank God that they have raised that kind of consciousness. And we look forward to us continuing to move forward to try to create this beloved community. God bless you. 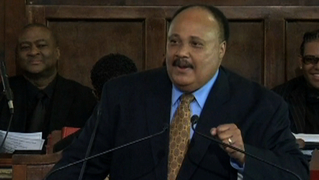