As the U.S. Department of Justice calls for a major overhaul of Ferguson’s criminal justice system after finding systemic discrimination against African-American residents, we speak with Michael Brown’s mother, Lesley McSpadden, who marched in Selma to mark the 50th anniversary of the protest for voting rights. “My son would have been able to vote had he still been alive for the election coming up,” McSpadden says of Brown, who was 18 years old when he was shot dead by Ferguson police officer Darren Wilson last August, spurring local and nationwide demonstrations. McSpadden responds to the DOJ’s new report that documents police harassment, abuse and racial profiling of African Americans in Ferguson, and the announcement that Wilson will not face civil rights charges. She calls for the resignations of the Ferguson’s police chief, the mayor and Missouri Gov. Jay Nixon. We also speak with professor Michael Eric Dyson about the Ferguson report and protests. “The president says this is an aberration. I’m not so sure. It is more representative than I think he or others are willing to admit. … This is representative of the tensions between police and people in many communities across this country.” In addition, we talk to Sherrilyn Ifill of the NAACP Legal Defense Fund; Barbara Lee, Democratic representative from California; and Raphael Warnock, pastor of Ebenezer Baptist Church.

AMY GOODMAN: Ms. McSpadden, I’m Amy Goodman from Democracy Now! We’ve been covering Ferguson for quite a while. We’re a public television and radio show. Your thoughts today?

AMY GOODMAN: This is not only about voting rights, it is also about police brutality. This march was prompted 50 years ago by the killing of Jimmie Lee Jackson by state troopers. Do you make parallels with your son’s death, Michael Brown’s death?

LESLEY McSPADDEN: It does. It does. It has certain similarities, and the outcome was pretty much the same. And my son would have been able to vote, had he still been alive, for this voting election coming up.

AMY GOODMAN: And your thoughts on Darren Wilson not facing any federal civil rights charges?

AMY GOODMAN: And your thoughts on the Justice Department finding a pattern of racism in the Ferguson Police Department and also the courts?

LESLEY McSPADDEN: Well, we knew that. I think the world pretty much saw that before they came out with those findings. So that’s why it’s so hard to believe that they didn’t find that other piece that everyone else saw.

AMY GOODMAN: And what do you think will happen now? Do you want there to be monitoring, federal monitoring, of Ferguson police?

LESLEY McSPADDEN: Being honest, I don’t think there should be a Ferguson Police Department anymore.

AMY GOODMAN: What should there be?

LESLEY McSPADDEN: The police department should be disbarred and maybe took over by a more—you know, a better set of people, maybe even just fire them all and just hire in some new cops. And with this new training that you’re giving to an old cop, just start fresh with a new batch, and they’ll get the proper training that you’re saying you failed to give the cops that are already working.

AMY GOODMAN: So, do you think Jackson should go, the police chief?

LESLEY McSPADDEN: Do you think Jackson should go?

AMY GOODMAN: Do you think Mayor Knowles should go?

LESLEY McSPADDEN: Do you think Mayor Knowles should go?

AMY GOODMAN: What about the governor, Governor Nixon?

LESLEY McSPADDEN: Oh, same question. What do you think?

SHERRILYN IFILL: My name is Sherrilyn Ifill. I’m the president and director-counsel of the NAACP Legal Defense Fund.

AMY GOODMAN: Let me ask a question. I just spoke to Lesley McSpadden, the mother of Michael Brown.

AMY GOODMAN: And I asked her about the DOJ report and what she thinks—

AMY GOODMAN: —and about the federal monitoring of the Ferguson Police Department of Ferguson and retraining. And she said they should all be fired. Why try to retrain the old? Why not bring in a whole new group? What do you think about that?

SHERRILYN IFILL: I think I’d go a step further. It’s not clear to me that the Ferguson Police Department shouldn’t be entirely disbanded. It’s not clear to me that this town of 21,000 people needs its own police department. There are 90 jurisdictions in St. Louis County. We need to begin to look at some regional policing issues, so that we can get some quality control. You cannot get your hands around all of those tiny jurisdictions. Ferguson is but one of the 90 jurisdictions in St. Louis County. So, honestly, if we want real change to happen there, we’re going to need to have a regional policing solution.

MICHAEL ERIC DYSON: Well, you know, it’s an incredible day. The bloody bridge that we traveled over to come where we are has made possible what Barack Obama is. The challenge to him is to lift up the elegant legacy of people who were trampled into the ground and to refuse to be silent about the issues that vex us. He has made a gesture toward that by finally recognizing, in Ferguson, what was going on there. The president says this is an aberration. I’m not so sure. It’s more representative than I think he or others are willing to admit. And so, as a result of that, he’s got to be pushed to think more critically about how systemic this is. This is not just an episode of angst, of anxiety, racially speaking, of one department. This is representative of the tensions between police people in many communities across this country and African-American and Latino citizens.

REP. BARBARA LEE: Well, it’s just—I’m here with a sense of gratitude and a sense of humility, and just thankful for those foot soldiers and the great leaders who led the movement so that I could be the 100th member of Congress. And I’m also thinking about the work that’s left to do. Got so much to do, when you look at Ferguson, New York, Oakland; when you look at systemic, institutional racism; when you look at what needs to be done. It’s the young people, once again, who are going to protest and who are going to make members of Congress do the right thing.

AMY GOODMAN: I saw you at Troy Davis’s funeral.

AMY GOODMAN: How does that story—

AMY GOODMAN: How does that—and what was your message there? And how does the issue of the death penalty, who gets put to death, who doesn’t, who’s imprisoned, who isn’t, fit into this story today, 50 years after Bloody Sunday and Selma?

REV. RAPHAEL WARNOCK: Well, one of the—one of the striking things is that if there is a sector of American society that is worse and more rabidly racist than it was during Dr. King’s lifetime, it is the criminal justice system. America warehouses 25 percent of the world’s prisoners, although we’re only 5 percent of the world’s population. The death penalty is a capstone of that larger problem of deep disparities in sentencing. Getting sentenced to death has very often to do with the race of the victim. And so, we have to continue to fight the good fight on this. Our beloved nation is almost alone in continuing to exercise this brutal and unusual and inhumane punishment. But I think there are hopeful signs. There were those of us who stood this week to argue in Georgia that a woman named Kelly Gissendaner should not be executed. And so far, that execution has been at least placed on hold. There was this issue apparently with the lethal injection being cloudy, which was interesting. And the reason we’re having this problem is we’re having a hard time getting the toxic compounds necessary to kill people in the name of the state. And that’s because most of the rest of the world understands that this kind of practice has no place in 21st century civilized society. It is state-sanctioned mob violence. 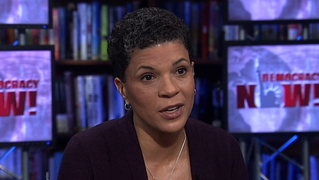