In 2006, two of the world’s most celebrated writers, Eduardo Galeano and Arundhati Roy, shared the stage of Town Hall in New York City for a historic evening of readings and dialogue. Eduardo Galeano is a Uruguayan author who died on April 13, 2015. His books include the trilogy “Memory of Fire” and “Open Veins of Latin America: Five Centuries of the Pillage of a Continent.” Arundhati Roy won the Booker Prize in 1997 for her novel, “The God of Small Things.” Her other books include, “An Ordinary Person’s Guide to Empire” and “Field Notes on Democracy: Listening to Grasshoppers.”

Both writers have appeared on Democracy Now! many times over the years. Visit our online archive to watch our interviews with Eduardo Galeano and Arundhati Roy. 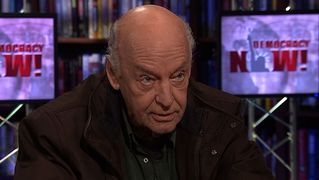