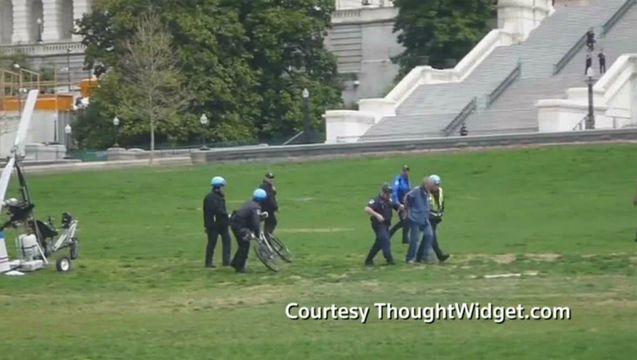 A mailman from Florida landed a tiny personal aircraft known as a gyrocopter on the lawn of the U.S. Capitol Wednesday in a protest to demand campaign finance reform. Doug Hughes was carrying letters to every member of Congress calling for them to address corruption. He flew about an hour from Maryland into restricted airspace and onto the Capitol’s West Lawn, stunning authorities and bystanders.

Related story from today’s show: Rep. Alan Grayson on Money & Politics: 'If We Do Nothing, We Can Kiss This Country Goodbye. Well, Pucker Up'

“The unending chase for money I believe threatens to steal our democracy itself. They know it. They know we know it. And yet, Nothing Happens!” — John Kerry, 2-13

In a July 2012 Gallup poll, 87% tagged corruption in the federal government as extremely important or very important, placing this issue just barely behind job creation. According to Gallup, public faith in Congress is at a 41-year record low, 7%. (June 2014) Kerry is correct. The popular perception outside the DC beltway is that the federal government is corrupt and the US Congress is the major problem. As a voter, I’m a member of the only political body with authority over Congress. I’m demanding reform and declaring a voter’s rebellion in a manner consistent with Jefferson’s description of rights in the Declaration of Independence. As a member of Congress, you have three options.

1. You may pretend corruption does not exist.

2. You may pretend to oppose corruption while you sabotage reform.

3. You may actively participate in real reform.

If you’re considering option 1, you may wonder if voters really know what the 'chase for money' is. Your dismal and declining popularity documented by Gallup suggests we know, but allow a few examples, by no means a complete list. That these practices are legal does not make them right! Obviously, it is Congress who writes the laws that make corruption legal.

1. Dozens of major and very profitable corporations pay nothing in taxes. Voters know how this is done. Corporations pay millions to lobbyists for special legislation. Many companies on the list of freeloaders are household names — GE, Boeing, Exxon Mobil, Verizon, Citigroup, Dow …

2. Almost half of the retiring members of Congress from 1998 to 2004 got jobs as lobbyists earning on average fourteen times their Congressional salary. (50% of the Senate, 42% of the House)

3. The new democratic freshmen to the US House in 2012 were 'advised' by the party to schedule 4 hours per day on the phones fund raising at party headquarters (because fund raising is illegal from gov’t offices.) It is the donors with deep pockets who get the calls, but seldom do the priorities of the rich donor help the average citizen.

4. The relevant (rich) donors who command the attention of Congress are only .05% of the public (5 people in a thousand) but these aristocrats of both parties are who Congress really works for. As a member of the US Congress, you should work only for The People.

2. Not your political party.

3. Not the richest donors to your campaign.

4. Not the lobbyist company who will hire you after your leave Congress.

There are several credible groups working to reform Congress. Their evaluations of the problem are remarkably in agreement though the leadership (and membership) may lean conservative or liberal. They see the corrupting effect of money — how the current rules empower special interests through lobbyists and PACs — robbing the average American of any representation on any issue where the connected have a stake. This is not democracy even if the ritual of elections is maintained.

The various mechanisms which funnel money to candidates and congress-persons are complex. It happens before they are elected, while they are in office and after they leave Congress. Fortunately, a solution to corruption is not complicated. All the proposals are built around either reform legislation or a Constitutional Amendment. Actually, we need both — a constitutional amendment and legislation.

There will be discussion about the structure and details of reform. As I see it, campaign finance reform is the cornerstone of building an honest Congress. Erect a wall of separation between our elected officials and big money. This you must do — or your replacement will do. A corporation is not 'people' and no individual should be allowed to spend hundreds of millions to 'influence' an election. That much money is a megaphone which drowns out the voices of 'We the People.' Next, a retired member of Congress has a lifelong obligation to avoid the appearance of impropriety. That almost half the retired members of Congress work as lobbyists and make millions of dollars per year smells like bribery, however legal. It must end. Pass real campaign finance reform and prohibit even the appearance of payola after retirement and you will be part of a Congress I can respect.

The states have the power to pass a Constitutional Amendment without Congress — and we will. You in Congress will likely embrace the change just to survive, because liberals and conservatives won’t settle for less than democracy. The leadership and organization to coordinate a voters revolution exist now! New groups will add their voices because the vast majority of Americans believe in the real democracy we once had, which Congress over time has eroded to the corrupt, dysfunctional plutocracy we have.

The question is where YOU individually stand. You have three options and you must choose.

StoryApr 22, 2015“It Was Worth Risking My Life, My Freedom”: Campaign Reform Activist on Flying Gyrocopter to Capitol 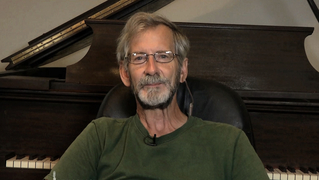 “It Was Worth Risking My Life, My Freedom”: Campaign Reform Activist on Flying Gyrocopter to Capitol