Last year on August 14, just days after Michael Brown was fatally shot in Ferguson, Michelle Cusseaux was killed at close range by a Phoenix police officer who had been called to take the 50-year-old woman to a mental health facility. The officer, Sgt. Percy Dupra, claims Cusseaux threatened him with a hammer. Her family joined supporters the week after her death in marching her casket from Phoenix City Hall to the U.S. Attorney’s Office to call for an outside investigation. Phoenix police say they are now creating a crisis intervention squad to respond to calls involving the mentally ill. We are joined by Michelle Cusseaux’s mother, Frances Garrett.

AMY GOODMAN: Well, last year on August 14th, just days was fatally shot, August 9th, in Ferguson, Missouri, Michelle Cusseaux was killed at close range by a Phoenix police officer, who had been called to take her—she was 50 years old—to a mental health facility. Sergeant Percy Dupra claimed she threatened him with a hammer. Her family joined supporters the week after her death in marching her casket from Phoenix City Hall to the U.S. Attorney’s Office to call for an outside investigation.

JUAN GONZÁLEZ: Phoenix police say they are now creating a crisis intervention squad to respond to calls involving the mentally ill. In a minute we’ll be joined by Michelle Cusseaux’s mother, Frances Garrett.

AMY GOODMAN: And as we talk about this, just to be clear—and Fran Garrett is with us now—your daughter was killed just after Michael Brown was killed.

AMY GOODMAN: So, talk about what happened to your daughter.

FRANCES GARRETT: Well, from what I understand—I was in California at the time. And Michelle—I had spoke with Michelle’s case worker earlier that morning, and Michelle allegedly had called, phoned down to the mental health, behavioral health center, and had threatened them because of her treatment, and transportation had somehow not arrived. So she was somewhat upset. I had spoke with her case manager that morning. I thought everything had been resolved. I spoke with Michelle. No one at that time had ever said that they were sending out an order to pick Michelle up.

Later on that morning, I—well, let me rewind this. I was in California for a suitability hearing. I had lost a son to a drive-by years prior to this, and that’s what had set Michelle on a down—a spiral downhill with her mental health issues. And so, I had spoke with Michelle that morning and had let her know that we—I had forgiven the young man and to accept his apology. Michelle said she also had forgiven him for taking her brother’s life. And she also forgave him and accepted his apology. That was one hour—one moment, hour later, Michelle was killed by the Phoenix Police Department.

My daughter, she was a very caring person. Sure enough that she had mental health issues. She also went back to school and became a peer, to help others such as herself.

From what I understand, after pickup orders had been given for the police to go out and pick Michelle up, to bring her in, to get her back on medication, the officers who first arrived had things under control. And at some point, Michelle was inside, said—her door was open when they appeared. Her front door was open with the screen locked, and Michelle had let them know that she was OK. I guess they were there doing a wellness check. Michelle said was OK, and “just go away.” At some point, the sergeant, 17-year sergeant, came on board and to—overstepped his boundaries. He pried open Michelle’s door. He allegedly said she came at him with a hammer. And he shot her at close range once in the heart. So Michelle was killed in her home.

At that time, I’m on the phone. The neighbor downstairs had phoned me. I asked to speak with the officers, and no one came to the phone. So I was on the phone when all of this occurred and to hear this commotion and all and with them removing my daughter from her home on a gurney, on a stretcher.

JUAN GONZÁLEZ: Yeah, I want to turn to comments made by Sergeant Percy Dupra, the Phoenix police officer who shot Michelle Cusseaux.

JUAN GONZÁLEZ: He described the moments before he shot and killed her.

SGT. PERCY DUPRA: Her eyes were wide open, mouth wide open. She never said a word, was like—she had that anger in her face that she was going to hit someone with that hammer. I became very concerned that she was going to hit me in the head with that hammer and either kill me and take my gun or at least—there, at least, knock me out and start hitting Officer Perches with it.

JUAN GONZÁLEZ: That was the sergeant that shot your daughter. Could you talk about—

JUAN GONZÁLEZ: —react to his statement?

FRANCES GARRETT: I really don’t know how—Michelle was five-foot-five, 130 pounds. So, at some point, if the officer felt threatened by someone of that stature, then he, I feel, should turn in his badge. It was other officers there with guns drawn. I just didn’t see Michelle being a threat to them. There were other ways, at which, prior to his arrival, they had decided to go down and perhaps get mace. It was other ways to handle that.

JUAN GONZÁLEZ: But that’s what I wanted to ask you about. Many big city police departments have officers specifically trained to deal with emotionally disturbed persons.

JUAN GONZÁLEZ: Special units. Was this a special unit, or was this normal, regular Phoenix police officers?

AMY GOODMAN: And they knew they were taking her to a mental health facility.

FRANCES GARRETT: They knew. They knew, because of the orders, the orders to pick her up and take her in to a facility. We have found out what—my thing is for police not to be the first responder in situations such as this, or, if so, to have someone from the mental health, behavioral health agencies’ providers there on the scene. Since then, the Phoenix Police Department has gotten a—they’ve come together to make changes. At this point, when that particular—that incident with my daughter happened, they did not have a policy and procedure in place to—for officers to do pickups. Now they are training them and have come up with a special force to go out into the community to handle situations such as this. 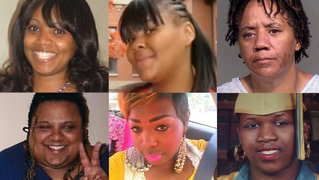