As the Black Lives Matter movement grows across the country, the names of Michael Brown, Eric Garner, Tamir Rice and Freddie Gray have become well known. All died at the hands of local police, sparking waves of protest. During this time, far less attention has been paid to women who have been killed by law enforcement. Today, a vigil under the banner of Say Her Name is being organized in New York to remember them. We are joined by Kimberlé Crenshaw, professor of law at UCLA and Columbia University, founder of the African American Policy Forum and co-author of the new report, “Police Brutality Against Black Women.”

JUAN GONZÁLEZ: As the Black Lives Matter movement grows across the country, the names of Michael Brown, Eric Garner, Tamir Rice and Freddie Gray have become household names. All died at the hands of local police, sparking waves of protest. During this time, far less attention has been paid to women who have been killed by law enforcement, women like Tanisha Anderson, Rekia Boyd, Miriam Carey, Michelle Cusseaux, Shelly Frey and Kayla Moore. Well, today, a vigil under the banner of “Say Her Name” is being organized in New York to remember these and other women.

AMY GOODMAN: With us today are three guests here in New York who will be attending the vigil. Frances Garrett is the mother of Michelle Cusseaux, who was killed in 2014 at close range by a Phoenix police officer who had been called to take the 50-year-old woman to a mental health facility.

Martinez Sutton is also with us. He is the brother of Rekia Boyd, who was fatally shot [in 2012] by an off-duty police officer in Chicago.

Also with us is Kimberlé Crenshaw, professor of law at UCLA and Columbia University, founder of the African American Policy Forum. She’s the co-author of this new report. The group is releasing the report today. It’s titled “Police Brutality Against Black Women.”

Professor Crenshaw, let’s start with you. Lay out what it is that you have found.

KIMBERLÉ CRENSHAW: Well, we have known that there’s been a problem with police brutality for decades. And over the last years, as we’ve been talking about just now, there has been a movement that has grown in response to it. And there are certain frames around which we understand police brutality. There’s the driving while black. There’s the entire frame around Mike Brown being seen as literally a monster, and that justifies the excessive force that was used against him. What we know less about is how black women have experienced police brutality. And all during this time that we have been marching around police brutality, there have been a steady number of women who have also been killed, and we haven’t really known their names, we haven’t really understood their circumstances.

So, the report was basically an effort to literally lift up the names of people like Michelle Cusseaux or Rekia Boyd, to recognize that black women experience police brutality in many of the same ways that black men do and also in some ways that are different. Many of the cases that we talk about in the report involve police literally coming into people’s homes, into their bedrooms, and actually killing them. So it’s important that if we understand that the names that we repeat, the stories that we repeat, help us think about how to broaden the demands against police brutality, we have to include women in it, so some of the interventions that are necessary extend to the ways in which women are also vulnerable to police brutality.

JUAN GONZÁLEZ: And why do you think there’s been so little attention or even publicity on these women who have been killed?

KIMBERLÉ CRENSHAW: Well, I think there are a couple reasons. I mean, men, in general, are killed more by the police than women, so there are more opportunities. But women are still killed, too. And when they are killed, they’re not part of the conversation. And our argument is it’s partly because the frames that we have are not frames that are gendered, as female. We understand police brutality largely through a traditional frame of this is state-sponsored lynching, and we understand lynching as extrajudicial efforts to constrain and suppress and repress black masculinity. It is also true throughout history black women have been lynched. They’ve also been subject to other kinds of racial violence, like rape and sexual abuse. And we’re finding that not only are black women killed by police, they’re also subject to some of these same historical problems of sexual abuse. So they’re women that many people don’t believe. They’re women that are seen as vulnerable. They’re women that are not empathized with or seen as sympathetic or women in need. And so that, in turn, prompts a certain kind of coercive or violent response to them or an effort to abuse them, knowing that no one will believe them. 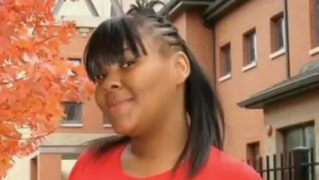