The United Nations is coming under criticism for failing to investigate allegations of sexual exploitation of children by French peacekeeping troops in the Central African Republic between December 2013 and June 2014. The Guardian obtained a leaked report that says French soldiers raped and sodomized starving and homeless young boys who they were supposed to be protecting at a center for internally displaced people during intense fighting in the country. Even after the exploitation was brought to the attention of senior U.N. officials, the U.N. never reported it to French authorities — nor did it do anything to immediately stop the abuse. So far, the only person to be punished is a U.N. aid worker, Anders Kompass, who stepped outside official channels to alert French authorities about the sexual exploitation. Kompass has since been accused of leaking the confidential report in breach of U.N. protocols and now faces dismissal. We speak to Paula Donovan, co-director of AIDS-Free World, which has launched the Code Blue campaign.

NERMEEN SHAIKH: The United Nations is coming under criticism for failing to investigate allegations of sexual exploitation of children by French peacekeeping troops in the Central African Republic between December 2013 and June 2014. The Guardian obtained a leaked report that says French soldiers raped and sodomized starving and homeless young boys who they were suppose to be protecting at a center for internally displaced people during intense fighting in the country. Even after the exploitation was brought to the attention of senior U.N. officials, the U.N. never reported it to French authorities, nor did it do anything to immediately stop the abuse. So far, the only person to be punished is a U.N. aid worker, Anders Kompass, who stepped outside official channels to alert French authorities to the sexual exploitation occurring. Kompass has since been accused of leaking a confidential report in breach of U.N. protocols and now faces dismissal.

The Guardian obtained the leaked report from Paula Donovan, who will join us shortly. She and other activists have just launched a new campaign called Code Blue, which seeks to hold the United Nations accountable for sexual misconduct. Earlier this month, the group held a press conference to announce the campaign. This is Stephen Lewis of AIDS-Free World, followed by Theo Sowa of the African Women’s Development Fund and Ambassador Anwarul Chowdhury of Bangladesh.

AMBASSADOR ANWARUL CHOWDHURY: Transparency, I think, is the keyword here. We need to be open about how many such cases are there of sexual abuse and exploitation, which countries are involved in it, what they are doing, and how the cases now being sent by the U.N. to them are being handled.

AMY GOODMAN: United Nations peacekeeping missions have long been dogged by allegations of sexual abuse, from the Democratic Republic of Congo to Kosovo to Bosnia, also Burundi, Haiti and Liberia. In March, the U.N. came under criticism for ignoring an internal report that called sexual exploitation, quote, “the most significant risk” to peacekeeping missions across the globe. The leaked document described a culture of “impunity” when dealing with sexual misconduct cases among U.N. peacekeepers, saying, quote, “UN personnel in all the missions we visited could point to numerous suspected or quite visible cases of [sexual exploitation and abuse] that are not being counted or investigated.”

For more, we go to Boston, Massachusetts, where we are joined by Paula Donovan, co-director of AIDS-Free World, which has launched the Code Blue campaign.

Paula Donovan, in the last two weeks, you’ve issued major findings. You first held a news conference at the U.N. and now released another report. Tell us what you have found.

PAULA DONOVAN: What we’ve found overall, Amy, is that there is a tremendous amount of lip service given to the zero tolerance for sexual exploitation and abuse policy by the United Nations. And that really came to light over the past month or so, when we received leaked documents about this U.N. official, Anders Kompass, who was under fire, ostensibly for having leaked a document that demonstrated how serious, very serious, documented cases of the rape and sodomy of children, of young boys in the Central African Republic, had been known to the U.N., had been documented by the U.N., and had been completely ignored by them for eight months. And what it shows is that when the United Nations learns of these abuses, it seems to be that the first—the first response is to simply lie low and see whether or not they can get away with not reporting it to governments and not alerting the public about the danger, the imminent danger that they’re in, and just sort of maintaining almost a forensic view that “we’ll watch as these abuses go on and develop, and maybe record them, but we have no obligation to intervene.”

And the Office of the High Commissioner for Human Rights and UNICEF were taking these horrible testimonies from children, as the abuse was continuing, mainly by French soldiers, also by Equatorial Guinean and Chadian soldiers, and simply sitting on the reports for a month at a time, continuing to take these documented cases and testimonies from the children, and then eventually sending them on to Geneva to the headquarters of the human rights office, where only one person stepped up and said, “I need to alert the French right away and get an investigation started.” He’s now, months and months later, under review for having handed over the document with the information about the kids and the soldiers they described to the authorities who could—in France, who could take things into hand.

NERMEEN SHAIKH: And how have the French authorities responded since this has come to light?

PAULA DONOVAN: They have—initially, they opened an investigation, a preliminary investigation, in July of 2014, when Anders Kompass first handed the document over to them. It seems as though that was stalled almost immediately by the refusal of the United Nations to allow them to—to allow the police to talk to the people who had interviewed—the U.N. staff who had interviewed the children and could give them more information about their whereabouts and about the soldiers. Then there was a long period of silence, when no one appears to have done anything. And once AIDS-Free World exposed this to the media—and that was only on April 29th, 2015—then things kicked into gear, and the French have now taken up their investigation again in earnest.

AMY GOODMAN: Paula Donovan, we only have about two minutes to go. You’re leading a campaign to get rid of immunity in the United Nations around sexual abuse and exploitation. Explain how the U.N. shields its own members from due process when they are accused of sexual assault.

PAULA DONOVAN: Under an ancient convention from 1946, the U.N. staff are all protected from being involved in any sort of legal process. So whether they’re witnesses, whether they have evidence, whether they’re the perpetrators themselves, if it has to do with sexual exploitation and abuse, then the secretary-general has to, on a case-by-case basis, decide to waive their immunity and allow them to be subject to what the rest of the world is subject to—called in to testify, cooperating with a criminal investigation, or actually arrested, in the case of perpetrators. And this just infects the entire U.N. system, and the way they deal with sexual exploitation and abuse is such a sham that we’re essentially saying it needs an external, independent investigation from top to bottom.

NERMEEN SHAIKH: And so, what do you think the U.N.—what kinds of internal changes are you calling for within the U.N. so that these allegations can be dealt with in a better way in the future?

PAULA DONOVAN: I think—right, so as the Central African Republic case shows, serious member states of the United Nations have to take hold of things, and they need to move in and figure out: When an allegation of sexual abuse is first brought to light, what are the—what are the mandated protocols? How do we respond? And then, what do the various agencies and institutions within the entities within the U.N. have to do? Should UNICEF—and my answer is absolutely yes—should they have to move in immediately to protect—

PAULA DONOVAN: —children from further abuse? The whole U.N. needs to be looked at from top to bottom by an external commission.

AMY GOODMAN: Paula Donovan, thanks so much for being with us, co-director of AIDS-Free World, which has launched the Code Blue campaign, seeking to end sexual exploitation and abuse by U.N. military and non-military peacekeeping personnel. 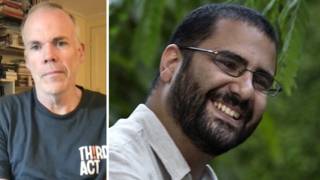