An explosive new investigation published today by The Intercept reveals the untold story of how 43 students disappeared in Mexico on the night of September 26, 2014. It is based on more than two dozen interviews with survivors of the attacks and family members of the disappeared, as well as Mexican historians, human rights activists and journalists. The Intercept also reviewed official Mexican state and federal records including communication logs by security forces and sealed testimony from municipal police officers and gang members. The evidence shows repeated inconsistencies and omissions in the government’s account of what happened when the students went missing. We speak with Ryan Devereaux, staff reporter at The Intercept and author of the two-part investigation, “Ghosts of Iguala.”

AMY GOODMAN: We turn now to an explosive new investigation called “Ghosts of Iguala,” which tells the untold story of how 43 students disappeared in Mexico. The six-month investigation by Ryan Devereaux for The Intercept is based on more than two dozen interviews with survivors of the attacks and family members of the disappeared, as well as Mexican historians, human rights activists and journalists. The Intercept also reviewed official Mexican state and federal records, including communication logs by security forces and sealed testimony from municipal police officers and gang members. The evidence apparently shows repeated inconsistencies, obfuscations and omissions in the government’s account of what happened on that night of September 26, 2014, when the students went missing.

For more, we’re joined by Ryan Devereaux, staff reporter for The Intercept, his two-part investigation, “Ghosts of Iguala.”

Welcome back to Democracy Now!, Ryan. So you spent last November in Mexico, and you’ve been researching this for many months. What is the latest information on what these parents desperately fear but do not believe at this point that the students, the 43 students, are dead?

RYAN DEVEREAUX: Well, the latest sort of official statement coming out of the federal government in Mexico, the last major sort of turn of events in the case, was in January, when the federal government declared that they had arrived at their legal certainty regarding the students’ fate—namely, that the students were taken by municipal police, handed over to a gang and then incinerated in a trash pit outside of a small town named Cocula. They said that this was the historical truth. And this historical truth was based on testimony provided by detained gangsters, who said that they took part in the events. And there are numerous reasons to question this account that the government has delivered. The Argentine team of investigators that the parents have brought on are continuing their investigation, but the government, the federal government, has worked very hard to effectively say that this case is closed, that they know what happened, but there are all sorts of reasons to question that.

AMY GOODMAN: Now, it has been said that one set of remains were found of one of the students?

RYAN DEVEREAUX: That’s true. One of the students, Alexander Mora Venancio, his remains were recovered, and that was confirmed by the independent Argentine investigators, the team that works with the parents. But it should be pointed out the Argentine team wasn’t present when the federal government recovered those remains in the area near Cocula in the trash pit, where the government says the students were incinerated. In other words, there has been no independent confirmation that the remains were recovered in the area where the government says they were recovered, and, furthermore, that Mora Venancio died in the way that the government described. The government says that because they discovered these remains, that means that the narrative provided by their detainees is true and that the other 42 students shared his supposed fate. And to date, there’s no evidence to indicate that’s true.

AMY GOODMAN: So, take us through the official account of what happened. And what were the key findings in your investigation, Ryan?

RYAN DEVEREAUX: So, according to the government’s account, the students arrived in Iguala on the night of September 26, and there was a confrontation with municipal police. The local mayor, his wife was having an event that night that a lot of people in the area sort of believed was an unofficial kick-off of her campaign to replace him in office, and the mayor supposedly was concerned that the students were going to disrupt this event. The students had been attempting to secure buses. That’s sort of what they do as sort of activist students. They commandeer buses and use them to travel around to observe rural school teachers at work—that’s what they’re all studying to become—and to go to protests. There was a large protest coming up in October, this past year, that the students were preparing for.

RYAN DEVEREAUX: In Mexico City. And this protest was going to sort of commemorate one of the darkest days in Mexican history. Sort of tragically, ironically, this was the massacre of student activists in 1968. So they were trying to get buses to attend this event. They end up in Iguala, and there’s a confrontation with the municipal police. Three of the buses that the students have are traveling through the center of the city, and two are heading out onto the highway. The police attempt to cut them off. There’s gunfire. The students believe initially that the officers are firing warning shots but soon learn that they’re actually shooting at the students. The majority of the students are taken in Iguala off of the third bus trying to make it through the city. The attacks spill over onto the highway. Students are attacked on the highway, removed from their bus. Another group of totally unarmed civilians, totally unrelated to everything that was going on, a team of semi-professional soccer players, is also attacked by gunmen on the highway. A number of people are killed. By the time the sun comes up the next day, you have dead bodies in three locations. You have students killed at the intersection. You have bystanders killed on the highway. And you have one student, Julio César Mondragón, who’s found in a dirt lot not far from the scene of the attacks. His face has been cut off. His ears have been cut off. His eyes have been removed. It’s a truly gruesome crime.

The government says that once the students were taken, they were handed over to local gangsters, where they were driven out to a trash pit outside of a small town near Cocula. The government claims that the remaining students, those who hadn’t suffocated on the way out to the pit, were interrogated about their presence in Iguala that night and then executed one by one. They were thrown into a pit, a pyre was made out of their bodies, and they were incinerated over the course of something between 12 and 15 hours. Their remains were smashed to dust, loaded into trash bags and tossed into a nearby river. The government claims that it recovered remains from those bags. And those remains were sent to experts in Austria and examined. And it was through the examination of those remains that the government was able to announce its positive identification of the one student, Alexander Mora Venancio.

AMY GOODMAN: So, the local mayor and his wife are ultimately arrested. They had fled, were found in Mexico City. The government says it was the combination of them working with local drug gangs. What indicates it goes higher?

RYAN DEVEREAUX: Well, the files that we revealed—or, that we reviewed, I should say, detail communications among security forces in the area. And these include communications that were sent to army, federal police, state police working in the area at the time. Through Mexico’s transparency law, earlier this year a small handful of journalists managed to get a hold of military records, logs from—logs and documents pertaining to the night in question. And those records show that the Mexican army knew full well of the students’ presence in the town that night. They were on the street patrolling. They intercepted students at a hospital, a sort of a medical clinic where they were attempting to get care. And so, the army, for sure, knew that the students were there that night. There were records of the students coming into Iguala before they got there, well before the—well before the shots were fired. And so, in cases of enforced disappearance, which is a sort of key question in this case—whether or not this was a case of enforced disappearance—you don’t need to have directly participated in taking students for an investigation to be triggered. State actors that have knowledge of a disappearance happening can be held accountable. And what the records that we have reviewed indicate is that the army certainly had some sense of what was going on that night.

AMY GOODMAN: And why, in this last two minutes that we have—why do you think it’s so important to bring this charge of enforced disappearance? What would it do? Who would be arrested?

AMY GOODMAN: And how does this relate to the U.S.-Mexico relationship and the enormous amount of money the U.S. gives to the Mexican government?

RYAN DEVEREAUX: Well, in the clips you played earlier, there was discussion about Peña Nieto and President Obama’s meeting in January. That was on January 7th. One day before, in the state of Michoacán neighboring Guerrero, at least 16 people were killed by federal police. It was the third state-sponsored massacre in less than a year. You have that case, you have Iguala, and then you have the Tlatlaya case earlier last year in which the army was accused of killing 22 innocent civilians. Those are three cases in the course of a single year, three different levels of Mexican security forces. The United States has sent billions of dollars to Mexico since the beginning of the so-called war on drugs in Mexico, and we have evidence of just tremendous systemic human rights abuses. And those need to be addressed in a real, substantive way in the United States, and they haven’t been so far.

AMY GOODMAN: Ryan Devereaux, we want to thank you for being with us. Of course, we’re going to link to your piece at The Intercept, new piece, “Ghosts of Iguala,” in two parts [part one, part two].

That does it for our show. Congratulations to our director, Becca Staley, on the birth of her daughter, Reese Anne Staley, born May 1st, weighing seven pounds eight ounces. And a very happy birthday to—a landmark birthday for Denis Moynihan. 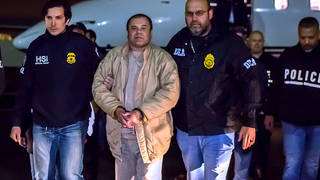