Louisiana has delayed the release of former Black Panther Albert Woodfox, the longest-serving U.S. prisoner in solitary confinement, after appealing a judge’s order for his freedom. Earlier this year, a Louisiana grand jury re-indicted Woodfox for the 1972 murder of a prison guard, a crime for which he and his late, fellow Angola 3 member Herman Wallace maintained they were framed for their political activism. Wallace died on October 1, 2013, just three days after he was released from prison. On Monday, Federal Judge James Brady not only called for Woodfox’s release, but also barred a retrial. Woodfox’s two previous convictions in the case were both overturned. But on Tuesday, Louisiana filed an appeal to the Fifth Circuit, and that court issued a stay on Judge Brady’s order until 1 p.m. this Friday. Woodfox’s lawyers have until 5 p.m. today to file a response. We are joined by Woodfox’s attorney, George Kendall, as well as the Angola 3’s Robert King, who spent 29 years in solitary confinement.

JUAN GONZÁLEZ: We end today’s show looking at the pending release of the longest-serving U.S. prisoner in solitary confinement. On Monday, Federal Judge James Brady ordered the immediate release of Louisiana prisoner and former Black Panther Albert Woodfox. Earlier this year, a Louisiana grand jury re-indicted Woodfox for the 1972 murder of a prison guard, a crime for which he and his late, fellow Angola 3 member Herman Wallace maintained they were framed for their political activism. Wallace died on October 1st, 2013, just three days after he was released from prison. On Monday, Federal Judge James Brady not only called for Woodfox’s release, but also barred a retrial. Woodfox’s two previous convictions in the case were both overturned.

AMY GOODMAN: For the past 40 years, Albert Woodfox has been kept in a six-by-nine cell for 23 hours each day. At the facility where he’s currently housed, he’s only allowed out of his cell three days a week. Judge Brady said his order to release Woodfox was based on five factors: quote, “Mr. Woodfox’s age and his poor health, his limited ability to present a defense at a third trial in light of the unavailability of witnesses, this Court’s lack of confidence in the State to provide a fair third trial, the prejudice done onto Mr. Woodfox by spending over forty years in solitary confinement, and finally the very fact that Mr. Woodfox has already been tried twice and would otherwise face his third trial for a crime that occurred over forty years ago,” unquote.

Well, Louisiana has now filed an appeal to the Fifth Circuit Court of Appeals, and that court has issued a stay on Judge Brady’s order until 1:00 p.m. this Friday. It gave Woodfox’s lawyers until 5:00 p.m. today to file a response to the state’s appeal. In a minute, we’ll get the latest news from his lawyer. But first, this is a clip of Albert Woodfox speaking in his own words on a prison pay phone in the 2010 documentary, In the Land of the Free.

ALBERT WOODFOX: And I thought that my cause, then and now, was noble. So, therefore, they could never break me. They might bend me a little bit. They may cause me a lot of pain. They may even take my life. But they will never be able to break me.

AMY GOODMAN: Those, the words of Albert Woodfox. For more, we’re joined by two guests. In New Orleans, Louisiana, George Kendall is Albert Woodfox’s defense attorney. In Austin, Texas, we’re joined by Robert King, member of the Angola 3 who spent 29 years in solitary confinement for a murder he did not commit. He was released in 2001 after his conviction was overturned. He’s written a book about his experience, From the Bottom of the Heap: The Autobiography of Black Panther Robert Hillary King.

We welcome you both back to Democracy Now! George Kendall, you’re in New Orleans. What is going on? The judge demanded that Albert Woodfox be immediately released, but that’s not happening as of this moment.

GEORGE KENDALL: Judge Brady issued a very thoughtful opinion that looked at all the circumstances in this case and, using the power he has as a federal judge, said, “Enough is enough. Mr. Woodfox needs to be released.” The state of Louisiana is unwilling to let this case go. It filed an immediate appeal in the Fifth Circuit Court of Appeals. And as you reported, that court has issued a temporary stay until Friday at 1:00 p.m. It has given us until 5:00 p.m. today to file our brief. We were up all night, and we will file a very good, strong brief by 5:00, and we are hopeful that the court will dissolve that stay on Friday afternoon so Mr. Woodfox can come home.

JUAN GONZÁLEZ: And, Robert King, your reaction, more than a decade after you were released and your conviction overturned, your fellow Angola 3 member still in prison, and your reaction to the latest developments?

ROBERT KING: Well, we think it’s a pretty astounding decision for the judge to take that position. But we—you know, I spoke with Albert recently. We are still cautiously optimistic about it, about what could happen, the process that still needed to—that we still need to go through. But I am elated that the judge made that decision. And it’s about time, long overdue. And like judge spoke of, Judge Brady decided that, you know, Albert should be freed. He spent 40 years in solitary confinement, 43 years and counting, because he’s still in solitary confinement. He’s isolated, even though he’s no longer in prison. And I think the judge made the right decision. But again, you know, we are cautiously optimistic. I hate to use that term. We shouldn’t have to be. But, you know, knowing this case, this case has had many ups and downs and many hurdles to jump, and there still may be a couple more. But we’re hoping this, that by Friday, that this is indeed just a temporary stay that was granted and that Albert would be released, you know, this Sunday.

AMY GOODMAN: George Kendall, Teenie Verret, the widow of the prison guard that Louisiana says was killed by Albert Woodfox, Brent Miller and Herman Wallace, Verret was just 17 when her husband, Brent Miller, was stabbed to death in 1972, the prison guard. She said, a few years ago, she did not believe that Woodfox and Wallace were guilty. And she said at that time that they should be released. George Kendall, describe—Robert King just said that Woodfox is not in the prison, he’s in jail. But how he is being treated, even now—body cavity searches—and the civil lawsuit that has been filed.

GEORGE KENDALL: Right, well, he was moved in February of this year from the Louisiana prison system to a parish detention center to await his retrial. He was very quickly re-indicted, but he remains—as Robert King just told you, he is in a cell 23 hours a day three days a week, and 24 hours a day the other four days a week. And unlike at Angola, where at least he was behind bars, or at Wade Correctional Center, where he spent the last four years without any disciplinary charges whatsoever, he currently is housed behind a steel door. And so this really is—his ability to have contact with neighbors and all is virtually nonexistent. So he is under even more harsh conditions awaiting this new trial than he was in the Louisiana prison system.

JUAN GONZÁLEZ: And how do prison authorities justify 40 years of isolation? I mean, forget about the injustice of the actual case itself, but the solitary confinement?

GEORGE KENDALL: They have long said that—the only reason they give is that he will remain there because of the original reason for his placement there, and that was the suspicion that he was involved in the murder of Mr. Miller. What these units are supposed to be for are temporary housing, that if somebody misbehaves in a significant way, they go to one of these tiers, where they spend 23 hours a day in a cell for weeks, sometimes months, sometimes a few years. But when you demonstrate good behavior, as Mr. Woodfox has for decades, as Robert King did for decades, as Herman Wallace did for decades—he has remained in 23-hour-a-day lockdown. There’s no penological justification whatsoever. The reason is, is because no warden in the system wanted to be the one who released who many correctional officers feel were the killers of Brent Miller back into general population.

AMY GOODMAN: Yet, when Herman Wallace was released, on his deathbed, dying of cancer in 2013, a federal judge had to threaten the warden, if he didn’t release him, he, the warden, would be imprisoned. Robert King, we only have a minute, but you served solitary confinement for 29 years. This is 42 years now. You all had tried to form a chapter of the Black Panther Party, which is the reason you felt that they felt they were charged with the prison guard’s murder. Can you wrap by saying your thoughts on him in solitary confinement, Albert Woodfox?

ROBERT KING: I’ve been out now, you know, 14 years, going on 15. Albert has done 14 years more than I have done in solitary.

AMY GOODMAN: I wanted to end with Albert Woodfox’s words back in 2010.

ALBERT WOODFOX: Our primary objective is that front gate. That is what we are struggling for, and we are actually fighting for our freedom. We are fighting for people to understand that we were framed.

OPERATOR: This call originates from a Louisiana correctional facility and may be recorded or monitored.

ALBERT WOODFOX: That we were framed for a murder that we are totally and completely and actually innocent of.

OPERATOR: You have 15 seconds left on this call.

ALBERT WOODFOX: Let me call you back.

AMY GOODMAN: That was Albert Woodfox from the 2010 documentary, In the Land of the Free. And that does it for our show. George Kendall and Robert King, thanks so much for being with us. 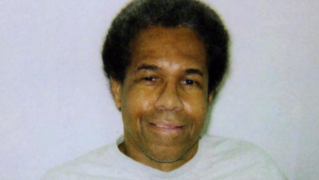