This week has seen a new round of restrictions on reproductive rights in the United States. In Texas, a federal appeals court Tuesday upheld anti-choice provisions which threaten to leave Texas with just 10 or fewer abortion clinics. The ruling upholds restrictions forcing abortion facilities to meet the standards of hospital-style surgery centers and forcing providers to obtain admitting privileges at a nearby hospital. If the decision goes into effect in about 20 days, attorneys for the clinics have estimated about 900,000 reproductive-age women will live more than 150 miles from the nearest open abortion facility in the state. The clinics plan to take their appeal to the Supreme Court. Meanwhile, Florida Governor Rick Scott has signed a bill into law forcing women to wait at least 24 hours to have an abortion. And the Wisconsin state Senate has approved a bill that would ban abortions after 20 weeks of pregnancy. Like similar bans in other states and a federal ban passed by the U.S. House last month, the bill is based on the medically debunked claim fetuses can feel pain after 20 weeks. We are joined by Heather Busby, executive director of NARAL Pro-Choice Texas.

NERMEEN SHAIKH: We end today’s show with a look at the latest restrictions on reproductive rights in the United States. In Texas, a federal appeals court Tuesday upheld anti-choice provisions which threaten to leave Texas with just 10 or fewer abortion clinics. In 2013, when the sweeping anti-choice law passed despite popular protest and an 11-hour filibuster by Texas State Senator Wendy Davis, Texas had more than 40 clinics. Since then, more than half of them have closed as a battle over access has raged in the courts. Now, a decision by a panel of the Fifth Circuit Court of Appeals threatens to shutter about half of the remaining 18 clinics.

The ruling upholds restrictions forcing abortion facilities to meet the standards of hospital-style surgery centers and forcing providers to obtain admitting privileges at a nearby hospital. It provides narrow exemptions for a single doctor at a clinic in the South Texas city of McAllen, on the grounds that forcing women to travel 235 miles or more to the nearest clinic would be an undue burden. But it remains unclear if the clinic can stay open. When it came to the plight of women in the Far West Texas city of El Paso, the appeals court said they could travel to New Mexico rather than take the estimated 1,000-mile round-trip journey to the nearest open abortion clinic in Texas.

AMY GOODMAN: If the decision goes into effect in about 20 days, attorneys for the clinics have said about 900,000 reproductive-age women will live more than 150 miles from the nearest open abortion facility [in Texas]. The clinics planned to take their appeal to the Supreme Court. In a statement, Nancy Northup of the Center for Reproductive Rights said, quote, “Not since before Roe v. Wade has a law or court decision had the potential to devastate access to reproductive health care on such a sweeping scale,” unquote.

Meanwhile, in Florida, Governor Rick Scott has signed a bill into law forcing women to wait at least 24 hours to have an abortion, and the Wisconsin state Senate has just approved a bill that would ban abortions after 20 weeks of pregnancy. Like similar bans in other states and a federal ban passed by the U.S House last month, the bill is based on the medically debunked claim fetuses can feel pain after 20 weeks. It does not provide exceptions for rape or incest.

To find out more about the impact of these restrictions, we’re going right to Texas, to Austin, to speak with Heather Busby, executive director of NARAL Pro-Choice Texas.

Welcome to Democracy Now!, Heather. Start in Texas. What has taken place there?

HEATHER BUSBY: So, over the past few years, we’ve seen a couple of things happen. I want to back up first to 2011, when the Legislature cut funding for family planning by nearly two-thirds, and we’ve lost over 80—that’s eight, zero—family planning clinics across the state, most of those in rural and underserved areas. So, you can’t prevent pregnancy, and then you have an unintended pregnancy, and the state has devastated that access, as well. Like you said, we’ve lost more than half of the clinics in the state, and we’re looking at going down to only eight to 10 clinics. For a state that has 27 million people, that is just unacceptable. And we are already seeing long wait times, women who are forced further along into their pregnancy, which further jeopardizes their health and safety—the exact opposite of what the purported intent of this law was. We all know that was a farce, that this was really about making abortion completely inaccessible. And we know that that most impacts those who are the most vulnerable in the state: Low-income people, young women, people who live in rural areas are so hard hit by this law.

HEATHER BUSBY: So, you know, I can speak to my experience in actually talking to people who are struggling to access abortion care. And first of all, there’s getting the money together, and that can often take weeks, and then trying to get an appointment at a clinic. And you have to go actually twice to a clinic—once for the mandatory state written materials, where the doctors basically have to lie to their patients, and then—and for the forced sonogram, and then, 24 hours later, if you can get an appointment 24 hours later, you have to then go back to the clinic for your procedure. For some people, that can often mean multiple trips, multiple overnight trips, if they have a two-day procedure, for example. So, it’s really a burden on folks because, you know, you’re losing time from work, time away from your children and your family, trying to get transportation. And in Texas, you know, this is the second largest state. If you’re out in West Texas, where there’s no public transportation infrastructure, if you don’t have reliable transportation, if you can’t get a ride, you have no access at all. Abortion may as well be illegal for you.

AMY GOODMAN: I want to ask about one of the responses to the recent legislation on HB 2 in Texas. The anti-choice group, Texas Right to Life, wrote, quote, “Although unpredictable, the Supreme Court could solidify Texas’ Pro-Life protections while concomitantly strengthening Pro-Life laws for every state by defining clearer standards of the notion of 'undue burden'—the vague term upon which the abortion industry founded their legal opposition to HB 2,” unquote. Heather, could you respond and also explain the concept of undue burden?

HEATHER BUSBY: Right. You know, I find that statement particularly cruel. They want to define undue burden as no burden is too great. And, you know, what I’ve seen is the exact opposite of that for people who are struggling to put foods in their children’s mouths, struggling to access the reproductive healthcare that they need, or just healthcare in general. Keep in mind, Texas has refused to expand Medicaid. We have the highest uninsured rate in the country. So, you know, to say that they want the Supreme Court to basically define undue burden as no burden is too great—you know the one thing I will agree is that I would like to see a little more judicial clarity when it comes to undue burden. That standard is quite unclear. It’s definitely an exception, when you look at constitutional jurisprudence, to have such a nebulous concept as undue burden. And, you know, unfortunately, the Fifth Circuit is one of those courts that’s very conservative, very ideologically conservative, and makes their decisions fit that mindset. And for them, you know, I was actually surprised that 235 miles they considered undue burden. I think 100 miles is too far, and especially if you don’t have access to transportation, you don’t have money, you can’t miss work, you’ve got children at home. The burdens of all of these laws cumulatively are insurmountable for so many people in this state and across the country. So, you know, I really wish that the courts would have a little more compassion for the struggles of everyday people’s lives.

NERMEEN SHAIKH: So I want to turn to comments, very quickly before we conclude, made by Wisconsin Governor Scott Walker. Earlier this month, he said he would sign Wisconsin’s proposed bill banning abortions after 20 weeks. When asked by reporters about the lack of an exception for rape, Walker said women who become pregnant from rape and incest are most concerned about it in the, quote, “initial months.” Could you respond to that?

HEATHER BUSBY: Well, I think that is just incredibly cruel. To say that, you know, to put himself in the place of a rape survivor and try and make assumptions about what that person is going through, is just—it just floors me. And it’s completely opposite of what we know about trauma and PTSD and what survivors go through. You know, it assumes that you go through this traumatic experience, and you’re just on top of your game, taking care of things, just getting it done. That’s not the way it works. You know, you have to process that trauma, and that can take months.

AMY GOODMAN: We have to break, and I want to thank you very much for being with us.

AMY GOODMAN: Heather Busby, executive director of NARAL Pro-Choice Texas. Of course, Governor Walker, governor of Wisconsin, is believed to be planning a run for the presidency. That does it for our show. 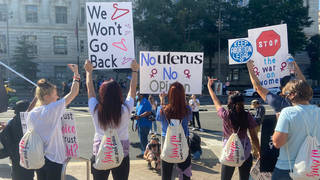