On Friday’s Democracy Now! we dedicated the hour to the Charleston shooting.

Below are updates from Twitter and around the web:

Is nowhere safe for black Americans? A medidation from @JamilSmith: http://t.co/Si1I6koYaW pic.twitter.com/xzU91XfQQK

Let’s call Charleston for what it is: Terrorism. http://t.co/qjj6G3iLO1 pic.twitter.com/YkRC0dFqgJ

Obama on #CharlestonShooting: “This kind of mass violence does not happen in other advanced countries.” http://t.co/uAbSmM8IIq

Obama speaks on #CharlestonShooting: 'I’ve had to make statements like this too many times' http://t.co/Z5HoHD5hdN pic.twitter.com/mgenglI3Lb

A pastor, a track coach, a recent grad & a librarian. Here's what we know about the #CharlestonShooting victims http://t.co/m9VoEDmhc9 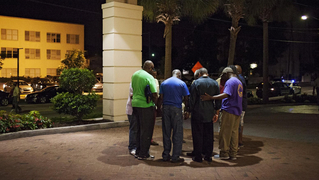