South Carolina Massacre: Why Don’t We Call Killing of 9 Black Churchgoers an Act of Terrorism?

Why are so many politicians and much of the media afraid to call the mass shooting an act of terrorism? We discuss the double standards in coverage of shootings carried out by white attackers with two guests: Anthea Butler, associate professor of religion and Africana studies at the University of Pennsylvania; and Rev. Dr. Raphael Warnock, senior pastor of the Ebenezer Baptist Church in Atlanta, Georgia, which was the spiritual home of Dr. Martin Luther King Jr.

StoryJun 23, 2015“Perpetrator Has Been Arrested, But Killer is Still at Large”: Calls Rise to Remove Confederate Flag

AMY GOODMAN: To talk more about the massacre in Charleston, in addition to Dr. Raphael Warnock in Atlanta, we’re joined in Philadelphia by Anthea Butler, associate professor of religion and Africana studies at the University of Pennsylvania, author of Women in the Church of God in Christ: Making a Sanctified World. Professor Butler has just written a new piece for The Washington Post; its headline, “Shooters of color are called 'terrorists' and 'thugs.' Why are white shooters called 'mentally ill'?”

Anthea Butler, would you continue on this point? Talk about the issue of who we call terrorists and who we don’t.

ANTHEA BUTLER: Yeah, thank you, Amy, for having me. I really respect the show. The reason why I believe that whites are often—and white shooters, especially male white shooters, are always called “mentally ill” is that it’s a soft pedaling of part of the structure of racism in America. Whenever you hear about a Muslim doing something or suspected of doing something, or a black man or a black woman, they are always “terrorists”; it’s “terrorist activity”; there are pejorative words that are used to describe them; they are dehumanized; they are, you know, the vilest people on Earth. When somebody white does something in this country, there are excuses. White youth who are young men, as Dylann Roof is, are called “boys.” They are, you know, infantilized. A young man like Trayvon Martin is called a “hulking young man.” It’s a clear sign of the racist infrastructure underneath this country, and part of that has had to do with the media and these portrayals and the constant drumbeat of all of these kinds of racial stereotypes and religious stereotypes that have caused us harm in this nation.

JUAN GONZÁLEZ: And in terms of Dylann Roof, it’s been particular. He went not only—he’s been—you know, they normally have what the police call the perp walk, when they allow the cameras to shoot them being brought in or out of a station. Here, you see a situation where he’s handcuffed, but also has a bulletproof vest on him, which I don’t recall being the situation, for instance, with the young men in the Boston marathon bombing or many of these other incidents that we’ve had. Even the images that the media is allowed to see of these accused killers is very different.

ANTHEA BUTLER: Yeah, no, exactly. And one of the things I thought yesterday about the picture of Dylann Roof was that the putting the vest on him made him seem somewhat frail, when this was the same person who sat in a Bible study for an hour and then shot everybody dead. There’s nothing frail about his terrorist and his racist behavior that he did. And so, this is kind of this—you know, this sense in which whiteness is so protected in these sort of—they don’t even understand, I think, how much they do it. It’s just ingrained. It is a practice of law enforcement, media and others in this nation.

And what’s happening now—and I think this is really important to stress—is that the impact and the democratization of everybody having social media, having a camera on their phone, being able to show these discrepancies and show things in a profoundly different way, has changed the perception in this nation, and people are starting to see the truth.

ANTHEA BUTLER: Although some of them, who are on my Twitter feed, don’t do it.

AMY GOODMAN: On Thursday, Fox News host Steve Doocy expressed incredulity that the Charleston shooting was a hate crime. He and his guest, Pastor E.W. Jackson, suggested the shooter attacked the historically black church for its biblical views, not because of racism. This is E.W. Jackson and Steve Doocy.

E.W. JACKSON: I’m deeply concerned that this gunman chose to go into a church, because there does seem to be a rising hostility against Christians across this country—

E.W. JACKSON: —because of our biblical views.

STEVE DOOCY: And some look at it as, well, it’s because it was a white guy, apparently, in a black church. But you made a great point just a moment ago about the hostility toward Christians. So—and it was a church, so maybe that’s what they’re talking about. They haven’t explained it to us.

AMY GOODMAN: So that’s Fox. Dr. Raphael Warnock, this issue of domestic terrorism and the issue of hate crime—immediately, the mayor of Charleston and the police chief of Charleston, both white, before Roof was caught, but after the massacre, said this is a hate crime, very straightforwardly. But the fact is that South Carolina is one of five states, along with your state, Georgia, I think Wyoming and Indiana—these states do not have hate crime legislation. Can you talk about what it means to be a hate crime, and whether you think this is outright terrorism, and what that would mean if we called it that?

REV. RAPHAEL WARNOCK: This is clearly a hate crime. The perpetrator said as much. He has demonstrated. We’ve seen the pictures of him on his Facebook page brandishing the flag of Rhodesia, now Zimbabwe, in the days when it was basically a white supremacist state, the old apartheid South Africa. So we know something about the ideology of this deeply misguided person.

But it’s also an act of terror, and it has to be connected historically to the long reign of terror perpetrated against African-American communities. He said to one of the survivors, “Yes, I’m going to allow you to survive so you can tell the story.” Well, we have to ask: Well, what work does that story do? I’m not a lawyer. It’ll be interesting to see how the lawyers push back and forth, and discuss the technicalities around this, but it’s clear to anybody who’s looking at this, it seems to me, that this is an act of terror, committed not—and I’m a Christian—not because these people were Christian, but because they were African-American.

And he said that “you are raping our women, and you are taking over the country.” We should ask ourselves, where did he get this idea that “you are taking over our country”? And Fox News bears a lot of responsibility for this kind of consciousness in our country. They have trafficked this kind of political rhetoric of “we need to take our country back.” This 21-year-old man, born in the late 1990s, reminds me—you know, I’ve got young nephews that age. What does he know about this? Someone taught him how to hate.

And so, we have to condemn the hate crime, condemn this act of terror, but we also have to condemn the kind of hate speech that is very often—very often shows up as a kind of coded political speech, a kind of dog whistle, the suggestion that the current occupant in the White House is somehow from somewhere else, that he’s not one of us. I believe a man who spent six years saying that has now announced that he’s a candidate for president of the United States. This might be cute—

REV. RAPHAEL WARNOCK: —rhetoric for some, but it’s not a joke. It’s not a joke at all. And we’ve seen again that it can have very deadly consequences.

AMY GOODMAN: Well, Reverend Dr. Raphael Warnock, senior pastor of the Ebenezer Baptist Church in Atlanta, we’d like to ask you to stay with us as we move on to this issue of gun control, President Obama’s plea, his call yesterday, in anger, as he responded to the massacre in Charleston. But I also want to thank our guests who have been with us from Philadelphia: Reverend Mark Kelly Tyler, pastor of Mother Bethel AME Church in Philadelphia, as well as Anthea Butler, associate professor of religion and Africana studies at the University of Pennsylvania. Dr. Warnock, in our next segment, we’ll be joined by a survivor of another massacre, Virginia Tech, where 32 students and teachers were gunned down. Stay with us.

“It is in Our Power to Do Something”: After Another Massacre, Will Public Mobilize for Gun Control?

NEXT“It is in Our Power to Do Something”: After Another Massacre, Will Public Mobilize for Gun Control? 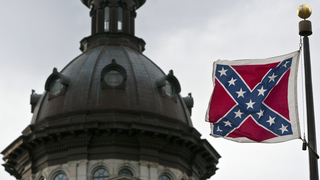 “Perpetrator Has Been Arrested, But Killer is Still at Large”: Calls Rise to Remove Confederate Flag