“It is in Our Power to Do Something”: After Another Massacre, Will Public Mobilize for Gun Control?

President Obama has called for action on gun control following the “senseless” shooting in a black church in South Carolina. “At some point, we as a country will have to reckon with the fact that this type of mass violence does not happen in other advanced countries,” Obama said. “And it is in our power to do something about it.” We are joined by two guests: Colin Goddard, survivor of the 2007 Virginia Tech massacre that left 32 people dead and now a senior policy advocate at Everytown for Gun Safety; and Rev. Dr. Raphael Warnock, senior pastor of the Ebenezer Baptist Church in Atlanta, Georgia, which was the spiritual home of Dr. Martin Luther King Jr.

JUAN GONZÁLEZ: As we continue our coverage of the church massacre in Charleston, South Carolina, on Thursday President Obama expressed anger over what he described as the “senseless” shooting in a black church in South Carolina.

PRESIDENT BARACK OBAMA: I’ve had to make statements like this too many times. Communities like this have had to endure tragedies like this too many times. We don’t have all the facts, but we do know that, once again, innocent people were killed, in part, because someone who wanted to inflict harm had no trouble getting their hands on a gun. Now is the time for mourning and for healing. But let’s be clear: At some point, we as a country will have to reckon with the fact that this type of mass violence does not happen in other advanced countries. It doesn’t happen in other places with this kind of frequency. And it is in our power to do something about it. I say that, recognizing the politics in this town foreclose a lot of those avenues right now. But it would be wrong for us not to acknowledge it. And at some point, it’s going to be important for the American people to come to grips with it.

JUAN GONZÁLEZ: A clearly frustrated President Obama speaking Thursday afternoon. Meanwhile, the Charleston Post and Courier has apologized to readers for running a gun range ad on the cover of Thursday’s edition. The paper ran a banner headline that read “Church attack kills 9,” but a sticker ad was placed on top of the headline, saying, “Ladies’ Night” at the ATP Gun Shop & Range in Summerville, South Carolina. The ad says, quote, “$30 gets you everything!” including eye and ear protection, a pistol or revolver, and 50 rounds of ammo for use on the shooting range.

AMY GOODMAN: Joining us now in Washington is Colin Goddard, survivor of the 2007 Virginia Tech massacre that left 32 people dead, now a senior policy advocate at the group Everytown for Gun Safety. And still with us in Atlanta is the Reverend Dr. Raphael Warnock, serving as senior pastor at Ebenezer Baptist Church in Atlanta, Georgia. It’s the spiritual home of Dr. Martin Luther King Jr. Yesterday, a major ceremony last night, as Muslims, Jews, Christians came together to remember those who died in Charleston.

Your response, Colin? We have had you on, massacre after massacre. In fact, President Obama, it is said, since he came into office, has gotten up at the podium 14 times to talk about mass killings in this country.

COLIN GODDARD: And the president is absolutely right. It is beyond time that we have the serious conversation and take action. You know, I’ve heard so many people say, “You know, now is not the time.” And the fact that if today is like any average American day, 88 more of us are going to shoot somebody else or shoot ourselves and die from gun violence today. So, with that theory, there will never be a time. It is, you know, too late, in fact, to have this conversation.

You know, so the fortunate thing is, though, that more Americans actually are having this conversation at the local level and are taking action. We are seeing more action in states to do a better job of keeping guns away from dangerous people. Even the state of South Carolina this year passed a law that keeps guns away from convicted domestic abusers. We see states like Washington state pass by vote initiative background checks on all gun sales. The state of Oregon just recently followed suit and enacted the same law. And at the same time, we see states reject the NRA’s agenda of allowing more guns and forcing universities to allow guns in classrooms in places like Nevada and Wyoming, removing all training requirements to carry a loaded gun in public in the first place in places like Montana.

So, you know, I know our country thinks that there is nothing we can do, but we are now seeing, firsthand, action on this. And it’s going to take a while to get to the national level to change the dialogue, because too many people in Washington, D.C., have the old way of thinking, that if you talk about changes to gun policy, it’s not going to win you your next election. You know, it is a dynamic that is not a light switch to flick, but something that is going to take grassroots support. And we are beginning to see the next wave of movement for something to actually be done on this issue.

JUAN GONZÁLEZ: And, Colin Goddard, this incredible, almost bizarre, irony that the newspaper article that is talking about what happened in South Carolina, on its front page, has gun ads for it.

COLIN GODDARD: It is sad, tragic irony, indeed. And it shows the state of affairs in this country. But like I said, I find solace in the fact that now there are more than two-and-a-half million Americans a part of the organization I’m a part of, Everytown for Gun Safety, that are demanding action from legislative officials. You know, the NRA has something like five million, and they’ve been around for a hundred years, and we’ve gotten two-and-a-half million in a very short period of time. You know, Americans are realizing there are steps that we haven’t taken yet that we can take, and they’re realizing that their involvement in this process, them telling their elected officials that this is something I care about, not just this week after something has happened and grabbed our national attention, but in next month and the following month, and that sustained activity on this issue will see—will see us achieve the day where we actually make improvements and do a better job of keeping guns out of the hands of people who inflict such carnage.

AMY GOODMAN: Do you still have bullets in you?

AMY GOODMAN: How do you respond to people like Sean Hannity, to a number of Republican politicians, who, when asked in the wake of the killing, “What about what President Obama has raised?” and they attack Obama for using this as a political opportunity instead of just mourning the dead?

COLIN GODDARD: I don’t think it makes any sense. Like I said, you know, it is beyond time. We should have had the conversation about how we can improve gun policy, you know, two days before this happened, yesterday. We have to have it today. We have to do it—you know, there is nothing we can undo, what happened in Charleston, but what we can do is act to prevent the next shooting from occurring to more of our American citizens.

And so, you know, frankly, they’re trying to divert the conversation. They’re trying to have a conversation about anything else except for the easy accessibility to guns that we allow the gun industry in America to set the rules on. And it’s something, like I said, that we are now seeing more Americans realize the problem, realizing how they can fix it and be a part of the solution, and in places—you know, as places like South Carolina itself are taking the steps, where NRA A-rated members of the Legislature are voting to keep guns away from convicted domestic abusers, a dynamic we did not see on this issue for a long time, and we are seeing now it begin on a local level, and we’ll take it from there.

REV. RAPHAEL WARNOCK: Well, this is a moral issue. Dr. King said it best, perhaps. He said that if we live by the principle of an eye for an eye, that leaves everybody blind. And I think we can’t allow a few extremists to use the kind of demagoguery that confuses this issue.

After Sandy Hook, I think the data showed that about 90 percent of Americans, believe it or not, supported some level of reasonable gun reform, and still it did not happen. And it’s because the other issue that’s driving this issue is the vast and inordinate influence of money in politics. Too often we have the best politicians that money can buy. And that, for me, is a moral issue. But somehow, moral voices, people of goodwill, have to stand up and speak truth to power. It’s our democracy that we have to reclaim in a moment like this.

AMY GOODMAN: We want to thank you both for being with us, especially on this day, Juneteenth. That’s right, June 19th in 1855 was the day that African Americans in Texas learned, two years after the Emancipation Proclamation, that the slaves had been freed. That does it for our broadcast. Reverend Dr. Raphael Warnock, Colin Goddard, thanks for joining us.

I’ll be speaking in Custer, Wisconsin, Saturday at 1:00.

Democracy Now! is hiring a senior news producer and engagement editor. Find out all the details at democracynow.org. 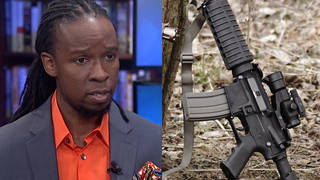