On Monday, President Obama made history by becoming the first sitting U.S. president to visit Ethiopia. But he is facing criticism after twice describing Ethiopia as having a democratically elected government despite the fact human rights groups have denounced Ethiopia’s democracy as a “sham.” In a recent election, for example, Ethiopia’s ruling party won 100 percent of the country’s 547 Parliament seats. Human Rights Watch criticized the government in a recent report, writing, “Authorities use arbitrary arrests and politically motivated prosecutions to silence journalists, bloggers, protesters, and perceived supporters of opposition political parties.” We speak with Horace Campbell, professor of African-American studies and political science at Syracuse University. He has written extensively on African politics. His new piece for CounterPunch is called “Obama in Kenya.”

StoryDec 10, 2020Ethiopia’s PM Won the Nobel Peace Prize A Year Ago; Now He Is Leading Nation Into Possible Civil War

AMY GOODMAN: We turn now to President Obama’s historic trip to Africa, where he’s set to become the first U.S. president to address the African Union. On Monday, Obama made history by becoming the first sitting U.S. president to visit Ethiopia. But he is facing criticism after twice describing Ethiopia as a democratically elected government despite a recent parliamentary election when Ethiopia’s ruling party won 100 percent of the country’s 547 Parliament seats. Obama made the comment Monday during a news conference in Addis Ababa alongside Ethiopian President—Prime Minister Hailemariam Desalegn.

PRESIDENT BARACK OBAMA: We are very mindful of Ethiopia’s history and the hardships that this country has gone through. It has been relatively recently in which the constitution that was formed and the elections put forward a democratically elected government. And as I indicated when I was in Kenya, there’s still more work to do, and I think the prime minister is the first to acknowledge that there’s more work to do.

PRESIDENT BARACK OBAMA: Our security cooperation is pushing back against violent extremism. Ethiopia faces serious threats. And its contribution to the African Union Mission in Somalia have reduced areas under al-Shabab control, but, as the prime minister noted, yesterday’s bombing in Mogadishu reminds us that terrorist groups like al-Shabab offer nothing but death and destruction, and have to be stopped. We’ve got more work to do. This past week, Ethiopian troops have helped retake two major al-Shabab strongholds. We have to now keep the pressure on.

AMY GOODMAN: To talk more about the significance of President Obama’s visit, we go to Syracuse to speak with Horace Campbell, professor of African-American studies and political science at Syracuse University. He has written extensively on African politics. His new piece for CounterPunch is called “Obama in Africa.”

HORACE CAMPBELL: Well, thank you, Amy, and thank you for having us on the program.

I think this was a liberating trip for President Obama. And from the news coverage of his trip to Kenya, one could see that this was truly liberating for him. He called himself an African American for the first time that I heard him say. He called himself a Kenyan American. He was dancing, and there was genuine joy that he was having on this trip.

But one could see all around that President Obama was compromised. He was compromised because of the footprints of the United States in eastern Africa, especially in Kenya and Ethiopia and Somalia, in this mission that the United States has been on since 2001, which is what they call counterterrorism. And this counterterrorism operation that the United States has been involved with, that was called the war on terror, has led to the militarization of eastern Africa, with the epicenter of this war against the peoples of Somalia. And now the peoples of Kenya have been brought into this war.

And one of the things that the people of Kenya have called for is for complete demilitarization of this region. Yesterday—on Sunday morning, when President Obama met members of the opposition, they called for the withdrawal of Kenyan troops from Somalia. And I think this is something that the left in this country should agree on, that in every aspect of the relationship with the United States and the governments of Kenya, Uganda, Somalia, Ethiopia and South Sudan, we have the United States having the history of its military involvement and the history of counterterrorism unleashing forces that cannot be controlled.

So, yesterday morning, when Barack Obama sat down with the African Union, with the troika—Norway, United States and Britain—and with IGAD, all of the leaders of IGAD that were sitting at the table with Obama—the foreign minister of Sudan, the prime minister of Ethiopia, the president of Uganda and the president of Kenya—all have been involved in this militarization of the region. And we need conscious, clear guidelines and pathways how we’re going to bring peace to this region.

And I’m glad you pointed out in the lead-up to this segment about the compromise of the U.S. government with the Ethiopian leadership. The Ethiopian leadership is particularly despicable. It is a leadership that has violated the rights of the millions of Ethiopian peoples. Nearly one million Ethiopian women are sold or are sent as domestic slaves to Saudi Arabia. And the relationship of the Kenyan government to the majority of the—I’m sorry, the relationship of the Ethiopian government to the majority of the people is one of unbridled repression. So Obama was compromised by his relationship with those leaders of Kenya, Ethiopia, Uganda and the Sudan.

PRESIDENT BARACK OBAMA: Ethiopia has also been a key partner as we seek to resolve the ongoing crisis in South Sudan. Later today, the prime minister and I will meet with leaders from across the region to discuss ways we can encourage the government and opposition in South Sudan to end the violence and move toward a peace agreement. … The situation is deteriorating. The humanitarian situation is worsening. The possibilities of renewed conflict, in a region that has been torn by conflict for so long and has resulted in so many deaths, is something that requires urgent attention from all of us, including the international community.

PRIME MINISTER HAILEMARIAM DESALEGN: As regards to South Sudan, I cannot agree more with the president. But we should also recognize that this process has taken a long, long negotiation period. And on the other hand, the people are suffering on the ground, and we cannot let this go unchecked. And I think the meeting which we are making this afternoon has a strong signal and message that has to be passed to the parties in South Sudan, to see that [inaudible] first.

This report that was done last year by the African Union was supposed to be tabled at the African Union summit in June in South Africa. The Ethiopians blocked the report. It was only last week, Friday, on the 24th, before the meeting of Obama with IGAD, that the report was presented to the Peace and Security Council of the African Union. And it was not presented to the heads of state as it was supposed to be. It was presented to the foreign ministers, downgrading the importance of this report, which has far-reaching recommendations about how to demilitarize South Sudan; end the support of the United Nations, the NGOs and the troika for the military factions; that they need a transition government in South Sudan; they need at least five years of peace; and that we should not have this false dichotomy between sanctions and military intervention by the African Union. Of all the persons sitting at the table yesterday with Obama, the only person who was not compromised was the head of the African Union, Nkosazana Zuma.

We need to get this Commission of Inquiry, the information out there, debated at great length in Africa, because it comprised of the best brains in Africa. Even the member of the leading left force in East Africa was a member of this Commission of Inquiry. So we need to have a clear roadmap of how to demilitarize the situation in South Sudan. Unfortunately, President Obama, his advisers, like Gayle Smith and Susan Rice, will not be in a position to give the kind of advice that can lead to the demilitarization of the situation in South Sudan.

AMY GOODMAN: Professor Campbell, we have less than a minute, but can you compare the U.S. presence in Africa with China’s presence?

HORACE CAMPBELL: I think it’s very difficult to compare, because the case of the Chinese, the Chinese are bringing real, concrete support for infrastructure development, and the Chinese have the capacity at the financial level to invest in infrastructure. What the United States has invested in, and the United States and the West has the upper hand, is at the cultural and ideological level, at the level of ideas, about how to organize society, at the level of language, and, most importantly, the role of the church, the role of religion. The Chinese can never compete at the cultural level with the investment of the Western religious institutions, especially the born-again religious forces. And these born-again religious forces are the forces that are spewing hate around Africa and spewing hatred for same-gender-loving persons. So what one needs is for the progressive forces in the United States to be able to push an agenda so that the United States and China and the progressive forces can work for the rights of women, the rights of youth and for the rights of what Obama said he was working for, entrepreneurs, that this is not for the entrepreneurs of private equity, but for the ordinary businesspersons in Africa who want to uplift the standard of living of the African people.

AMY GOODMAN: Horace Campbell, I want to thank you for being with us, professor of African-American studies and political science at Syracuse University. We will link to your new piece at CounterPunch headlined “Obama in Africa.”

This is Democracy Now! When we come back, we speak with a journalist who was recently released from an Ethiopian jail and wrote a book, 438 Days: How Our Quest to Expose the Dirty Oil Business in the Horn of Africa Got Us Tortured, Sentenced as Terrorists and Put Away in Ethiopia’s Most Infamous Prison. Stay with us. 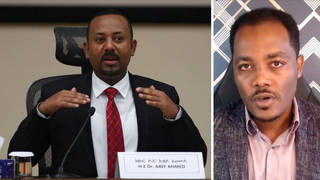 Ethiopia’s PM Won the Nobel Peace Prize A Year Ago; Now He Is Leading Nation Into Possible Civil War