In Guatemala, the Legislature voted unanimously to strip President Otto Pérez Molina of immunity from prosecution, clearing the way for his arrest. The ruling echoes the decision by the country’s Supreme Court last week and makes it possible to prosecute Pérez Molina as part of a corruption investigation that has sparked protests calling for his resignation. We’re joined from Guatemala City by Allan Nairn, a longtime journalist who has covered Guatemala since the 1980s.

AMY GOODMAN: We go now to Guatemala City, where the Legislature has voted unanimously to strip Guatemalan President Otto Pérez Molina of immunity from prosecution, clearing the way for his arrest. The ruling echoes the decision of Guatemala’s Supreme Court last week and makes it possible to prosecute Pérez Molina as part of a corruption investigation that’s sparked protests calling for his resignation. Carlos Herrera, an official of the Guatemalan Congress, announced the results of the vote.

CARLOS HERRERA: [translated] Votes in favor, 132. Votes against, zero. Deputies absent, 26. And so, having a majority, approved, the measure advancing the pretrial process against Otto Pérez Molina, president of the republic of Guatemala.

AMY GOODMAN: Pérez Molina is now prohibited from leaving Guatemala, and a warrant could be issued for his arrest. This is Guatemalan Attorney General Thelma Aldana.

ATTORNEY GENERAL THELMA ALDANA: [translated] At this moment, he is a normal citizen, although he is still president of the republic. He is a normal citizen for the justice system. He has lost immunity. And as a consequence, there could be criminal prosecution against the president.

AMY GOODMAN: For more, we go to Guatemala City, where we’re joined by Allan Nairn by telephone. He’s a longtime journalist who has covered Guatemala since the ’80s.

Welcome to Democracy Now! You were outside Congress last night when Congress stripped the Guatemalan president of immunity. Can you talk about the significance and the reaction?

ALLAN NAIRN: Well, people were cheering, they were crying, setting off fireworks. This is an example for the world. This is a general we’re talking about, one of the generals—one of the U.S.-backed generals who carried out the massacres that devastated the Mayan population of the northwest highland. I met him in the highlands as he was doing that, and his troops described how they strangled, executed civilians and threw them into mass graves. He then became president. Prior to that, he was placed on the CIA payroll. And now he’s going to be treated like a common citizen, and perhaps a common criminal. He could be taken at any moment by the authorities.

Last night after the verdict, I walked by the Casa Presidencial, the presidential house—it’s the White House of Guatemala—and spoke to a soldier outside who is a member—a corporal of the presidential guard. And I asked him how his unit would react if the Ministerio Público, the justice department, comes and tries to arrest the president, Pérez Molina. And he said they would not resist. They would take their orders from the Ministerio Público. This is remarkable, looking at Guatemalan history, because outside—that very building that we were standing outside of was for years the national torture chamber of Guatemala. People would be dragged there if they criticized the army, if they criticized the rich, if they were seen as being too close to the organized indigenous population, and they would be chopped up, they would be electroshocked. Their bodies would be thrown by the roadside with their hands cut off. This work done by the—what’s called the Archivo and by the G-2, the military intelligence service, that had actual American CIA agents placed inside it. And now, soldiers from the presidential guard, from that very place, are saying they’re not going to stop one of the generals who carried out those atrocities being arrested.

His arrest, though, would only be on corruption, but it opens the door to bringing him to trial for the mass murders that he helped preside over while carrying out the program of genocide of General Ríos Montt. But there’s still a long way to go. It was big surprise that Congress stripped his immunity. The unanimous vote was in some ways deceptive, because the big blocs in Congress which are controlled by the oligarchs, the drug traffickers and the army, did not want to strip him of immunity. They don’t want to open the Pandora’s box of looking into the crimes of the army and the oligarchy. But they felt such massive public pressure, that in the end they felt they had no choice.

AMY GOODMAN: You talk about Otto Pérez Molina being involved in murder of indigenous people in the northwest highlands, Allan Nairn, but what these protests are about are corruption, why his vice president has now been arrested, as well as other officials. So, do you see this possible indictment getting larger? And are people calling for that?

ALLAN NAIRN: Corruption has kicked open the door. Now, what could follow is mass murder, a prosecution for mass murder. Just about everyone I talk to on the street raises that issue. And under Guatemalan law, an ordinary citizen can go to a court and file a criminal case. And now that Pérez Molina has been stripped of immunity, anyone can step forward and file criminal charges against him for the slaughter in the Ixil zone in December of ’82, when slaughter that occurred, and I was there talking to Pérez Molina and talking to his—talking to his troops. So that now becomes a possibility.

And part of it—if that goes forward, and part of it is dependent on the action of state prosecutors—if the state prosecutors go forward, I would also urge them to look at charging not just Pérez Molina, but also his U.S. sponsors, the Americans who worked as military and intelligence liaisons with the Guatemalan army as they were murdering civilians, and also high American officials who set the policy in Washington. They can be charged as accomplices to murder. As President George W. Bush said, if you arm a terrorist, if you fund a terrorist, you are a terrorist. I think President Bush had a point, and that he should be subject to that same rule, that same principle, and that now that Guatemala has kicked open the door, set an example for the world, this trail of blood can be followed wherever it leads, including back to Washington.

AMY GOODMAN: Allan Nairn, I want to thank you for being with us, journalist and activist, has covered Guatemala since the 1980s. If you want to read a transcript of this conversation—I know that the phone line was rather difficult into Guatemala City—you can go to democracynow.org. You can also see our interviews with him in Spanish on our Spanish website. Just go to democracynow.org/es.

This is Democracy Now! When we come back, Kissinger’s Shadow. We’ll be joined by the historian Greg Grandin. Stay with us.

With a Record Backing Coups, Secret War & Genocide, Is Kissinger an Elder Statesman or War Criminal? 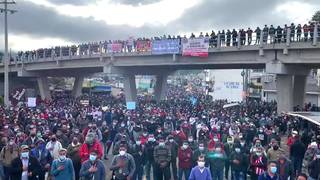