Climate change has been a key focus of Pope Francis’ visit to the United States. During his address to Congress on Thursday, the pope said, “Now is the time for courageous actions and strategies, aimed at implementing a culture of care and an integrated approach to combating poverty, restoring dignity to the excluded, and at the same time protecting nature.” We speak to Kumi Naidoo, executive director of Greenpeace International.

JUAN GONZÁLEZ: Climate change has been a key focus of the pope’s visit to the United States. During his address to Congress Thursday, Pope Francis called on Congress to address climate change.

POPE FRANCIS: In Laudato Si’, I called for a courageous and responsible effort to “redirect our steps” and to avert the most serious effects of the environmental deterioration caused by human activity. I’m convinced that we can make a difference. I’m sure. And I have no doubt that the United States and this Congress have an important role to play. Now is the time for courageous action and strategies, aimed at implementing a “culture of care” and “an integrated approach to combating poverty, restoring dignity to the excluded, and at the same time protecting nature.”

AMY GOODMAN: That’s the pope in his unprecedented address to the U.S. Congress. Our guest now is Kumi Naidoo, executive director of Greenpeace International.

The significance of what the pope has been doing over the last months, both the release of the encyclical on the environment and climate change and what he is saying here in the United States, Kumi?

KUMI NAIDOO: I think it’s groundbreaking. It’s a game changer. It is bringing a whole range of new voices to the climate movement. For example, two weeks after he released the encyclical, the Dalai Lama at the Glastonbury Festival in the U.K. came out and endorsed it in its entirety. Three weeks later, Muslim religious leaders gathering in Istanbul made a similar commitment. And what’s important is, is he’s using words that we need to redirect our steps, we need to act with courage. And that’s what the current moment calls for.

And so, what’s important about the way he’s addressed climate change is it’s brought together with inequality, social exclusion and poverty. And when he talks about redirecting the steps, we have the financial knowledge, we have the technical knowledge. We know, just a few days ago, Greenpeace brought out a report with a range of other organizations, where we’re talking about, by 2050, we can have 100 percent renewable energy access for all, with about [ 20 ] million more jobs being created. And what makes good economic sense, what makes good environmental sense is what should happen.

And Americans and people all over the world now must ask themselves: Why are we not changing? And I must be blunt, that those that control the decision making in this country are the fossil fuel industry. They have a disproportionate influence. And those that are making money from the current system are holding us back. But I think the pope’s intervention is going to give us a important impetus to change the dynamic and hopefully bring us closer to a climate solution in the context we are running out of time.

JUAN GONZÁLEZ: And yet he was speaking, you could say, literally, in the lion’s den, when it comes to climate change, because you have basically a Republican-controlled Congress, many of whose members even deny the existence of climate change. And yet they were applauding him. It was amazing hypocrisy there at certain levels.

KUMI NAIDOO: Absolutely, but, you know, what I’m hoping, in the context of the importance of dialogue that we need, within the United States, but also globally—I mean, at Greenpeace we’ve been saying that we can turn climate change into an opportunity, for some time now. And so, what we mean by that is that, you know, we’ve far too long lived in a world of North-South, East-West developing. We need to realize that we get this right as a united human family—our common home, as the pope calls it—and we address it with courage, and we secure the future of all our children and their children.

If we get it wrong, and we don’t act fast and now, then it’s true that people in poor countries, who are least responsible—I’ve just come from the Pacific, right? I was in Kiribati. And to see how people have already been impacted, to see a whole country, with 100,000 people, who are two meters above sea level, and they are planning, on the one hand, for the possibility of extinction, but on the other hand, they’re planning with resilience and dignity, saying, “We’re going to fight, you know, as hard as we can.”

And one of the things that I hope will happen in the next days here at the U.N. is that we need to revisit this two degrees question, because you’ll remember, Amy, in Copenhagen in 2009, there was a big debate about whether the amount of warming we can have is one-and-a-half versus two degrees.

KUMI NAIDOO: Two degrees centigrade, yeah. And so—and small island states, least developed countries are always saying one-and-a-half. And the dominant countries of the world, U.S. included, prevailed, and the language was “as far below two degrees as possible.” But now people just say two degrees. And the slogan that the people are chanting in the Pacific is “1.5 to stay alive.” That’s the slogan. Right?

So, basically, I think, in the U.S., I make an appeal to the Republican leadership that we—you have to look at your children and your grandchildren in the eyes, because this is not about saving the planet. To be blunt about it, the planet does not need saving. If we continue the way we are, we’ll warm up to the point where humanity will be gone, the planet will still be here. And quite frankly, if we’re out of the way, the forests will replenish, the oceans will recover and so on. So they need to understand that intergenerational solidarity is also at play. And I hope they will have—the pope will have a positive impact on the Republican leadership. But let’s be blunt about it: Not all Democrats are on message on climate, either. And I hope that the recalcitrant Democrats will also get with the message.

China to Implement a Cap-and-Trade System to Fight Climate Change — Is It Enough?

NEXTChina to Implement a Cap-and-Trade System to Fight Climate Change — Is It Enough? 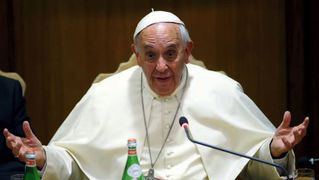