“A Travesty”: Is Japan’s Apology to Korean “Comfort Women” an Attempt to Silence Them?

Late last month, Japan and South Korea reached a deal aimed at addressing the demands of so-called comfort women forced into sexual slavery by the Japanese military during World War II. The deal includes an apology from Japanese Prime Minister Shinzo Abe and a more than $8 million fund for survivors. Survivors have said the deal falls far short of their call for Japan to admit legal responsibility and pay formal reparations. The deal has been met by protests in Seoul.

AMY GOODMAN: Before I say goodbye to you both, I want to ask you a different question, Christine Ahn, and it has to do with what happened late last month—Japan and South Korea reaching a deal aimed at addressing the demands of so-called comfort women forced into sexual slavery by the Japanese military during World War II, the deal including an apology from the Japanese prime minister, Shinzo Abe, and a more than $8 million fund for survivors. Many survivors say the deal falls far short of their call for Japan to admit legal responsibility and pay formal reparations. Your response?

CHRISTINE AHN: Oh, it’s a travesty. It is a travesty that, basically, they are seeking to silence the surviving halmonies, the grandmothers that survived the sexual violence at the hands of the Japanese military when they were young girls, and to basically silence them and their government from ever speaking up about justice for them. They never got a formal apology from Japan. That is what they demanded. They are receiving $187,000 per survivor, and that won’t even go directly to them. And they’re demanding the removal of the girl statue, the bronze statue, in front of the Japanese Embassy in Seoul, that the civic groups have put up and installed, and which are being installed all around the world, including in San Francisco, Glendale and in New Jersey. It is just—it’s an abomination. It is basically throwing these “comfort women” under the bus for this political expediency.

And, you know, it’s amazing to me that this movement of “comfort women” were the ones that have, you know, galvanized the modern movement against sex trafficking, but also influenced really important laws today, such as U.N. Security Council 1325, that mandates that women, as the direct and the greatest effects of—who are disproportionately impacted by war, are—mandate to be at the peacemaking table, and these women, who have galvanized this movement and who have the most at stake and who have the most to say, weren’t even informed. And so, they were not at the peacemaking table. I think that, you know, this should be really called into question.

AMY GOODMAN: I want to thank you both for being with us, Christine Ahn, with Women Cross DMZ, executive director of the group, the global movement of women mobilizing to end the Korean War. And thanks so much to Joe Cirincione, president of Ploughshares Fund, the global security foundation, author of Nuclear Nightmares: Securing the World Before It is Too Late and Bomb Scare: The History and Future of Nuclear Weapons. We’ll link to your piece at CNN.com, “North Korea Doesn’t Have an H-Bomb.”

This is Democracy Now! When we come back, the Fort Dix Five. Stay with us. 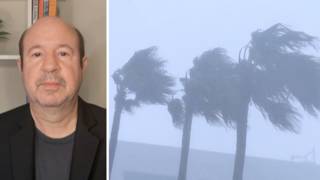