In 2008, the Duka brothers—Shain, Dritan and Eljvir—were among five men from suburban New Jersey who were convicted of conspiring to kill American soldiers at the Fort Dix Army base. The three are serving life sentences, but their supporters say the men were entrapped by the FBI. On Wednesday, the three brothers appeared in a courthouse in Camden, New Jersey, for a rare court-ordered hearing to determine whether they received a fair trial and effective representation from their lawyers. We bring you voices from a rally organized in support of the three Duka brothers and speak with Robert Boyle, attorney for Shain Duka.

AMY GOODMAN: On Wednesday, three brothers convicted in the case of the Fort Dix Five appeared in a courthouse in Camden, New Jersey, for a rare court-ordered hearing to determine whether they received a fair trial and effective representation from their lawyers. In 2008, the brothers—Shain, Dritan and Eljvir Duka—were among five men from suburban New Jersey who were convicted of conspiring to kill American soldiers at the Fort Dix Army base. Republican presidential candidate, New Jersey Governor Chris Christie, then U.S. attorney in New Jersey, was responsible for prosecuting the case, and often cites it as one of his crowning achievements. This is Christie speaking in 2007 from the steps of the federal courthouse in Camden, New Jersey.

CHRIS CHRISTIE: The philosophy that supports and encourages jihad around the world against Americans came to live here in New Jersey and threaten the lives of our citizens through these defendants. Fortunately, law enforcement in New Jersey was here to stop them.

AMY GOODMAN: However, social justice activists and several media outlets have cast doubt on the prosecution. They also question the merits of the case, which involved two government informants who, over 18 months, befriended the Dukas and attempted, unsuccessfully, to involve the brothers in a plot to attack the Fort Dix Army base. Only by ensnaring another friend of the Dukas to agree to participate in an attack was the government able to make a case of conspiracy against the Duka brothers, though none of them agreed to participate in or knew anything about the scheme. Shain, Dritan and Eljvir Duka were found guilty of conspiracy to kill members of the military at Fort Dix and sentenced to life in prison. In a video on the Fort Dix Five produced by The Intercept this past June, one of the government informants, Mahmoud Omar, said the Duka brothers were innocent of any crime.

MAHMOUD OMAR: [translated] I don’t know nothing about those guys. And I said that in court. Those Dukas, they didn’t do nothing, and I never heard nothing from them. They are good and kind people.

AMY GOODMAN: That was the informant. Well, now the brothers argue they didn’t receive effective counsel and their court-appointed attorneys dissuaded them from testifying, which they wanted to do, at their own trial. Supporters from several social justice groups held a vigil in support of the three Duka brothers before Wednesday’s hearing in Camden. Democracy Now! was there.

LYNNE JACKSON: I’m Lynne Jackson. I’m with the Fort Dix Five Support Committee. And we’re outside the federal court in Camden, New Jersey. What’s happening today is the Fort Dix Five were five Muslim men who were entrapped by the FBI, and today there’s going to be a court hearing for three of the men. They are brothers, the Duka brothers—Dritan, Shain and Eljvir Duka. These three men were convicted of a conspiracy that they didn’t know about, and they were given life sentences.

BURIM DUKA: My name is Burim Duka, the youngest brother of the Duka brothers. This hearing came about from the public defenders that my brothers have—that they had, not have. They told my brothers not to testify during the trial. And my brothers were trying to testify, they wanted to testify. They didn’t want to listen to the attorneys. The attorneys kept telling them, “Don’t testify. We’re not prepared for it.”

PROTESTERS: No justice! No peace!

MAHA HILAL: My name is Dr. Maha Hilal, and I’m from the National Coalition to Protect Civil Freedoms. I would hope that this case will shed light, but unfortunately it’s been quite difficult to prove the fact that there’s significant religious bias in all of these cases, that individuals are essentially being criminalized for being Muslim, that when they say things like “Allahu Akbar,” that’s a basis for which the government can choose to persecute these Muslims.

MAURICE AWA KHAN: My name is Maurice Awa Khan [phon.]. And this is, for me, one of the most heartbreaking cases, I mean, involving five young men who did nothing except, you know, enjoy themselves on a vacation in the Poconos, and then had their lives turned upside down because of the way that someone misinterpreted a videotape that they had given to a Circuit City store to have duplicated.

ZURATA DUKA: My name is Zurata Duka. I am the mother of the three sons—Eljvir Duka, Dritan Duka and Shain Duka. My sons, you know, they are strong, but, you know, especially Dritan, he was for six years in solitary, and they was far away from me. It was very hard for me. And Eljvir, too, now he’s about two, three years in solitary there, you know. It’s like they’re making like a mental, you know—it’s not abuse, but it’s abuse by the brain. And it’s very, very hard for me to listen, to see my sons to suffer like this, when they are innocent. We came in this country to support this country. My sons, they used to work on the roof, not to think about these things.

MAHA HILAL: We can no longer accept that the FBI is allowed to run around the country and entrap and surveil Muslims without any accountability and to continue to destroy Muslim lives, their families and the communities from which they belong. The family is lining up right now to go in the courtroom.

MUHAMMAD MULLICK: My name is Muhammad Mullick. I’m here in solidarity with the Fort Dix Five. I feel that there’s a great injustice that’s been committed. This is the context of Islamophobia, that’s rampant in this country. And as you can see, it’s early in the morning, it’s cold, but we’re here heated up for justice.

ERICA MINES: My name is Erica Mines. I’m a member and an organizer of the Philly Coalition for REAL Justice. We’re going in to show up to pack the courts in support of the Fort Dix Five and the Duka family.

FERKE DUKA: I feel so happy when I see all these people here. My first name is Ferke, Duka. I’m the father of Duka brothers. We’re going to see them in the court today. And I hope it’s going to be—they’re going to be together, all three of them, but I don’t know. It’s up to them. But we’re hoping for justice. And I hope we will prevail, God willing.

AMY GOODMAN: Special thanks to Democracy Now!'s Hany Massoud. We only have 30 seconds, Bob Boyle. You're Shain Duka’s appellate attorney. What is most important to understand? Then we’ll continue the interview and post it online.

ROBERT BOYLE: These were young men, young Muslim men, who were trying to earn a living, who were—did have certain ideas, vocally critical of U.S. policies in Muslim lands, but who did not engage in any illegal activity. It was only because of their religion and their thoughts that the FBI, with no proof of criminality, put two different informants, entrapped them into various conversations, but still never were able to prove an agreement to do anything. These are young men who are now serving life without parole under horrendous conditions.

AMY GOODMAN: The hearing will—the results will be given out in March?

ROBERT BOYLE: The results should be available in March. Thank you, yes.

AMY GOODMAN: We’re going to leave it there. Bob Boyle, we’ll continue the conversation at democracynow.org. 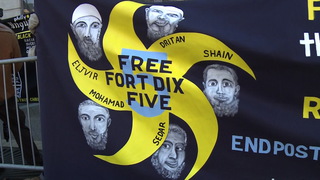