Shaun King on Colin Kaepernick: He is Enormously Courageous and Has Sparked a Movement Among Athletes

Shaun King, Black Lives Matter activist and the senior justice writer for the New York Daily News, discusses NFL quarterback Colin Kaepernick, who continued his protest Sunday against racial oppression and police brutality by kneeling on one knee during the pre-game national anthem ahead of his first game of the year for the San Francisco 49ers. His actions have sparked similar protests across the country among professional, college and even high school and middle school athletes.

StoryAug 27, 2020“The Games Will Not Go On”: Pro Athletes Strike for Black Lives, Bringing Leagues to Grinding Halt

AMY GOODMAN: We’re talking to Shaun King, Black Lives Matter activist, senior justice writer for the New York Daily News. Let’s turn right now to a story, Shaun, that you’ve been covering for quite some time, and that’s the NFL quarterback Colin Kaepernick, who started his first game of the year for the San Francisco 49ers this past Sunday. Before the game, he continued his protest against racial oppression and police brutality by kneeling on one knee during the pre-game national anthem. After Sunday’s game, Kaepernick defended his actions, which have sparked similar protests across the country.

COLIN KAEPERNICK: I don’t understand what’s un-American about fighting for liberty and justice for everybody, for the equality that this country says it stands for. You know, to me, I see it as very patriotic and American to uphold the United States to the standards that it says it lives by. You know, that’s something that needs to be addressed.

AMY GOODMAN: So, that’s NFL quarterback Colin Kaepernick. Shaun King, you’ve written so much about this in the New York Daily News and beyond. Your take?

SHAUN KING: Yeah. Well, I respect Colin a great deal, and it takes an enormous amount of courage to do what he’s done, to be able to protest police brutality and racial violence on an NFL field with millions of people watching. I think some of us have underestimated the courage that it takes, with so many eyeballs on you, to make that statement. But Colin is just trying to do what all of us are going, is to continue to keep these problems in the limelight so that we can get closer to having these solutions. He’s a brilliant guy. And I think when people think of NFL athletes, they forget that they are citizens of this country, that they are bothered by the problems that we all face. And so, Colin is enormously courageous. And he’s sparked a movement. And I think, in essence, in a lot of ways, there’s also a youth movement that is not being talked about. Kids in 38 states have taken a knee on football fields in high schools all over the country, high school volleyball teams, basketball teams and—

AMY GOODMAN: You wrote about 11- and 12-year-olds in Beaumont, Texas?

SHAUN KING: Yeah, absolutely. Young boys who play in a youth football league have done that and paid an enormous price, those kids. First their coach was suspended. And their coach was not just a coach, he was a father figure to them. He was suspended for the entire year. And then their season was disbanded by the league. And so, we’re finding a lot of people paying a huge price for taking a knee. And people continue to miss the point of why they’re doing it. It has nothing to do with war or military. It has everything to do with them just saying, “We want to use this moment that we have, while eyeballs are on us, to say how frustrated we are about injustice in America.” 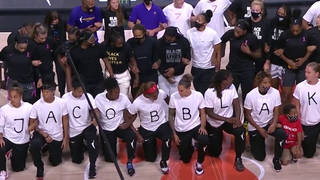 “The Games Will Not Go On”: Pro Athletes Strike for Black Lives, Bringing Leagues to Grinding Halt