The U.N. climate summit in Marrakech is taking place not far from the Mediterranean Sea, where thousands of refugees have drowned while fleeing war and famine, due in part to climate change. “One in 30 people will be displaced from their homes … unless we take action on climate change now,” says Asad Rehman of Friends of the Earth International. He discusses President-elect Donald Trump’s meeting with Brexit supporter Nigel Farage and notes that leaving would likely lower environmental standards in Britain.

AMY GOODMAN: Asad Rehman, you’re looking at the United States from the vantage point—well, here, we’re in Morocco, but of Britain, where you live. We discussed this very briefly yesterday, but one of the first world leaders that Donald Trump, the president-elect, met with at his penthouse, Trump Tower, was Nigel Farage, the man who pushed for Brexit. Can you talk about the significance of this? Right now there’s just a plan leaked by the British—out of the British government, that says Britain, even with a conservative prime minister, is not going to be ready to leave the European Union for many months. But the significance of Trump’s meeting?

ASAD REHMAN: Well, first of all, for many environmentalists and people who cared about justice within the U.K., we fought very strongly for the U.K. to remain within the European Union, largely because one of the arguments that was being made for leaving the European Union was a bonfire of regulation, a lowering of the environmental standards, and safeguards for everything from workers’ rights, maternity rights and, of course, inaction on climate change. And, of course, that was combined with a very extreme right-wing popular nationalism that was rooted in xenophobia and racism and anti-immigration feeling, similar very—very similar to, of course, what we heard within the United States. And I think, for many British people, they saw many parallels between the two.

And so, Nigel Farage meeting Donald Trump seems to be very much a parallel of both people speaking about a vision of the world which is really about a insular vision, which is about excluding people, and which isn’t about the kind of positive vision of people coming together to tackle the global problems. It’s very worrying, because not only are we seeing that with Nigel Farage and Donald Trump, of course, now we’re seeing some members of Donald Trump’s entourage saying that they should also be meeting with Marine Le Pen, the fascist leader of the Front National in France. And this is all normalizing a very racist discourse, hatred of people. And, of course, when we face climate crisis and all the other inequalities in the world, this is the moment we need more global cooperation, more solidarity, more justice and more empathy. So, it’s a—it’s definitely a step going backwards.

AMY GOODMAN: So, you’re talking about Marine Le Pen in France. A major target of hers is refugees. In the United States, we talk about immigrants; you could refer to them as “refugees.” What about the connection between climate and the world’s refugees?

ASAD REHMAN: Look, we know people leave for many, many different reasons and seek safe haven. And, of course, not far from here we—is the Mediterranean Sea, where each year over 3,000 people drown, escaping poverty, inequality and climate impacts, because of—climate change funds every other existing inequality. So when you speak to people about why they leave, and they say, “I can no longer grow food,” or, “I’m hungry,” that’s because weather impacts are making it impossible. Seventy-six percent of people in Africa rely on grain-fed agriculture. As extreme weather impacts on our weather systems, it drives people from their homes to cities and then, from there, onwards. But let’s remember, poorer countries provide safe haven to over 83 percent of displaced and refugee and migrant people; rich countries provide very little safe haven. And what’s worrying, of course, is that the response to the existing crisis is walls and fences. And as the U.N. itself has estimated, one in 30 people will be displaced from their homes in the coming decades, unless we take action on climate change now. So it’s a pressing issue, but it’s an issue that I don’t think has been addressed adequately.

The Pentagon Knows Climate Change is Real. Will Donald Trump Ignore the Science? 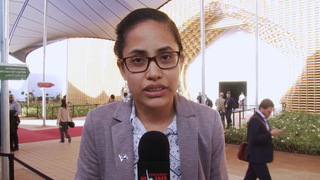