Jeffrey Sachs: The U.S. Will Become a Pariah State If Trump Pulls Out of Paris Climate Accord

As Democracy Now! broadcasts from the United Nations climate summit in Marrakech, Morocco, the U.S. special envoy on climate change, Jonathan Pershing, says no one from President-elect Donald Trump’s transition team has reached out to him to discuss U.S. climate policy. This all comes as the World Meteorological Organization is projecting 2016 to be the warmest year on record, and Trump has vowed to withdraw from the Paris climate agreement. “Legally he can’t, and politically it would be a disaster,” says economist Jeffrey Sachs, director of The Earth Institute at Columbia University. “If Donald Trump goes in the way that his rhetoric … ha[s] portrayed, we’re going to have a brawl in the United States.”

AMY GOODMAN: This is Democracy Now!, democracynow.org. I’m Amy Goodman, here at the United Nations climate summit in Marrakech, Morocco. French President François Hollande has called on President-elect Donald Trump to respect the Paris climate accord, saying the deal is irreversible. Trump is a longtime climate change denier, who has described global warming as a Chinese hoax. He has threatened to pull the United States out of the Paris deal. President Hollande addressed the plenary here in Marrakech Tuesday.

PRESIDENT FRANÇOIS HOLLANDE: [translated] The agreement was historic. And what we have to say here is that this agreement is irreversible. It is irreversible in law. It came into force on the 4th of November. More than 100 states, accounting for two-thirds of greenhouse gas emissions, ratified it. The United States, the largest economic power in the world, the second-largest greenhouse gas emitter, must respect the commitments they have undertaken.

AMY GOODMAN: That was French President François Hollande speaking at the climate talks here in Marrakech. As we broadcast, Secretary of State John Kerry is now addressing the summit. Donald Trump’s threat to pull out of the Paris climate accord has jolted the U.N. talks here. Earlier in the week, the U.S. special envoy on climate change, Jonathan Pershing, revealed no one from Trump’s transition team has reached out to him to discuss U.S. climate policy. This all comes as the World Meteorological Organization is projecting 2016 to be the warmest on record, smashing last year’s record.

We’re joined now by the economist Jeffrey Sachs, director of The Earth Institute at Columbia University. He served as an adviser to Bernie Sanders in his presidential campaign and continues to advise Bernie Sanders, who we just heard speaking outside the White House.

JEFFREY SACHS: Great to be with you and here.

AMY GOODMAN: So, talk about what it means to be in Morocco at the U.N. climate summit, and it seems like every third word out of people’s mouths is “Donald Trump.” Talk about his election and what it means for the issue of climate change.

JEFFREY SACHS: Well, first, there are 196 signatories of this Paris Agreement. They’re here. A hundred ninety-five of them have no doubt that they’re continuing forward. One place, with 4.4 percent of the world’s population—our country—suddenly is saying, “Well, we don’t know.” But I think, for the vast majority of the world, while they’re worried and dismayed by the words coming out of Washington and out of the team of the president-elect, there is a very clear determination that everything is going to move forward. And when I sit in the technical sessions here, there is no doubt that we’ve already passed the tipping point to a low-carbon economy. Things are moving. The technologies are moving. The innovations that I’m seeing here during this week by tremendous scientific innovators is absolutely phenomenal. So, they could try to go the other way, but they’re not going to succeed. It could be quite a pitched battle in our country.

AMY GOODMAN: Do you see the election of Donald Trump as—do you see his election for sure meaning he will become president of the United States? Let’s put it that way.

JEFFREY SACHS: I do, yes.

AMY GOODMAN: And here you have Hillary Clinton. Maybe she will have close to 2 million votes more than Donald Trump, more than Nixon in his victory, Kennedy in his victory, certainly more than Al Gore and the difference between Al Gore, who surpassed George W. Bush in 2000. Given that, what will happen now? You see mass protests in the streets all over the country, New York Times reporting today that Donald Trump’s transition team in disarray, already fired two of his top advisers. Jared Kushner, his son-in-law, seems to be in charge. They fired Chris Christie, who was the prosecutor who put Jared Kushner’s father in jail, and anyone related to him, to Christie, fired now. Your thoughts?

JEFFREY SACHS: Look, if Donald Trump goes in the way that the rhetoric, his rhetoric and others around him have portrayed, we’re going to have a brawl in the United States politically. It’s—everything will be tied up in tremendous political conflict. For instance, climate change. Bernie Sanders is absolutely right: Tens of millions of people will rally not to have the Earth wrecked. I’m not convinced that it’s all going to be the worst. So, I think we’ll see.

JEFFREY SACHS: Well, it just may not be, because it would be the end of his effectiveness as president right at the beginning. He said he wants to have a trillion-dollar infrastructure plan. I support that idea. We desperately need to build infrastructure. If he’s going to build the kind of infrastructure, like pipelines, that are never going to be used in the future, that are going to bankrupt the investors, that are going cost the taxpayers tens or hundreds of billions of dollars, it’s not going to happen. But if he says, “Ah, OK, we’ll build smart, but we’re going to build,” then something could happen.

AMY GOODMAN: Well, Trump has made no secret of his disdain for, for example, the Environmental Protection Agency. He promised to cut EPA regulations 70 to 80 percent.

JEFFREY SACHS: Look, I don’t want to defend the guy; I just want to say that let’s be ready to defend the right things, which is the climate change agreement, our need to move off of fossil fuels, our need to protect the natural environment, to protect the EPA functions. So of course we should be ready to be extremely active and fully engaged in that. All I’m saying is that maybe the worst isn’t going to happen, and he’ll see beforehand not to wreck his presidency from the start by going in a direction that’s opposed by the entire rest of the world.

AMY GOODMAN: Your thoughts on Myron Ebell, the person he’s put in charge of the—what? The EPA—

AMY GOODMAN: The transition team. He’s been described as the number one enemy to the climate change community. His own bio highlights how he’s been named a climate criminal by Greenpeace. He’s not a scientist himself—

AMY GOODMAN: —but completely denies the science, is proud of the support he’s gotten over the years by the oil interests.

JEFFREY SACHS: Look, we’re going to see the names that come forward. Some are absolutely frightening. I think that they’re put on the list just to ruin our day. But I think we’re going to see who the names are. That guy would be a disaster at EPA. But he’s not heading the EPA or being proposed for it, at least up until now. He’s just—he’s heading a team that supposedly is picking the new name. So, I am only saying that we should be ready for absolutely defending what are fundamental—

JEFFREY SACHS: Well, first of all, legally he can’t, and politically it would be a disaster, and diplomatically it would be a disaster. The whole world would put the U.S. as a pariah. What it means for me, first of all, is if terrible names are proposed, I expect the Democrats to filibuster, plain and simple. We cannot let people that are going to wreck the country, wreck the future, into office just because somebody’s named. We know that Democrats have a lot of power if they choose to use it. I expect them to use it. I expect Bernie Sanders and Elizabeth Warren and other progressive leaders to be saying, “We’re not going to let our country get wrecked.” That’s what politics is. 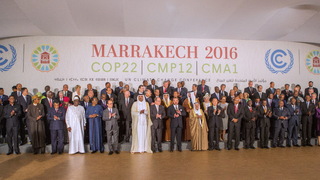