As Democracy Now! broadcasts from the U.N. climate talks in Marrakech, Morocco, we report that nearly 200 nations have agreed on a proclamation that declares implementation of the Paris climate accord to be an “urgent duty.” This comes just over a week after the election of Donald Trump, who has vowed to pull the United states out of the Paris Agreement and has called climate change a Chinese-created hoax. Meanwhile, climate activists staged protests targeting corporate sponsors of the climate talks.

StoryNov 16, 2016Jeffrey Sachs: The U.S. Will Become a Pariah State If Trump Pulls Out of Paris Climate Accord

AMY GOODMAN: We are broadcasting from the COP 22 here in Marrakech, Morocco. In what’s seen by some as a direct response to the election of Donald Trump and his rejection of climate science, nearly 200 nations have agreed on a proclamation here in Marrakech, Morocco, declaring implementation of the Paris climate accord to be a, quote, “urgent duty.” This comes just over a week after Trump was elected president. He’s vowed to pull the United states out of the Paris Agreement and has called climate change a Chinese-created hoax. Trump will soon become the only world leader who doesn’t believe in climate change. This is Aziz Mekouar, Morocco’s head negotiator at the talks.

AZIZ MEKOUAR: We call for all parties to strengthen and support efforts to eradicate poverty, ensure food security and to take stringent action to deal with climate change challenges in agriculture. We call for urgently raising ambition and strengthening cooperation amongst ourselves to close the gap between current emissions projectories and the pathway needed to meet the long-term temperature goals of the Paris Agreement. We call for an increase in the volume, flow and access to finance for climate projects, alongside improved capacity and technology, including from developed to developing countries. We, the developed countries, reaffirm our U.S.—our $100 billion mobilization goal. We unanimously call for further climate action and support, well in advance of 2020, taking into account the specific needs and special circumstances of developing countries, the least developed countries and those particularly vulnerable to the adverse impacts of climate change. We, who are parties to the Kyoto Protocol, encourage the ratification of the Doha Amendment.

TINA JOHNSON: And so, it just became the signifying opportunity and moment for this COP to say that, you know, no one country, no one man, no one person can control the outcome of the destiny that we all see as part of the writing on the wall, that climate change is real, we need to act, and that we’re going to do everything we can. So, yeah, I definitely think that the speeches over the last several days had that impact and effect on us as a civil society and over other countries, as well.

PRIME MINISTER FRANK BAINIMARAMA: I want to make a special appeal to the president-elect of the United States, Donald Trump, for a personal change of heart and a public change of policy on the issue of climate change. Sir, you have said that you do not believe that climate change is man-made and you intend, as president, to cut off America’s contribution to the global efforts to reduce carbon emissions. I am especially alarmed by reports that you intend to withdraw from the Paris Agreement, which would be disastrous for every person on Earth. I appeal to you to show the leadership that the rest of the world expects the United States to take on this issue. Please take another look at the overwhelming scientific consensus on the man-made effects of global warming.

Please come, as a matter of urgency, to see for yourself the devastating impact that rising sea levels and extreme weather events are already having on our peoples and our way of life. President-elect Trump, I formally invite you to Fiji and promise you the warmest of welcomes. We will show you how we’re already having to move entire communities out of the way of the rising seas, and you can meet the families of the 44 Fijians who were killed last February by the biggest tropical cyclone ever to make landfall in the Southern Hemisphere. I repeat, the world looks to America for leadership as we work together to confront this challenge to our survival and the well-being of our planet. President-elect Trump, I appeal to you, for humanity’s sake, to show that leadership and to join our common cause.

Vinaka vaka levu. I thank you.

AMY GOODMAN: That’s the prime minister of Fiji, Frank Bainimarama. He will be the president of the next COP, which won’t be held in Fiji, it’ll be held in Bonn, Germany. Meanwhile, climate activists have staged a series of actions here at the U.N. summit calling on world leaders to do more to address the climate crisis.

WINONA KISINO: Ixkwe aolep. My name is Winona Kisino, and I’m from the Marshall Islands. This is in the North Pacific. Right now, my people are the front line. We are affected by climate change. We’re feeling it right now. The islands is barely two meters above sea level. I’m speaking to you as a mother. I have two babies. Where will we go if our islands sink?

AMY GOODMAN: On Thursday, climate activists also staged protests here targeting corporate sponsors of the U.N. climate summit. They began by staging a die-in at the U.N. climate summit inside a pavilion sponsored by the Moroccan phosphate giant OCP. The action was led by the Indigenous Youth Caucus and SustainUS to raise awareness about the economic and health impacts of the company’s phosphates plant in the coastal Moroccan town of Safi. Protesters then moved on to occupy the booth of the Moroccan mining company Managem, a Moroccan mining company which runs a massive silver mine that’s been the target of protests for years by the indigenous Amazigh people of Imider.

PROTESTER: This action symbolizes indigenous and nonindigenous groups from both inside and outside of Morocco coming together to show the similarities of environmental atrocities communities around the world face. We wish to show how corporate sponsors of the COP contribute to greenwashing, while ignoring environmental racism and classism. At the same time, people who live in these corporate sacrifice zones sadly pay with their lives and livelihoods without ever experiencing the privilege to walk into this space and draw attention to the injustices committed against them.

KAYLA DEVAULT: Yá’át’ééh. I come from the Navajo Nation, and I have been at Standing Rock, while we were attacked by dogs and attacked with pepper spray. And since we are here in Morocco and we are guests of the people here, we thought it would be appropriate if we draw attention to the corporate sponsors, OCP and Managem, who are also causing similar atrocities not far from where the COP is right now. For example, in Safi, where we are actively polluting streams and rivers and oceans, where there used to be fishing opportunities for the people, who drop dead in the streets because they can’t breathe the air. Or for over here at Imider, where our brothers and sisters have been occupying a space 300 kilometers south of COP 22, because they are having their water drained in order to produce silver for an outside company, Managem. We would like everybody to please think of those people and think of their sovereignty and think of their rights, as they are sacrifice zones to corporate greed. Ahéhee’.

AMY GOODMAN: This is Democracy Now!, democracynow.org. When we come back from break, we’ll look at an issue that has barely received coverage here: the Moroccan occupation of the Western Sahara, which many consider to be Africa’s last colony. Stay with us. 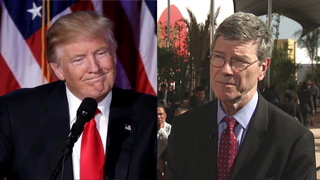 Jeffrey Sachs: The U.S. Will Become a Pariah State If Trump Pulls Out of Paris Climate Accord