We speak with Hina Shamsi, director of the American Civil Liberties Union’s National Security Project, about President-elect Donald Trump’s potential foreign policy positions, how he could expand Obama’s surveillance state and authorization of military force and reactivate the registry for immigrants from majority-Muslim countries, known as the National Security Entry-Exit Registration System, or NSEERS.

StoryAug 20, 2020“Don’t Let Them Take Away Your Power”: Obama Slams Trump at DNC & Warns U.S. Democracy Is at Risk

NERMEEN SHAIKH: I want to turn to Obama’s surveillance state and the authorization of military force and how it could be expanded under President Trump. During his meeting Tuesday with The New York Times, he also answered questions on foreign policy. When asked about his position on torture, Trump referenced a meeting he had with retired Marine Corps General James Mattis, considered a top pick for Trump’s secretary of defense. Trump stated, quote, “General Mattis is a strong, highly dignified man. I met with him at length, and I asked him that question. I said, 'What do you think of waterboarding?' He said—I was surprised—he said, ’I’ve never found it to be useful.’ He said, ’I’ve always found, give me a pack of cigarettes and a couple of beers and I do better with that than I do with torture.’” And Trump says, “I was very impressed by that answer.”

So, Hina Shamsi, can you tell us some of your concerns about what a Trump presidency will mean for questions having to do, for instance, with this proposed plan for a Muslim registry, although he’s gone back and forth on that, and it’s very unclear what precisely he means by it now, and what the origins, in particular, of this Muslim registry system are, when the system was first put in place, and what you think is the likelihood that Trump will be able to implement it?

HINA SHAMSI: Of course. So much to discuss here, Nermeen. And thank you for having me again.

You know, one of the latest aspects of controversy that have come out—and let me start off by saying that I think it’s very hard to know what the things are that candidate Trump proposed, which are deeply troubling and unconstitutional. We’ve analyzed many of these proposals and are poised to challenge them should they be put in place.

But let’s take this registry. And what it is, is what you referred to earlier in the segment as the NSEERS program. And this was put in place after 9/11, and it was a program that was aimed at non-immigrant males and required them to—men from 25 countries, most majority-Muslim countries, and required them to come in for fingerprinting and interrogation. It resulted in devastation. Approximately 13,000 people were slated for deportation. Families were torn apart. Small businesses were deeply, negatively impacted. The impacts continue in communities today.

Now, the program was discontinued in April 2011. It never, notably, resulted in any kind of criminal prosecution for terrorism, for example. And the Department of Homeland Security discontinued it and said that they were going to focus instead on targeting actual wrongdoing instead of these kinds of registrations and sweeps.

Now, recently, you know, it appears that this program is again under consideration. This is one of the things that candidate Trump talked about, that his advisers have talked about. And despite the fact that the program was stopped, there is a concern, a deep concern, one that is roiling minority communities around the country, that it could be reinstated. And so, there is one very important thing that the Obama administration can do, and the ACLU, over 200 organizations, colleagues around the country have asked for this, which is dismantle the regulatory framework that still exists for NSEERS and is still in place, and make clear that it served little to no purpose, so that this program may not be—will be harder to reinstate again, if the new administration is hell-bent on doing it.

NERMEEN SHAIKH: Well, I want to thank you very much for joining us, Hina Shamsi, director of the American Civil Liberties Union’s National Security Project.

When we come back, we turn to North—the Standing—to North Dakota, and we’ll be joined by two guests there. Please stay with us. 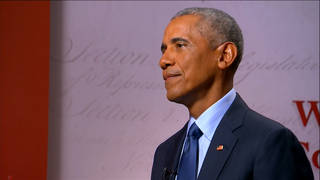 “Don’t Let Them Take Away Your Power”: Obama Slams Trump at DNC & Warns U.S. Democracy Is at Risk