Green Party presidential nominee Dr. Jill Stein has filed a lawsuit in efforts to force ballot recounts in Wisconsin, Michigan and Pennsylvania. On Monday night at the Free Library in Philadelphia, Democracy Now!’s Amy Goodman sat down with Vermont Senator Bernie Sanders to speak about the recount effort.

AMY GOODMAN: We return to my conversation with Senator Bernie Sanders of Vermont. We spoke Monday night at the Free Library of Philadelphia.

AMY GOODMAN: What do you think of Jill Stein’s demand for the recount, the Green Party’s demand—

AMY GOODMAN: —in Wisconsin, in Michigan, in Pennsylvania?

AMY GOODMAN: And now the Clinton campaign supporting it.

AMY GOODMAN: What’s the significance? What will happen? What can happen?

SEN. BERNIE SANDERS: You want me to tell you exactly what will happen? Well, I think—no, yeah, I think what most people expect is not much will happen, but we will see. But it touches on—so, in other words, all that they are doing is what happens all of the time. Nothing new about that. Recounts take place. When I was elected mayor, there was a recount. Right now in North Carolina, the Republican governor, who appears to be losing, wants a recount. Not a new idea. But I’ll tell you what it touches on, why it is touching a nerve, is not because I believe that it’s going to reverse the results. I don’t think that’s the case. But this is what people, especially with all of this barrage of attacks on websites and so forth, are really wondering, whether when they vote, is their vote legitimate? You know, and there’s talk: Have the Russians interfered in this thing? So that’s what it will deal, which takes us to another issue. And I wouldn’t have said this a few years ago, but I will say it tonight. I was just researching this. You know, in Canada, they still do their voting with paper ballots. And maybe it takes an extra hour or two to get the results out to the media, but they manage to survive. And I kind of think we should go back to paper ballots, lock them up. But I think—I think what this suit is about is touching on that issue and trying to see if the results end up being significantly different than what we were announced on election night. 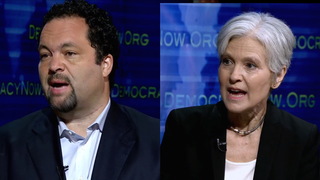