In Charleston, South Carolina, a jury has found Dylann Roof guilty on 33 counts of federal hate crimes for murdering nine black worshipers, including Pastor Clementa Pinckney, at the historic Emanuel AME Church in June 2015. The verdict, reached after the jury deliberated for less than two hours, came after 30 witnesses testified over six days. Roof embraced white supremacist views and was shown in photographs posing with the Confederate flag and a pistol. We speak to the late Reverend Pinckney’s friend, Reverend William Barber, head of the North Carolina NAACP.

AMY GOODMAN: Finally, I wanted to ask you about news from your neighboring state, South Carolina. On Thursday, jurors in Charleston found white supremacist Dylann Storm Roof guilty of 33 counts of federal hate crimes for shooting nine people dead at the historic Emanuel African Methodist Church on June 17th, 2015. Roof embraced white supremacist views, was shown in photographs posing with a Confederate flag and pistol, now facing the death penalty. Can you talk about Dylann Roof, as well as the rise of white supremacy that we’re seeing in the so-called alt-right? And your thoughts on him getting the death penalty, Reverend Barber?

REV. WILLIAM BARBER: Well, you know, it’s a complex conversation. Let me give a shout out to my good friend Dr. Lonnie Randolph, who’s president of the South Carolina NAACP, who has been fighting issues in South Carolina for a long time, and the people down there. You know, this is a very Shakespearean moment. You know, he was guilty. We know he was guilty. He confessed to being guilty. And now he’s been found guilty. And that is certainly a certain relief for the families.

But then, the irony of it is we’ve come through this campaign, this Trumpism, with all of this overt racism and othering, you know, this—at the same time we’re convicting Dylann Roof. We have a candidate, you know, who is now president-elect, who began his movement on birtherism and demeaning and denouncing the very birthright of our president. We have policies being proposed. We’ve got Jeff Sessions, who attempted to prosecute civil rights leaders for participating in registering people to vote, who is against voting rights and civil rights, who now will be possibly the attorney general. We have “alt-right,” or I call it alt-wrong, and Steve Bannon and white supremacists in the heart of the Oval Office. We haven’t seen that, at least that blatantly, since 1915, when Birth of a Nation was played in the Oval Office by Woodrow Wilson. And by the way, Dylann Roof was captured in Shelby, which is the hometown of the playwright who wrote the movie and the script for Birth of a Nation. And now we have this alt-wrong in the Oval Office, 100 years later, exact almost to the date. We’ve gone from Birth of a Nation in the Oval Office to “alt-right” in the Oval Office.

We have a rise in white supremacy, but we also have a rise in systemic policy. We have people being put in place that are going to do what I call destruction from the inside. Price over HHS, Health and Human Services, who I believe will do great damage to the Health and Human Services, will hurt many black people—and many white people. And we’ve come through this election where people have been divided by race and fear. You know, Donald Trump is not the first white man who has used racial division to be elected. This is not the first time America has dealt with a racist president. But what we should be surprised about is the ease at which he was able to use it in the 21st century and the way in which people bought the con and bought this racism and othering that we have seen now. So we’re in a troubling time.

And while Dylann Roof has been found guilty, lastly, Amy, South Carolina is still guilty. South Carolina, after those nine deaths—you know, my frat brother, Reverend Pinckney, was killed. He fought for more money for public education. The South Carolina Legislature has not passed more money for public education in his name. He fought against voter suppression. Nikki Haley supported voter suppression. And now she’s going to be an ambassador to other nations. He fought for the pulling down of the Confederate flag. The flag did not come down until nine people were killed, which, in an eerie way, sends the signal that only black death matters. You know, he fought for a living wage. He fought for healthcare expansion that would help black and poor white people in South Carolina. South Carolina is still guilty of not expanding healthcare and not raising their living wage and still having right-to-work laws, which are actually right-to-discriminate laws that keep labor unions out of the South.

So, yes, we have convicted Dylann Roof, but South Carolina and America is—we’re still guilty of systemic policy racism. And the only way we’re going to get at it is to have a massive fusion, moral movement in this country, particularly out in the South. And, Amy, on December 31st, we’re having a national watch night, Moral Revival Poor People’s Campaign Watch Night Service at Metropolitan AME Church in Washington, D.C., calling people to stand up against extremism, calling for a race-class audit that we will release on April the 4th, the anniversary of Dr. King’s death, and calling for, lastly, not a remembrance, but a re-engagement of the Poor People’s Campaign in 2017, 2018, all across the nation.

AMY GOODMAN: Reverend Dr. William Barber, we thank you very much for being with us, president of the North Carolina NAACP, Moral Mondays leader. Recent article in ThinkProgress, “We are witnessing the birth pangs of a Third Reconstruction.” We’ll link to it at democracynow.org.

When we come back, Andrew Bacevich joins us to talk about the generals in the Cabinet. Stay with us. 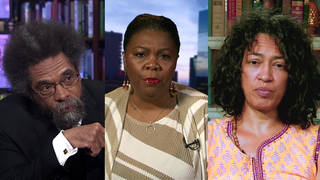