Did Trump Team Offer Ambassadorships in Order to Lure Celebrities to Perform at Inauguration?

According to a report published in the entertainment publication TheWrap, Donald Trump’s team not only wanted major talent for the inauguration, they attempted to up the ante by trying to bring in talent bookers with access to A-listers. The incentive? Offers of government posts and ambassadorships. According to TheWrap, at least two talent bookers were offered posts. We speak to the journalist who broke the story, Itay Hod, senior reporter for TheWrap.

AMY GOODMAN: Itay Hod, I also want to ask you about your article “Trump Team Dangled Ambassadorships to Lure A-List Inauguration Singers.” What did you find?

ITAY HOD: Well, we got a tip. And it sounded crazy at first, but we followed up on it, and we discovered that the Trump team was having such a difficult time finding any A-list stars—and he really wanted those A-list stars—that they quietly sort of approached talent bookers around Hollywood. Most of them are Democratic, you know, leanings. They’re all—this is Hollywood. It’s a very Democratic area. And so, in order to get them to help them to book these artists, they promised them—first we heard about cash and possibly government posts. We knew it was possible that it was an ambassadorship, but we waited until we were able to confirm it, and then we found out that they had offered at least two talent bookers ambassadorships, if they were able to help book those marquee names. They were looking specifically for the big names, the Katy Perry, the Bruno Mars, Justin Timberlake—all people who have been very vocal during the campaign and have actively—some of them have actively campaigned for Hillary Clinton.

AMY GOODMAN: Now, as you quote in TheWrap, Trump’s team denied offering any ambassadorships. Boris Epshteyn said, “There is no truth to this insinuation. First-class entertainers are eager to participate in the inaugural events.” Your response to that? You are not naming the people that you spoke to. You say, “[A]ccording to the insider, there was no ambiguity about the ambassadorship offer. 'My first thought was, “Are you joking?”' he said. 'But no, it was serious,'” he said.

ITAY HOD: Yeah, no. I mean, the response was expected. My question is: If there are so many people who are eager, why have we not found any in our reporting, and why hasn’t anyone come forward? It’s possible that they’re holding these names as a surprise, but so far we’ve seen no evidence of that whatsoever. In fact, what we do know is, the few people that he was able to wrangle—and I’m talking about Andrea Bocelli, I’m talking about other names—that have sort of agreed, have come forward, have said that they might participate, and after public pressure, after the articles came out, sort of backed out. So, right now all we know is Jackie Evancho. We know that The Rockettes perhaps will be performing. I’m assuming they’re gong to find enough volunteers. There is the Tabernacle Choir, the Mormon Tabernacle Choir. But other than that, we’re not really seeing those names that he had promised way head of this inauguration. So, it will be interesting to see who he’s able to get. I mean, it’s always possible that they might be able to get someone last minute. So far I’m not seeing any evidence of that, nor has any of our sources told us that they’ve heard anything of that kind. So, that’s where we see it right now. It will be interesting to see what happens on January 20th.

AMY GOODMAN: Well, as we wrap up, Autumn Withers, would you have performed?

AUTUMN WITHERS: I would not, absolutely not. I think having, you know, The Rockettes perform at the inauguration, the optics of that contributes to the normalization of the very derogatory things that Trump has said about women, and I cannot be a part of that. I could never do that.

AMY GOODMAN: Well, I want to thank you both for being with us. Autumn Withers is an actress, writer, founder of Hollywood Women’s Collective, was a member of The Rockettes, the Radio City Rockettes, from 2005 to '07. And, Itay Hod, we'll link to your pieces at TheWrap, both about the Trump team dangling ambassadorships to lure A-list inauguration singers, as well as your piece on The Rockettes.

This is Democracy Now! When we come back, The Drone Memos: Targeted Killing, Secrecy, and the Law. What kind of foundation has President Obama laid for President Trump when it comes to extrajudicial killings? Stay with us.

AMY GOODMAN: “Careless Whisper” by George Michael. The pop legend and gay icon has died at the age of 53. This is Democracy Now!, democracynow.org, The War and Peace Report. I’m Amy Goodman.

What Will Happen When Donald Trump Takes Over U.S. Drone & Targeted Assassination Program? 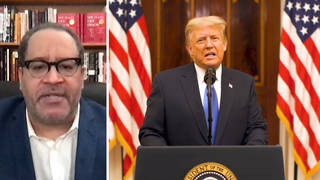