Report: After Legislative Coup, North Carolina Can No Longer Be Considered a Democracy

In North Carolina, a new report finds the state’s democratic institutions are so flawed, the state should no longer be considered a functioning democracy. The report by the Electoral Integrity Project, or EIP, points to extreme gerrymandering, voter suppression of communities of color and the recent stripping of power of incoming Democratic Governor Roy Cooper by Republicans. EIP gave North Carolina an electoral integrity score of 58 out of 100 points—similar to the scores of Cuba, Sierra Leone and Indonesia. We speak to Andrew Reynolds, professor of political science at the University of North Carolina at Chapel Hill. He is one of the founders of the Electoral Integrity Project.

JUAN GONZÁLEZ: In North Carolina, a new report finds the state’s democratic institutions are so flawed, the state should no longer be considered a functioning democracy. The report by the Electoral Integrity Project, or EIP, points to extreme gerrymandering, voter suppression of communities of color and the recent stripping of power of incoming Democratic Governor Roy Cooper by Republicans. EIP gave North Carolina an electoral integrity score of 58 out of 100 points—similar to the scores of Cuba, Sierra Leone and Indonesia.

AMY GOODMAN: Well, for more, we’re going to Durham, North Carolina, where we’re joined by Andrew Reynolds, professor of political science at University of North Carolina, Chapel Hill, one of the founders of the Electoral Integrity Project. His new article for The News & Observer is headlined “North Carolina is no longer classified as a democracy.” Reynolds has consulted in over 25 nations on issues of democratic design since 1991. His latest book, The Arab Spring: Pathways of Repression and Reform. Professor Reynolds is also the director of University of North Carolina’s LGBTQ Representation and Rights Research Initiative.

Professor Reynolds, welcome to Democracy Now! Why do you say that North Carolina is no longer a functioning democracy?

ANDREW REYNOLDS: I think if you look at North Carolina’s electoral process and you look at some of the more recent activities of the Legislature in suppressing access to the polls, taking some executive power back to the Legislature after the Republicans lost the governorship in the last elections, and also the systematic way in which redistricting in Carolina has removed competition from the electoral process, so incumbent state legislators now are beholden to their party leaders, the more extreme wings of their party membership, and not the voters themselves—when you add all these issues and elements together, we see North Carolina as an atrophying democracy, a semi-democracy, a pseudo-democracy, a place where democracy is on the decline, the vibrancy of institutions are getting weaker, and the population is more exasperated and alienated from the political process, because they feel it no longer reflects their will or their opinions about issues on a day-to-day basis.

So, we’re certainly not saying that North Carolina is an authoritarian state. We’re saying that if you compare it against many other democracies and semi-democracies in the world today, Carolina has become one of that middle-tier types of nation states or states that is struggling to have a democratic polity and is on the decline. And if we ranked North Carolina blindly, like a final exam where you didn’t look at the student’s name on the top, it would get ranked alongside some of these states that we certainly look down upon as nondemocratic. And so, the Electoral Integrity Project, I think, is a nice neutral, nonpartisan way of measuring the metrics of an election process. But my article was more about saying, let’s have a moment of self-reflection here. Let’s not presume that we in America or we in North Carolina are invulnerable to democratic decline, because it’s been going on for many, many years at a low level, and now, over the last couple of years, we’ve seen that decline rapidly speed up.

JUAN GONZÁLEZ: Well, Professor Reynolds, but some who take a more historical look at North Carolina would say that the state has always had a rogue role when it comes to democracy. I’m thinking, for example, of the infamous Wilmington coup of 1898, when in the—I think it was the only successful armed coup in American history, when a couple of thousand of white supremacists seized armed control of the town of Wilmington and removed at gunpoint all of the elected black officials at the town and killed about 60 African Americans, drove hundreds out of the town, burned down the local black newspaper and installed a former Confederate officer as the new mayor of Wilmington. That was a complete authoritarian armed coup that was never beaten back by the federal government. So North Carolina, especially over the issue of the racial composition of the state and the rights of African Americans, has always had sort of a checkered history when it comes to democracy.

AMY GOODMAN: And can you talk about states that you think are highly democratic?

AMY GOODMAN: No, states in this country. Compare North Carolina to other states. What would you see as a model?

ANDREW REYNOLDS: Well, at the end of the day, let’s talk about the elements that go into a vibrant democracy. That means that there is competition at election time. People aren’t drawed and gerrymandered into safe districts where they never have to listen to the voters. It means that access to the vote, to the polls, is as easy and as accessible as possible. So, what it means is that people are able to register, that they have the ability to vote, whether they’re from rich or poor communities, from majority or minority communities, from urban or rural communities. And it also means that government is responsive in the way that it runs the state government, it puts together the public affairs legislation, the public interest legislation, the issues of—that affect day-to-day people’s lives.

So, when you’re looking at vibrant democracies in America, you’re looking at states that do facilitate as much voting as possible and have a degree of competition. So I would immediately identify those states that have independent, neutral, nonpartisan delimitation commissions that are drawing the lines in a way that allows for a degree of competition at election time. And there are a number of states that have done that and are moving towards independent and nonpartisan commissions.

It has to be said that outside of America, there is no democracy in the world that allows politicians to draw the lines themselves. I mean, I remember a few years ago working in Pakistan and the Pakistanis being quite appalled at the fact that America allowed politicians to draw the rules of the game that they were being elected under. The Pakistanis felt that this was inherently undemocratic. And, of course, Pakistan has serious democratic problems, but they were looking at some of the failures in America.

So there are states in the U.S. that do a much better job at providing competition, and they do a much better job at facilitating everybody’s right to vote. Sometimes mail-in voting, sometimes electronic voting is important. But at the end of the day, the federal—the national Constitution is also going to constrain and craft the rules of the game. And in that case, every state is sitting under a national constraint, which actually makes it more difficult for them to be vibrant democracies.

JUAN GONZÁLEZ: Well, Professor Reynolds, you mentioned states that allow mail-in voting. There are three states—Colorado, Washington and Oregon—all of which use voting by mail exclusively. And they rank among the best states in terms of greatest democracy. Now, this would seem to go completely counter to the trends in states like North Carolina, which not only require you to vote in person, but also have stringent ID requirements or attempted to institute stringent ID requirements, as well. Could you talk about this whole issue of—is mail-in voting really safe from possible abuse?

ANDREW REYNOLDS: Well, it’s certainly as safe as any other voting system precluding possible abuse. No system is entirely invulnerable to voter abuse. But we actually find that voter abuse and voter fraud is very low in most established democracies under any system that they use. And we also saw that in the U.S. in November. So we’re not really talking about problems of voter fraud. That is often just a scapegoat issue for other power grabs. What we’re talking about are the broader rules of the game. And do the rules of the democratic game allow everybody to vote equally and give everybody the same chances getting to the polls on Election Day or before Election Day? Now, if there are requirements for voting, which may seem logical and rational and fair, such as identification or any other mechanism that a state wants to use, that’s fine. But they cannot be targeted at any one group in the society, any one majority or minority population. We’ve seen that in the worst authoritarian regimes and the countries that have lost their democracies, that the rulers target certain groups to marginalize them from their ability to vote. And they do that in quite sophisticated ways.

And that’s what we’re talking about in North Carolina, and that’s what we’re talking about in other comparable states, in that there has been an explicit attempt to use voter requirements to marginalize the votes of people who might vote for one party, and oftentimes that is the Democratic Party. So, we’ve even heard Republicans explicitly say that they wish to increase requirements on voting to stop black voting, to stop poorer communities voting. Sometimes, in their more candid moments, Republicans in North Carolina have been quoted about saying why they’re doing it, what is the rationale behind it.

So, mail-in voting is important and can be useful, as can electronic voting be useful. But at the end of the day, these are pieces of a much larger puzzle. There are so many democratic issues that need to be addressed. And all of them must be moving in the same direction to really bring back the vibrancy of democracy.

AMY GOODMAN: Andrew Reynolds, we want to thank you for being with us, professor of political science at University of North Carolina, Chapel Hill. We’ll link to your article in The News & Observer. It’s headlined “North Carolina is no longer classified as a democracy.”

This is Democracy Now! When we come back, you may be shocked what this CIA analyst will tell us about his interrogation of a president. It was Saddam Hussein over 10 years ago. Stay with us.

CIA Interrogator: At Time of U.S. Invasion, Saddam Hussein Was Focused on Writing Novel, Not WMDs

NEXTCIA Interrogator: At Time of U.S. Invasion, Saddam Hussein Was Focused on Writing Novel, Not WMDs 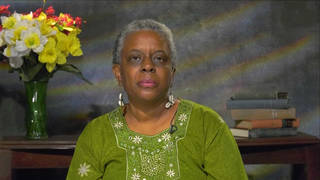