This week, Democracy Now! broadcast from Westerville, Ohio, near the headquarters of fast-food giant Wendy’s, where student groups, faith communities and labor organizers are calling for Wendy’s to join the Fair Food Program and respect the rights of farmworkers. The Fair Food Program was launched by the Coalition of Immokalee Workers in 2011. It ensures farmworkers access to shade and water, increased pay, as well as freedom from sexual harassment and forced labor. Although fast-food giants like McDonald’s and Subway have signed Fair Food Agreements, Wendy’s has refused—instead opting for their own “Supplier Code of Conduct,” which activists say is less stringent and has no enforcement mechanisms. On March 6, Fair Food advocates will convene at Wendy’s headquarters here in Columbus, Ohio, for a major demonstration, calling on the fast-food giant to establish more humane farm labor standards and fairer wages for farmworkers. We speak with Santiago Perez, a farmworker and member of the Coalition of Immokalee Workers, and Natali Rodriguez, a member of the Alliance for Fair Food. Democracy Now! invited Wendy’s to join us on our show but received no response.

AMY GOODMAN: This is Democracy Now!, democracynow.org, The War and Peace Report. We’re broadcasting from Westerville, Ohio, near the headquarters of the fast-food giant Wendy’s. Student groups, faith communities and labor organizers are calling for Wendy’s to join the Fair Food Program and respect the rights of farmworkers. The Fair Food Program was launched by the Coalition of Immokalee Workers in 2011. It ensures farmworkers access to shade and water, increased pay, as well as freedom from sexual harassment and forced labor. Although fast-food giants like McDonald’s and Subway have signed Fair Food Agreements, Wendy’s has refused, instead opting for their own Supplier Code of Conduct, which activists say is less stringent and has no enforcement mechanisms. On March 6, Fair Food advocates will convene at Wendy’s headquarters here in Columbus, Ohio, for a major demonstration, calling on Wendy’s to establish more humane farm labor standards and fairer wages for farmworkers.

For more, we’re joined right now by two people. Santiago Perez is a farmworker and member of the Coalition of Immokalee Workers, and Natali Rodriguez is a member of the Alliance for Fair Food.

Democracy Now! invited Wendy’s to join us on our show, but we did not get a response.

We welcome you both to Democracy Now! Natali, why don’t we begin with you? If you can talk about what’s happening on March 6th?

NATALI RODRIGUEZ: Sure. On Sunday, March 6th, the Coalition of Immokalee Workers will be holding a protest here in Columbus, Ohio, beginning at 12:30 p.m. at Goodale Park. And this has been an effort between not just the CIW, but also people here locally, like the—our local ally base, Ohio Fair Food, along with many other local congregations, student groups, community organizations—a lot of people from Ohio trying to bring that message to Wendy’s that it is time that they join this program that defends the human rights of farmworkers.

AMY GOODMAN: Santiago, can you talk about your experience in the fields in Immokalee? How much do you get paid to pick tomatoes? Why does this campaign matter to you so much?

SANTIAGO PEREZ: [translated] I had the opportunity to work in the agriculture industry for many years. I come from the fields. What I saw in the fields was wage theft, discrimination, sexual harassment. And so, when you come from the fields, you get to see the reality that people are living. And these abuses are things that shouldn’t be happening. The way the agriculture industry is set up makes it fertile for things like modern-day slavery, for example. We’ve uncovered many cases like that over the years. And that is why I am doing this work with the CIW to make these changes.

The Fair Food Program is a unique program. It gives the opportunities for workers to be able to express their voice in what they’re experiencing in the fields. This is why we’re asking major food buyers to participate in this program. There are three demands that we’re making of them. The first is that they pay one extra penny for every pound of tomatoes that they purchase from the Fair Food Program. The second is that they also agree to a worker-created code of conduct, which also has a zero tolerance policy for modern-day slavery. It addresses things like sexual harassment and wage theft. And we also ask that worker participation, workers’ voice be allowed in the process.

There are currently 14 corporate buyers participating in the Fair Food Program, as well as 90 percent of the tomato industry of Florida. However, what we are working on right now is to get more corporate buyers to participate so that we are able to expand what this program is doing.

Wendy’s is a company that has refused to join the Fair Food Program. And what they are doing is taking advantage of the situation that farmworkers find themselves in. Wendy’s has published a code of conduct only for the purpose of public relations, but they don’t have anything that produces real conversations around the problems in the field. What Wendy’s is doing is removing their tomato purchases from farms that are participating in the Fair Food Program. And so what the means is that they’re evading responsibility.

On March 2nd, the CIW will be embarking on the Workers’ Voice Tour, a 10-day tour starting first in New York City, where we will be making a big announcement about a next point of escalation within the campaign. So we are inviting people to join us on that day to hear this announcement. After New York, we will be heading to Columbus, Ohio, where we are getting ready for another march of many people, and this is an effort that has been combined along with local churches, local organized community organizations and students.

And on Saturday, March 12th, we will be finalizing the tour in West Palm Beach, Florida, at 1:00 p.m. at Howard Park Community Center, where we are taking the message directly to Nelson Peltz, the board chairman of Wendy’s. That is also why we are asking for the participation of consumers, because consumers also have power over the way that these corporations run. And if consumers were to join these efforts, we could make even more changes—for example, like addressing the modern-day slavery that takes place in the fields.

AMY GOODMAN: Natali Rodriguez, can you talk about why Wendy’s is so central for you right now—the other corporations, you’ve actually got to sign on to a code of conduct—and what Wendy’s Supplier Code of Conduct means?

NATALI RODRIGUEZ: Absolutely. Wendy’s is—of the five largest fast-food corporations in the country, is the only one not participating in this program. Its competitors—Taco Bell, Burger King, McDonald’s and Subway—are all participating in the Fair Food Program. And so what that means is that Wendy’s has an enormous buying power, and by—the reason that Wendy’s is so crucial to this program is that they have the ability to make dramatic increases in the wages that workers are receiving, but more importantly, the workers’ protections that are defended in the fields. And they have an ability to do that, given their size.

AMY GOODMAN: How big are they?

NATALI RODRIGUEZ: They are among the—they are among the three largest—one of the three largest fast-food companies in the world, so definitely up there. And in regards to their Supplier Code of Conduct, which they released in November, it is one that has no teeth in comparison to the Fair Food Program. But not only that, it actually has no mechanism listed in it whatsoever to discuss any abuses that are—that farmworkers face in the fields, and so there is no process for workers to be involved in anything like that that may happen within their supply chain. But there’s also no process to support farmworkers if they are experiencing any problems.

AMY GOODMAN: And what does it mean to say that Wendy’s has decided to take fewer tomatoes from Florida and more from Mexico?

NATALI RODRIGUEZ: What we know is an announcement that Wendy’s has shared with some allies, is that they have chosen to remove their purchases from tomato fields in Florida that are part of the Fair Food Program. And so, by that, they are choosing to completely evade their responsibility. And you can only mean what that means—they are making that active decision to go to fields where workers’ rights aren’t protected, to go to fields where workers’ wages are not—have not been increased, where workers are not paid enough for the work that they do. And they have made that active decision.

AMANDA FERGUSON: We have been pressuring OSU administration to force Wendy’s off of campus. We’ve been pressuring Wendy’s itself on campus to sign the Fair Food Program. And it’s just great to be here and stand in solidarity with Michigan students, with Ohio Fair Food community, supporting farmworkers in—just get Wendy’s to do the right thing. … Recently, Student/Farmworker Alliance has launched a national boycott of Wendy’s, because they’ve started—yeah, OSU has been leading the boycott, but recently Michigan has signed on. And it’s snowballing. Universities across the country are organizing together in this boycott.

AMY GOODMAN: That’s Amanda Ferguson of Ohio State University, which is based here in Columbus, Ohio. Is that boycott still going on, Natali?

AMY GOODMAN: Santiago, how important to you is it when consumers get involved in this campaign?

SANTIAGO PEREZ: [translated] That is a good question, because it’s the consumers that have power over these companies. It’s consumers that every day make these companies even wealthier by purchasing from them. And so, for that reason, consumers have a lot of power to create changes within this campaign. Students have understood this really well, which is why students have launched a student boycott of Wendy’s, because they understand their role within the industry.

SANTIAGO PEREZ: [translated] We don’t work within the area of politics. But if we are touching on it, I will say that those kinds of things and what Donald Trump has said is—could be equated to the way that Wendy’s is rejecting the Fair Food Program. Building walls is not a solution. Rather, building bridges is what brings a solution.

AMY GOODMAN: Santiago Perez is a farmworker and member of the Coalition of Immokalee Workers, and Natali Rodriguez is a member of the Alliance for Fair Food. We’re broadcasting from Ohio, from Columbus, Ohio. Thanks so much for joining us. I’m Amy Goodman. 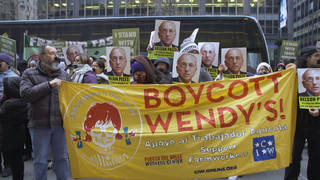