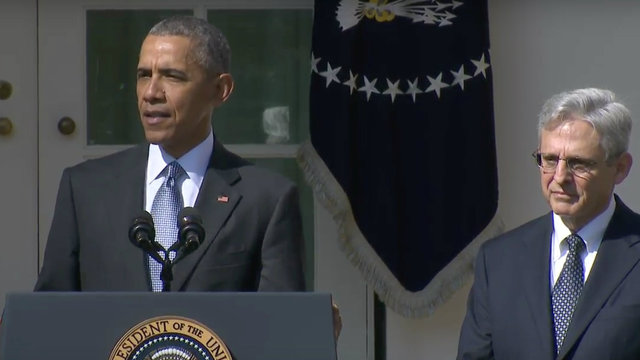 President Obama has nominated federal judge Merrick Garland to the Supreme Court to fill the vacancy left open by the death of Antonin Scalia. Widely seen as a moderate, Garland is the chief judge of the United States Court of Appeals for the District of Columbia Circuit.

Senate Republicans had vowed not to hold hearings or a confirmation vote on any nominee. But political pressure could force Republicans to back down. Last week, Senator Orrin Hatch praised Garland. He told Newsmax, “The President told me several times he’s going to name a moderate [to fill the court vacancy], but I don’t believe him. [Obama] could easily name Merrick Garland, who is a fine man.”

Reaction to the Nomination

NOW President Terry O’Neill: “Judge Merrick Garland, President Obama’s nominee for the Supreme Court, clearly possesses the qualities the President said he would look for—a rigorous intellect, impeccable credentials, and a record of excellence. Still, it’s unfortunate that President Obama felt it was necessary to appoint a nominee to the Supreme Court whose record on issues pertaining to women’s rights is more or less a blank slate. Equally unfortunate is that we have to continue to wait for the first African American woman to be named. For this nomination, the so-called political experts ruled that the best choice for the highest court in the nation was a cipher—a real nowhere man.”

People For the American Way Executive Vice President Marge Baker: “Judge Garland is a brilliant choice, and President Obama deserves credit for moving this process forward despite the GOP’s threats of obstruction. Garland has demonstrated a remarkable intellect and a deep commitment to the Constitution and the rule of law. It’s unfathomable that Senate Republicans would refuse to give fair consideration to a nominee as qualified as Judge Garland. The Constitution makes clear that the Senate has the responsibility to give fair hearings and a timely vote to whoever the president nominates to the Supreme Court. Republicans need to do their job and treat this nominee with the basic respect he deserves.”

Democracy for America Executive Director Charles Chamberlain: “It’s deeply disappointing that President Obama failed to use this opportunity to add the voice of another progressive woman of color to the Supreme Court, and instead put forward a nominee seemingly designed to appease intransigent Republicans rather than inspire the grassroots he’ll need to get that nominee through the Senate gauntlet.”

American Constitution Society President Caroline Fredrickson: “Like President Obama’s previous nominations to the Supreme Court, Chief Judge Garland is impeccably qualified to serve. His credentials cannot be questioned, he is a person of integrity and he would bring an understanding of how the world works to the nation’s highest court. These qualities will serve everyday Americans well and put the Supreme Court back at full-strength.”