“With hate-spewing Donald Trump closer than ever to the Republican nomination for President, it’s time to get real about a Basta Trump campaign,” writes Democracy Now! co-host Juan González in his new Daily News column. He discusses how leaders among the more than 50 million U.S. Latinos recently announced a major voter registration drive ahead of the November election. The Spanish-language network Univision has unveiled plans to use all of its radio and television stations to register 3 million new voters. González notes no one is angrier at Trump right now than young Latinos, who most feel the damage from his months of anti-immigrant and anti-Mexican rhetoric.

StoryNov 09, 2016What Happens Now to the Millions of Immigrants Facing Possible Deportation Under Trump?

AMY GOODMAN: Before we turn to the big Super Tuesday results, Juan, your piece in the New York Daily News, “Now is the Time for Latino Millennials to Vote.” Talk about this.

JUAN GONZÁLEZ: Well, you know, one of the interesting things about this election really is that Trump, especially now as he’s getting closer and closer to being seen as the likely Republican candidate for president, has been basing a lot of his campaign on building a wall with Mexico, attacking Mexico, attacking the immigrant community, and we’re seeing increasingly the impact on young people across the country, especially young Latinos. We’ve seen the reports in the last week of high schools in Iowa, in Indiana, where young white—young white students were saying, “Build a wall,” and “Trump, Trump,” and taunting fellow Latino students.

We’re seeing an enormous interest in this race by young Latinos across the country. And they are, especially the millennial Latinos, are the biggest, by far, growing sector of the American electorate. One-half of the 27 million eligible Latino voters, who are citizens and over the age of 18, are millennials. And it’s been a sharp increase, a 40 percent increase, just since 2008 in the number of eligible Latinos that could vote.

So the reality is that the issue of a registration drive, which many Latino leaders are now pointing out—you’ve seen Univision say that they’re going to use all of their television stations and their networks to promote a 3 million-voter registration drive among Latinos. I think what’s actually needed is more of a Freedom Summer campaign by the Latino youth of America, similar to what happened in the civil rights movement, that—where thousands of Latino youth go into their communities and say, “You’re not going to deport our parents. We’re American citizens, and we’re going to make a stand in terms of 'Basta Trump.'” And I think that that is increasingly the sentiment I’m hearing among Latino leaders across the country, that they’ve got to harness the millennial Latinos, who now represent—not only do they represent 50 percent of the entire potential [Latino] electorate, but that every year 800,000 young Latinos turn 18, and this is going to continue for years to come. So I think that that’s what the Republican Party is really very much afraid of, that Trump’s campaign is essentially digging a grave for the Republican Party in the future.

AMY GOODMAN: And we’re going to talk about Trump’s campaign right now, as well as the Democrats, on the Super Tuesday aftermath. 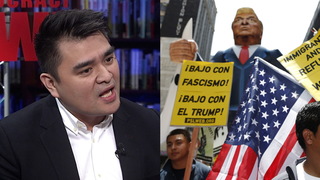