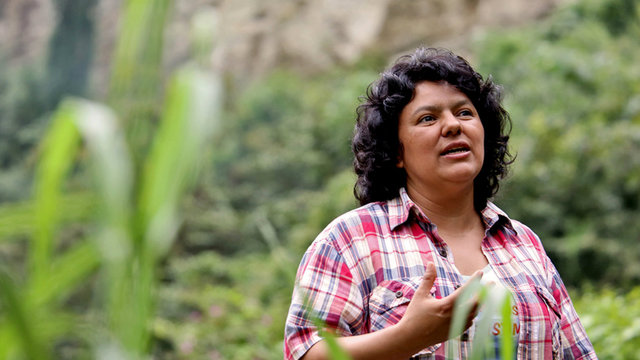 Honduran indigenous and environmental organizer Berta Cáceres has been assassinated in her home. She was one of the leading organizers for indigenous land rights in Honduras.

In 1993 she co-founded the National Council of Popular and Indigenous Organizations of Honduras (COPINH). For years the group faced a series of threats and repression.

According to Global Witness, Honduras has become the deadliest country in the world for environmentalists. Between 2010 and 2014, 101 environmental campaigners were killed in the country.

In 2015 Berta Cáceres won the Goldman Environmental Prize, the world’s leading environmental award. In awarding the prize, the Goldman Prize committee said, “In a country with growing socioeconomic inequality and human rights violations, Berta Cáceres rallied the indigenous Lenca people of Honduras and waged a grassroots campaign that successfully pressured the world’s largest dam builder to pull out of the Agua Zarca Dam.”

HONDURAS–At approximately 11:45pm last night, the General Coordinator of COPINH, Berta Caceres was assassinated in her hometown of La Esperanza, Intibuca. At least two individuals broke down the door of the house where Berta was staying for the evening in the Residencial La Líbano, shot and killed her. COPINH is urgently responding to this tragic situation.

Berta Cáceres is one of the leading indigenous activists in Honduras. She spent her life fighting in defense of indigenous rights, particularly to land and natural resources.

Cáceres, a Lenca woman, grew up during the violence that swept through Central America in the 1980s. Her mother, a midwife and social activist, took in and cared for refugees from El Salvador, teaching her young children the value of standing up for disenfranchised people.

Cáceres grew up to become a student activist and in 1993, she cofounded the National Council of Popular and Indigenous Organizations of Honduras (COPINH) to address the growing threats posed to Lenca communities by illegal logging, fight for their territorial rights and improve their livelihoods.

Berta Cáceres and COPINH have been accompanying various land struggles throughout western Honduras. In the last few weeks, violence and repression towards Berta Cáceres, COPINH, and the communities they support, had escalated. In Rio Blanco on February 20, 2016, Berta Cáceres, COPINH, and the community of Rio Blanco faced threats and repression as they carried out a peaceful action to protect the River Gualcarque against the construction of a hydroelectric dam by the internationally-financed Honduran company DESA. As a result of COPINH’s work supporting the Rio Blanco struggle, Berta Cáceres had received countless threats against her life and was granted precautionary measures by the InterAmerican Commission for Human Rights. On February 25, 2016, another Lenca community supported by COPINH in Guise, Intibuca was violently evicted and destroyed.

Since the 2009 military coup, that was carried out by graduates of the U.S. Army School of the Americas, Honduras has witnessed an explosive growth in environmentally destructive megaprojects that would displace indigenous communities. Almost 30 percent of the country’s land was earmarked for mining concessions, creating a demand for cheap energy to power future mining operations. To meet this need, the government approved hundreds of dam projects around the country, privatizing rivers, land, and uprooting communities. Repression of social movements and targeted assassinations are rampant. Honduras has the world’s highest murder rate. Honduran human rights organizations report there have been over 10,000 human rights violations by state security forces and impunity is the norm–most murders go unpunished. The Associated Press has repeatedly exposed ties between the Honduran police and death squads, while U.S. military training and aid for the Honduran security forces continues.

ColumnJul 08, 2021A Posthumous Measure of Justice for Berta Cáceres A Posthumous Measure of Justice for Berta Cáceres