“This is Not a Bathroom Bill, This is a Hate Bill”: Rev. William Barber on NC’s HB 2

Civil rights activists are planning to conduct a mass sit-in next Monday at the opening of the North Carolina legislative session to challenge the anti-LGBT law HB 2. We speak to the Rev. William Barber, head of the NAACP in North Carolina.

AMY GOODMAN: I want to ask, Reverend Barber, about the recent controversy around House Bill 2, or HB 2, in North Carolina. Speaking Sunday to NBC’s Meet the Press, the Republican governor, Pat McCrory, defended his decision to sign a law nullifying local ordinances to protect LGBT people. Governor McCrory said the law’s provision preventing transgender people from using the bathroom that corresponds to their gender identity was passed to fight, quote, “government overreach.”

GOV. PAT McCRORY: It was the left that brought about the bathroom bill, not—not the right, in the city of Charlotte, like the city of Houston tried to do, and it was rejected by 61 percent of the vote. The city of Charlotte passed a bathroom ordinance mandate on every private-sector employer in Charlotte, North Carolina, one of the largest—15th or 16th largest—cities in the United States of America. And I think that’s government overreach. It’s not government’s business to tell the private sector what their bathroom, locker room or shower practices should be.

REV. WILLIAM BARBER: Yes, he is my governor, but he’s wrong. He’s lining himself up on the side of the governors of the past who stood for segregation and discrimination. Now, let me be clear: They are shrewd. This is not really a bathroom bill. That’s the part we have to get to the public. This is a hate bill, where the transgender community is being used the same way that Jesse Helms used gay people and race in '84, when he was 40 points down in the polls and he was running against Jim Hunt. This is a poisonous brew. It's old-line, again, white Southern strategy politics.

Governor McCrory is not faring well in terms of his numbers and his positives. Many people see him as having been a very, very bad governor. He has presided over the worst voter suppression laws, the worst redistricting laws, the worst attack on unions, the worst attack on same-sex marriage. He cut more money from public education than any other governor before him and put North Carolina lower than Mississippi. He’s denied 500,000 people Medicaid expansion—346,000, by the way, who are white. The only state governor to cut the earned income tax credit, that even Ronald Reagan supported. So he’s not really a Republican, he’s an extremist.

But inside of that bill, Amy, section 2 denies a municipality or a city the ability to raise a living wage, require contractors to pay a living wage, to pay sick leave, to pay vacation and to have minority set-asides. So this is an anti-family, anti-labor, anti-worker bill, as well. In the third section, this bill disallows citizens of North Carolina from filing employment discrimination cases in state court. So this is a trick bill, and the transgender community is being used the same way black people were used in the past or Latino people. They are being scapegoated in order to pass all of these anti-poverty—anti-labor and anti-living wage parts of the bill.

AMY GOODMAN: Reverend Barber, very quickly; we have less than a minute. Bruce Springsteen canceled a concert in North Carolina. PayPal and Deutsche Bank said they would scrap plans for expansions in North Carolina. Against Me! singer Laura Jane Grace, who’s transgender, has announced that the band will perform their May 15th concert in Durham, North Carolina, as a form of protest. In these last 15 seconds, though, explain what you’re going to do after you leave this show today.

REV. WILLIAM BARBER: Well, we actually have a major sit-in on House Bill—on Hate Bill 2 on April 25th. You can go on the NAACP website. We want people to come. We’re doing a major sit-in to challenge it, to again show that this is fusion politics in reverse. This is wrong for what’s happening. This is nothing but race baiting and sex baiting in the middle of an election season. We’re fighting hard in the South. And I’m also leaving on a revival tour with Jim Forbes, Traci Blackmon and Sister Simone, with Nuns on the Bus, across this country, declaring that we need a revival. It’s time for a moral revolution of values in this country.

AMY GOODMAN: Reverend William Barber, I want to thank you for being with us, president of the North Carolina NAACP and Moral Monday leader. He is headed to the Capitol right now to the Democracy Awakening mobilizations, where he’ll participate in more mass civil disobedience. Over 900 people have been arrested in the last week.

This is Democracy Now! When we come back, could the seafood you eat have been caught by a slave? Stay with us.

Is the Seafood You Eat Caught by Slaves? Meet the Pulitzer Winners Who Broke Open a Global Scandal

NEXTIs the Seafood You Eat Caught by Slaves? Meet the Pulitzer Winners Who Broke Open a Global Scandal 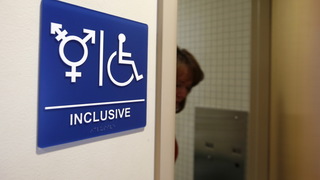