As North Carolina and Mississippi have passed sweeping anti-LGBT laws, with similar measures under consideration elsewhere, we look at a landmark law Utah passed last year that goes the other way. You might not expect it of one of the reddest states in the nation, but last year Utah was the only state to advance statewide nondiscrimination protections for LGBT people. Backed by the Mormon Church and passed with a Republican supermajority, the new law, dubbed “the Utah compromise,” sought to protect LGBT people from housing and employment discrimination. We speak with two people who played a key role in the law’s passage: Utah Democratic State Senator Jim Dabakis, the only openly gay member of the Utah Legislature, and Troy Williams, executive director of Equality Utah.

AMY GOODMAN: This is Democracy Now!, [democracynow.org], The War and Peace Report. Yes, we are on the road again, as Willie Nelson is singing, part of our 100-city tour. Today we’re broadcasting from the PBS studios of KUED, the studios at the University of Utah here in Salt Lake City. I’m Amy Goodman.

As North Carolina and Mississippi have passed sweeping anti-LGBT laws, with similar measures under consideration elsewhere, I want to turn to a landmark law here in Utah, which passed last year, that goes the other way. You might not expect it in one of the reddest states in the nation, but last year Utah was the only state to advance statewide nondiscrimination protections for LGBT people. Backed by the Mormon Church and passed with a Republican supermajority in the Legislature, the new law, dubbed “the Utah compromise,” sought to protect LGBT people from housing and employment discrimination. The Republican governor, Gary Herbert, spoke at the law’s signing.

GOV. GARY HERBERT: This has been something of a collaborative effort that’s brought us to this historic occasion, and I have no doubt that the eyes of the nation are upon us, as we have shown a way to resolve a somewhat contentious issue in a very satisfactory manner. And I do believe that what we’ve done here will become a model for the rest of the country of how they, too, can resolve these issues in their own respective states, as we find the right balance necessary to discourage discrimination, while protecting religious liberty.

AMY GOODMAN: Many have criticized the Utah compromise for not going far enough to protect LGBT rights. In an article for Slate, three law professors wrote, quote, “[T]he Utah legislation should not become a model for the nation. The bill contains troubling exemptions for religious groups, allowing them to continue to discriminate in ways that would be impermissible in many other states and under federal law. In particular, the Utah law specifically exempts religiously affiliated nonprofits such as schools, hospitals, and social service organizations.”

Well, for more, we’re joined by two guests who played a pivotal role in the passage of the LGBT antidiscrimination law here in Utah. State Senator Jim Dabakis is the only openly gay member of the Utah state Legislature. And we’re joined by Troy Williams, executive director of Equality Utah, formerly a very popular radio talk show host on KRCL, which is the community radio station where Democracy Now! broadcasts in Salt Lake City.

AMY GOODMAN: So, State Senator Dabakis, explain this law. You’re watching Mississippi. You’re watching North Carolina. You have a Republican supermajority in the Legislature, yet you passed this compromise. Explain what it is.

SEN. JIM DABAKIS: The roots go back to 2009 after Prop 8. And the church—the LDS Church, the Mormon Church, contacted me and said, “We would like to talk to the homosexual community.” And it had been after long years of us asking them. And a group of five of us sat down and began a dialogue, that continues to this day, where we have been able to build up some trust and build up relationships and build up a civic dialogue, to the point where, when negotiating, what we were negotiating got very dicey and very difficult, and it looked like it was going to fall off the table, and the lawyers were arguing de Tocqueville and Nazis and the rest. We were able to pull out the strength that we had gained over two or three years of regular communication and get a bill that passed the muster on our side as well as theirs.

AMY GOODMAN: And that bill says?

SEN. JIM DABAKIS: That bill says that it is illegal in the state of Utah for employees to be discriminated because they are LGB or T. And also, people cannot be discriminated in housing based on those classes, as well.

AMY GOODMAN: In housing or in employment. What about public accommodations?

SEN. JIM DABAKIS: We’re not there yet. I had a bill for public accommodation this last session.

AMY GOODMAN: And explain what public accommodations are.

SEN. JIM DABAKIS: Public accommodation just means anywhere the public goes—in a restaurant, in a hotel, renting a car. If you have a license to do business, you can’t discriminate. That hasn’t happened yet, but I’m an optimistic, hopeful guy, and I think we’re going to get there, as well.

AMY GOODMAN: Troy Williams, you’re head of the largest LGBT organization in Utah, Equality Utah. Your assessment of this bill? And talk about what it meant to get it passed.

TROY WILLIAMS: Yeah, it was called the Utah compromise in the press, and I don’t think that’s a fair analysis. It was really the Utah collaboration. Something unprecedented had happened in the state. We had the ceasefire in the culture war, and we all came together, Republicans and Democrats, religious people, nonreligious people, gay people, straight people, transgender people. And we worked together to pass a law to bring fairness for all. And that collaboration, that sitting around the table hashing out differences, focusing on our commonalities, that was the breakthrough. What are the things that we share in common? And when we were able to sort of hit those points, then we were able to make progress.

AMY GOODMAN: So, how have you managed, State Senator Dabakis, to prevent the passage of anti-LGBT legislation like we’ve seen in other states? Actually, you recently made headlines for staging a filibuster by sneezing in the Utah state Senate in order to stall an anti-LGBT law?

SEN. JIM DABAKIS: Well, all of the—all of the negative bills—the Indiana bills, the North Carolina bills, the Mississippi bills—that element is in our Legislature. And they’re always sneaking around trying to do their little bad deeds. Our sessions are 45 days. They must end exactly at midnight, no exceptions. And a bill—an innocuous bill that we had sent from the Senate over to the House, with just cleaning up work, had been added, very sneakily—the words “married couple” had been replaced with “man and woman,” and they did it when no Republicans [sic] were in the committee room. And so—

SEN. JIM DABAKIS: Yeah, no Democrats, yeah, were in the committee room. So, it passed there, came back over to the House—back over to the Senate for final passage. And it was so innocuous, nobody really looked at it. And it was pulled off the board at two minutes before midnight. And I just, for some reason—maybe divine inspiration, I’m not sure—I flipped up the bill and happened to see those words. So, we had two minutes to debate it, and it’s a roll call vote. And so they started, Adams and Bramble, and when it came to me, I just looked around, and the woman who was doing the roll call called my name twice and then three times and then four times. The president of the Senate, the presiding officer, figured it out, what was going on. And he said, “Pass him! Pass him! Pass him! Pass him.” And I just stood there. The woman didn’t quite understand “Pass him.” And I started sneezing. And by the time I was done sneezing and clearing my throat, the time was up, and the president hit the gavel, and that was the end of the session. So…

Will the Mormon Church Take Over The Salt Lake Tribune, Silencing an Independent Voice? 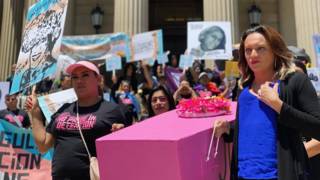