Why Did the Former Republican Gov. of New Mexico Join the Libertarian Party to Run for President?

We are on the road in Albuquerque, New Mexico, where we speak with the state’s former two-term Republican Governor Gary Johnson about why he is now running for president as a Libertarian. He could become the only third-party candidate on the ballot in all 50 states this year. Johnson was also the Libertarian nominee for president in 2012, but was excluded from almost all of the presidential debates in 2012. He is now suing the Commission on Presidential Debates. Johnson discusses his platform and says, “We should have choices in our own lives … as long as those choices don’t adversely affect others.” He notes he is pro-choice, and critical of U.S. military intervention and the use of drone strikes that have killed civilians and created “unintended consequences.”

AMY GOODMAN: “Alburquerque” by Neil Young. That’s right, and that’s where we are. This is Democracy Now!, democracynow.org, The War and Peace Report. I’m Amy Goodman. We are broadcasting from Albuquerque, New Mexico, from New Mexico PBS. New Mexico heads to the polls on June 7th. We’re joined today by four guests here. Former New Mexico Governor Gary Johnson, running for president as a Libertarian, was the Libertarian nominee for president in 2012. He was a Republican during his two terms as governor of New Mexico from '95 to 2003. Diane Denish is also with us, former lieutenant governor of New Mexico, who has endorsed Hillary Clinton for president. Jerry Ortiz y Pino is a Democratic New Mexico state senator. He's endorsed Bernie Sanders. And we’re joined by New Mexico State Senator Sue Wilson Beffort, who’s a Republican, has yet to endorse a particular Republican presidential candidate.

I wanted to go to, well, former Governor Gary Johnson, why you switched. Do you feel the Republican Party left you?

GARY JOHNSON: Yeah, well, I think that the majority of Republicans are—I think the majority of people in this country are classic liberals, which is being fiscally—speaking with a broad brushstroke, being fiscally conservative and socially liberal. Well, that’s the camp that I’m in. I happen to believe that most Republicans are in that camp also. But having participated in the 2012 election cycle, there was not one social conservative on stage, really. It was—it was not—it was not fair. What was not fair was, was that to be in the debates, the networks would say that you had to be at 2 percent in A, B, C and D polls. Well, when you’re not in A, B and C poll, that means in D poll you have to be at 8 percent. And the Republican Party did not stand up for me in that situation. Right now, running for president of the United States as a Libertarian, there is no way that a third party wins. There’s no way that I have a chance of winning, unless I’m in the presidential debates. There is the possibility of being at 15 percent in the polls, though, if I’m in the polls, that I could be in the presidential debates.

AMY GOODMAN: You know, it’s interesting. Last night, Donald Trump was encouraging Bernie Sanders to run as an independent. He was saying that the Democrats have treated him very badly. How would that play out?

GARY JOHNSON: Well, something that’s not being understood right now is, is that to run as a third party starting today, you will not be on the ballot in all 50 states. There’s a good chance that, starting today, if you were to run as an independent, you wouldn’t be in enough states to mathematically be elected be elected president of the United States, meaning 270 electoral votes. I was in a national poll here three weeks ago, Monmouth poll, at 11 percent. The legitimacy of having my name in that poll is, as the presumptive Libertarian nominee—Libertarian candidate for president is going to be the only third party on the ballot in all 50 states. If I’m the Libertarian nominee, I’m going to be the only third party candidate on the ballot in all 50 states, something that’s really being glossed over right now by everybody.

AMY GOODMAN: Very quickly, run through your platform. What distinguishes you from the Democrats and the Republicans?

GARY JOHNSON: Well, that I do believe that government is too big. It spends too much money. It tries to do too much, so it taxes too much. And when it taxes too much, it takes money away from me that I could spend on myself, for my own individual freedom and liberty, and then going to individual freedom and liberty. Look, we should have choices in our own lives on everything it is that we do, as long as those choices don’t adversely affect others.

AMY GOODMAN: So, are you pro-choice?

GARY JOHNSON: I am pro-choice. And then, when it comes to terrorism, there is a very real terrorist threat. But the fact that we put boots on the ground, the fact that troops are on the ground, the fact that we drop bombs, the fact that we’re flying drones and killing thousands of innocent people, I think that that is making the situation worse, not better. The unintended consequence of taking out Saddam Hussein, who was the check when it came to Iran—we take out Saddam Hussein, we cut off the head of the hydra, and, lo and behold, now we have Iran to deal with. But it’s on and on and on, when it comes to the unintended consequences of our military interventions.

AMY GOODMAN: You’re part of a lawsuit going after the Presidential Debate Commission?

GARY JOHNSON: Yes, on the basis that—on the basis of the Sherman Act, that politics is a business, that Democrats and Republicans collude with one another to exclude everybody else. We think that the discovery phase of this lawsuit is going to provide national insight into just how rigged the system is. I come back to the fact that 50 percent of Americans right now declare themselves as independent. Where is that representation?

2016 Roundtable: Ahead of June 7 Primary, New Mexico Politicians on Who They’re Voting for & Why

NEXT2016 Roundtable: Ahead of June 7 Primary, New Mexico Politicians on Who They’re Voting for & Why 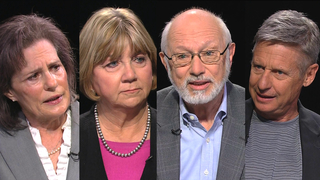 2016 Roundtable: Ahead of June 7 Primary, New Mexico Politicians on Who They’re Voting for & Why